Almost two years ago,  I featured a 1979 Muppet Show game. Today’s version, from 1977, is special to me because I actually owned it as a child. (I probably received it as a gift for my ninth birthday.)

Box: A colorful photographic array of Muppets and a large Muppet Show logo must have made this eye-catching in the toy aisle.

Board: It is meant to resemble a stage, with dressing rooms at the bottom and footlights at the top. Most squares are blank floor spaces, but others identify starting and stopping points for various “sets.”

This is a “set” for Veterinarian Hospital.

Various Muppets (including my daughter’s favorite, Janice)  show up in illustrated form at the very top of the game board. This illustration is similar to the one on the 1979 game box.

Pawns: These feature double-sided photographs of eight characters. They make up color-coded teams, and each player manipulates both members of his or her team.

Object: Getting your two pawns, plus the color-coded set associated with them, from their starting spots on the board to their ending spots near the footlights.

Here you can see dressing rooms, where characters start the game, as well as two starting points for sets. 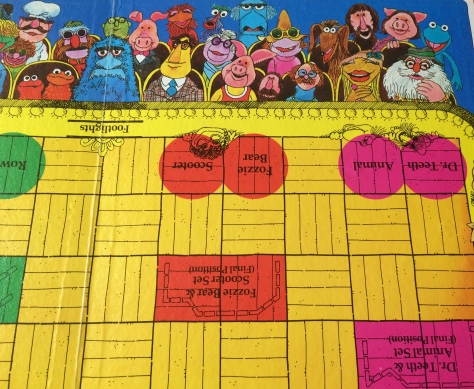 The photo above shows ending points for several characters and sets. 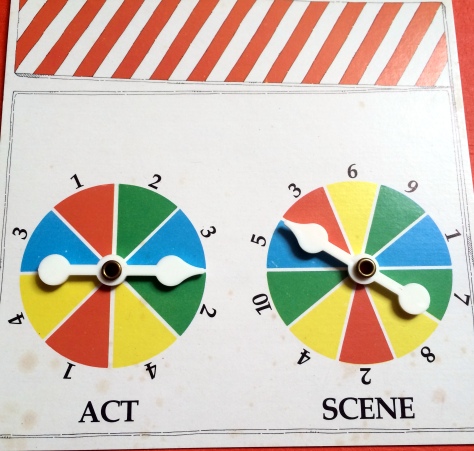 First, they use this double spinner to determine their act and scene numbers.

Then, they look that combination up in this script, which tells them how many spaces they can move either their set or one of their Muppets. They can move forward, backwards, sideways, and–if specifically told to do so–diagonally. Occasionally, they get a chance to move another player’s Muppet. They can also try to block other players with their own Muppets.

My Thoughts: This is a simple game, but the character pawns and unique way of moving them makes it fun to play.