I apologize for the unplanned hiatus from my Family Affair series. Health issues and a hectic day job put blogging on a back burner for a while. To increase the frequency of these posts, I am trying to cut back on their length, which has ballooned considerably since I started the series (and surely pushes into tl;dr category at times). Also, I’ve changed the series name to abandon the pretext that these posts will always appear on Fridays. I hope to bring them to you every week or two, on whatever day I get the chance.

“This establishment has style,” Dimsdale says. “It’s not quite Glenmore Castle, but…”

He also admires the way French manages the Davis children.

Especially when French opens the door to this.

The caller’s name is Gopher Resnick, and he has come to see Cissy.

Pay particular attention to the young man’s lack of footwear. Walking around the sidewalks of Manhattan in bare feet? Eww.

“Is it possible that this Gopher proposes to escort you to a public place?” French asks when Cissy arrives on the scene.

No shirt, no shoes, no date with Cissy, is French’s motto.

“You got something against feet, man?” an aggrieved Gopher asks.

In response, we get an all-time great Frenchism: “Not in their proper place, no. The cradle, the seashore, or the shower.”

When Gopher asks if French is “for real,” French assures him he is as real as the Davis front door–which he then closes in his face.

Cissy is relieved because she didn’t want to go out with Gopher anyway.

I would have lost all respect for her if she felt otherwise.

Alfred leaves soon after Gopher, but not before meeting Bill and letting him know that he’s looking for a position in New York.

We next see Bill in his office, where he has apparently acquired a new secretary.

Or, judging by the secretary’s robotic manner of speaking, built one.

She gives him his mail, which includes this shocking missive:

At home, Bill shows the letter to French.

French apologizes to Bill, but Bill says there’s no need–the letter is obviously the work of a “sick mind.”

The sick mind is soon at work again.

This time Cissy is the recipient of its ravings.

She heads straight to Uncle Bill, who informs her about the letter he received.

Cissy has a hunch about the culprit.

She thinks the shoeless wonder felt disrespected by French and is trying to get him fired.

Nobody puts Gopher in a corner, I guess.

Cissy heads to what is obviously the hippie section of Central Park.

But Gopher has only a vague recollection of French as “the cat with the beaver and the hangup about shoes.”

He’s been preoccupied thinking about his new girlfriend, Jenny. 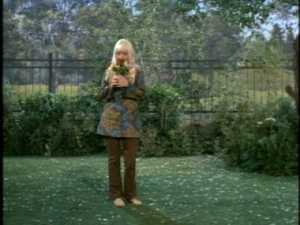 She’s a better match for him than Cissy would be, certainly.

Meanwhile, Bill is putting his number one suspect to the test. 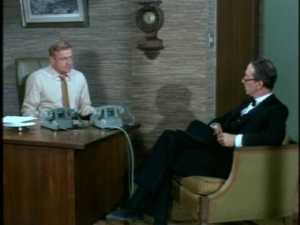 He offers Dimsdale French’s position, adding that rumors from England have persuaded him to dismiss French.

Dimsdale urges Bill to ignore rumors and turns down the job–he only like children from a distance and wants to work for an uncomplicated bachelor.

That let’s him off the hook.

At home, Jody gets the mail and lets Buffy open an unaddressed, unstamped letter. Cissy enters the room as Buffy is reading it.

When Buffy asks her what “set his cap” means, Cissy reacts with such shock that you’d think Buffy asked her to explain “throbbing member” or something.

This third letter is more detailed in its accusations. 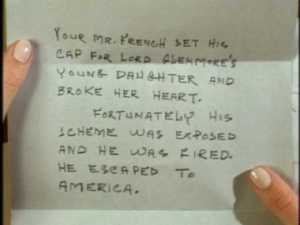 Showing the letter to French, Cissy bubbles with anger about the person spreading lies.

To her surprise, French says the message is true.

Lord Glenmore did dismiss him with cause. He was lucky that Bill hired him shortly thereafter on the basis of an interview, without checking references.

Cissy’s opinion of French takes such a nosedive that she doesn’t want him to take the twins to the park–she insists on taking them herself.

Just how young is she imagining that “Lord Glenmore’s young daughter” was? 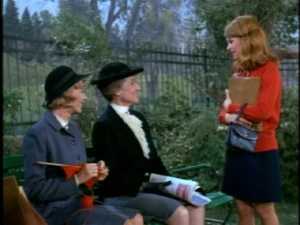 At the park, she runs into Miss Faversham and Alfred Dimdale’s sister Alice, another nanny.

When they ask where French is, Cissy says she’s going to be taking more responsibility for the children.

(As a knitter myself, I watched this scene closely to see if Heather Angel is actually knitting. She’s doing something with the needles, but it looks awkward.) 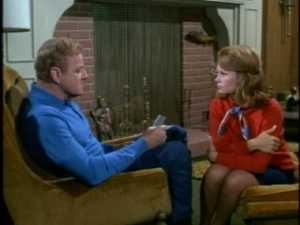 At home, Cissy pours her heart out to Bill.

“What kind of man is Mr. French?” she wonders.

Bill replies that French is intelligent and honest, and that there has to be more to the Glenmore story than it seems. 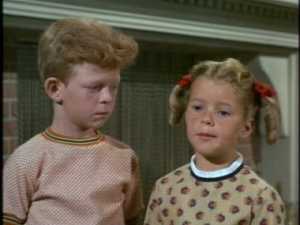 They get interrupted by the twins, who have sensed how worried French, Bill and Cissy are.

They are tired of being told that nothing is wrong.

Bill says that three people worrying is enough for one family, so they should let the older people handle it. The twins agree and secure Bill’s promise to tell them when it’s time to start worrying.

Bill goes to see French and listens as his French confirms again that the letter is true. When French offers to quit, Bill goes into mock-annoyed mode. 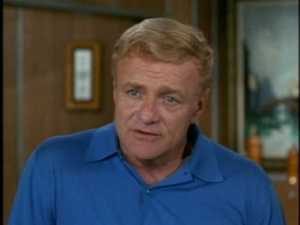 He lets French know that he still doesn’t believe the letter writer. French, who is obviously moved by him employer’s faith in him, says that is his privilege.

Bill then joins a still-brooding Cissy for another conversation. 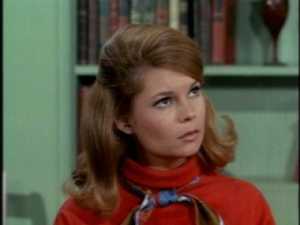 She feels like there are two Mr. Frenches. She wishes French would prove that the good one  they’ve known all along is the real one.

That’s exactly what French won’t do, Bill says:”If he has to prove himself to keep your respect, your respect isn’t worth anything to him.”

Chastened, Cissy finds French and apologizes to him.

She thanks him for being the kind of person he is–and for being “very tolerant of emotional teenage girls.”

Lord Glenmore’s shy and overprotected daughter Evelyn had hardly any contact with men. She enjoyed talking to French about books and eventually believed herself to be in love with him.

“I was younger then and my figure a bit trimmer,” he explains sheepishly.

He and Lord Glenmore were afraid that if French merely quit, Evelyn would continue to pine for him. Instead, they cooked up a story that French was a married cad scheming to extort money from his employer.

Things turned out okay for Evelyn, who is now happily married with a lovely family.

That rules her out. So who wrote the letters? 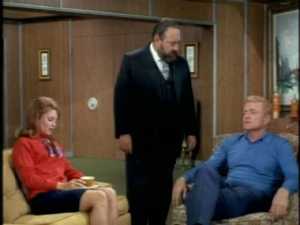 French says he’s known all along it was Alice Dimsdale.

Alice probably feels it’s her duty to protect Cissy and the children, he says.

The next day, French is back on park duty. 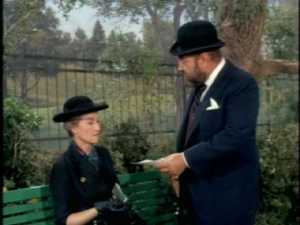 When Alice expresses surprise that he’s still taking care of the children, he returns her letters with thanks.

“They served a purpose–oh, not necessarily the one you had in mind,” he crows.

Then he joins a beaming Miss F to share what he calls “in every way, an exceptional day.”

This episode fills in a crucial hole in French’s back story–how he made his way from a British castle to a New York bachelor pad.

A mystery is always fun, although I feel confused about Alice’s motives. French’s explanation that she was protecting the children makes it sound like she doesn’t know the true story. His confrontation of her in the park, however, suggests that he ascribes malice to her actions. I suppose the details don’t matter, since this episode is really about French’s need to feel trusted by the Davis family.

I enjoy the scene where Buffy and Jody express frustration when no one will tell them what’s wrong. It’s realistic for kids to pick up on tension, and Bill handles the situation well.

There’s a slight oddity in the final park scene–Buffy, Jody and French talk about a game Jody invented called “I Know.” It seems to be a followup to an earlier conversation, one we didn’t see. 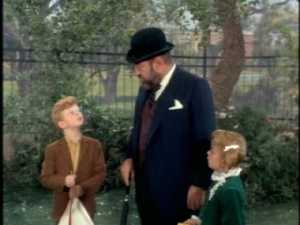 Also even by their standards, the twins are overdressed. Buffy looks like she’s going to a performance of The Nutcracker.

According to a bio of Irene Tedrow, “Her features grew more severe with age, which ultimately typed her as puritanical meddlers and no-nonsense matrons.”

She was certainly playing to type as Alice.

Before TV, she was active in radio, with a regular role on Meet Corliss Archer and frequent appearances on such shows as Suspense, Family Theater, and Crime Classics. She worked steadily in television throughout the 1980s; her more memorable appearances include playing Aunt Martha on an episode of Leave it to Beaver—and reprising the role in twice on the 1980s comeback series—and attending two of Mary’s disastrous parties as Congresswoman Margaret Geddes on The Mary Tyler Moore Show. She had a recurring role as Mrs. Elkins on Dennis the Menace. She appeared once on Sebastian Cabot’s earlier series Checkmate and crossed professional paths with Brian Keith in The Parent Trap (her role was tiny and uncredited) and Centennial.

Gary Tigerman’s screen career was short—Oggo the Caveboy on Lost in Space was probably his best role—but his life has gone in interesting directions. He served jail time for refusing to serve in Vietnam, and after his release he got involved in music and songwriting and later wrote a sci-fi novel, The Orion Project.

David Montresor didn’t have much of a screen career. His most intriguing credit is the 1960 Italian-made sci-fi film Space Man, a.k.a. Assignment Outer Space.