It’s Saturday morning, and Uncle Bill is getting ready for a golf game. Buffy and Jody are disappointed that he can’t spend time with them. He’s not about to give up his “Bill time,” though.

“It’s not often that I can get away on a Saturday,” he says.

As it happens, Bill’s plans are about to fall apart, anyway. A phone call brings bad news. 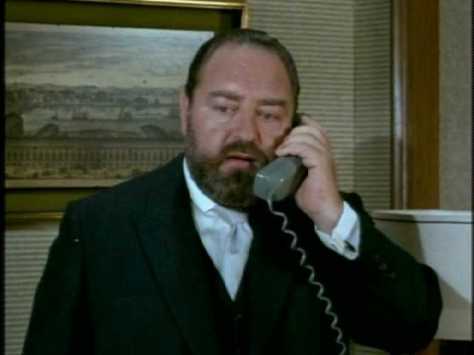 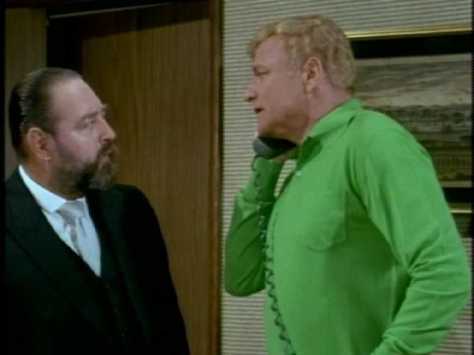 After listening for a moment, Bill tells French to tune in “the news program” on the television.

The whole family rushes into the den and gathers around the rabbit-eared set.

A bridge has collapsed in Africa–a bridge connecting the emerging nations of “Matongo” and “Nubwanda.”

(I wonder how long it took Elroy Schwartz to come up with just the right African-sounding strings of syllables for those names?)

The almost-finished bridge, the announcer tells nation, is a project of the William Davis Construction Company.

Fun facts about Matongo–the population is 8 million, and the government is democratic.

Soon, Cissy is answering calls from the wire services, and Bill is rushing to his office. 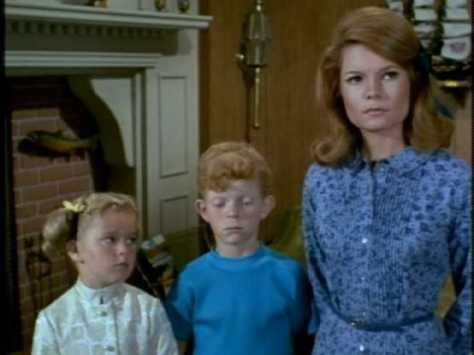 The worried kids want to know what they can do to help. Bill tells them to be good and mind Mr. French.

At the office, Bill learns that only one person was injured–Clark McAlister, who has been supervising the construction project. It’s feared that McAlister’s back may be broken. 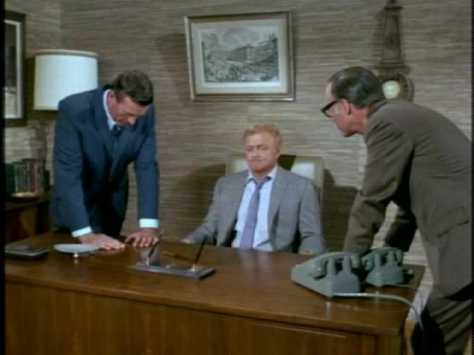 Bill shows admirable concern for his employee. He tells his underlings to charter a plane to bring McAlister back to New York and to find the injured man the best orthopedic doctor available.

Bill also learns about rumors going around that blame the collapse on the use of shoddy materials. Bill, who trusts McAlister’s integrity, decides to fly to D.C. and speak to Matongo’s ambassador in person.

As Bill is going out the door, this guy reminds him that the company is on the hook for any losses, but Bill isn’t personally responsible.

Glasses Guy will continue to advocate evading personal responsibility throughout the episode, so we can be pretty sure he’s a lawyer.

Bill tells the ambassador that his company will cooperate fully with Matongo’s investigation and will also launch an internal one.

Bill emphasizes the he doesn’t believe his employees cut corners, but he promises to cover the disaster’s full cost if the company is found liable.

The ambassador appreciates the fact that Bill came to see him in person.

(The ambassador’s office introduces a recurring color scheme in this episode–red and blue. It also conveys some subtle hints in case you forget where Matongo is located. Elephant, gazelle, zebra-skin rug…Africa!)

Back at home, Glasses Guy is the bearer of bad news. The company’s insurance won’t cover a penny of the losses if the builders used sub-standard materials.

If that happens, Bill pledges, he will cover the losses out of his personal assets. He sticks to this position even when Glasses Guy tells him it will cost him everything he has.

After Glasses Guy leaves, French and the kids return from grocery shopping.

French reprimands Jody for closing the door with his foot. C’mon, French–the kid’s hands are full! 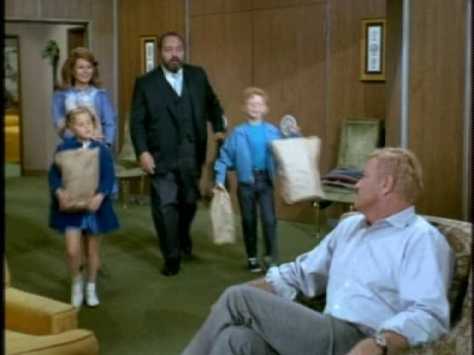 Everyone soon learns that the family faces bigger problems than improper door-closing.

Bill lets them know that they may soon lose everything they have, including their apartment.

(Dumping this on them before the investigation is even completed? Smooth move, Uncle Bill. I mean, it’s not like these kids have any ongoing issues with trauma and loss, right?)

All three kids insist that they won’t mind moving, as long as the family stays together.

Jody adds that he doesn’t need a whole room for himself. If they get a smaller apartment, he can sleep with Mr. French. This earns one of French’s patented horrified looks, which provides the best laugh in this mostly-serious episode.

The kids just want reassurance that they won’t be sent away.

Bill answers them with a hug.

(Judging by upcoming scenes, he really should have used words instead.)

Soon Bill gets word that McAlister is back in New York, so he rushes to the hospital to visit him.

McAlister says the bridge showed no signs of stress before it suddenly collapsed. The local workers are not to blame for the incident, he adds. They are they best crew he’s ever had.

Bill tells him to concentrate on getting well and informs him that he is flying a specialist in from Johns Hopkins.

After leaving the room, Bill talks briefly with McAlister’s daughter.

She tells Bill that no one blames him for her dad’s condition. Then she hints around that her dad would be relieved if he didn’t have to worry about her college costs.

(Poor Bill’s on a fast track to the fat-fat-the-water-rat side of town.)

Back at home, the kids are still worried, and French isn’t exactly reassuring.

The family faces some “quite awesome possibilities,” he says.

And he doesn’t mean it in the “Totally awesome!” sense.

The kids just want to know that they won’t be shipped back to Aunt Fran, but French says that children need a suitable, stable environment.

“If a family is a family, it doesn’t get sent away all the time,” Buffy insists.

“Quite,” is the only response a visibly moved French can get out.

The next morning, Cissy announces to the twins that she is going to get a job to help the family stay together. Jody says he will run errands to make money and suggests to Buffy that she try babysitting. After all, she likes babies–or at least dolls.

We see her walking a poodle… 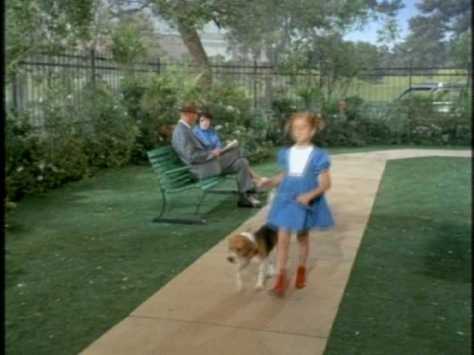 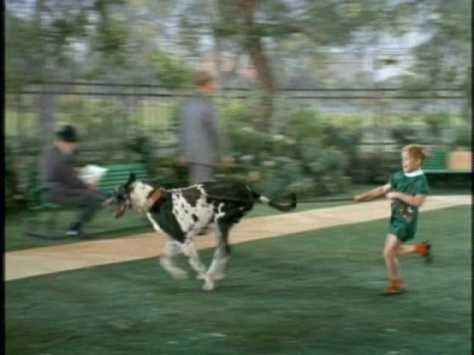 …and then we see a great dane walking her. 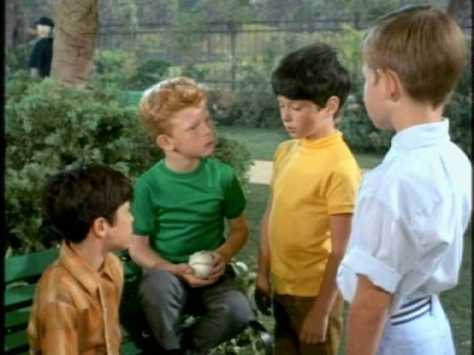 Jody takes only $2 and a $1 IOU for his baseball signed by Mickey Mantle.

Buffy gets 36 cents for a belt made from gum wrappers.

That’s probably a fair price for the belt, but Jody’s going to regret his transaction someday. (Here’s a ball from the same era that went for over $700 at auction.)

At work, Glasses Guy is still trying to get Bill to protect at least some of his personal assets.

Bill won’t hear of it. He’d rather lose everything than sacrifice his integrity. When Glasses Guy asks about the kids, Bill says they took him for better or worse.

(If only he had made his intentions to keep family together this clear when he was talking to the kids.)

At home that night, French fills Bill in about the fund-raising the children have been doing.

The kids present him with their earnings to date, which amounts to about $6.

“When a family faces troubles together, they’re not so hard,” Buffy says.

At a loss for words, Bill manages to let them know that he appreciates their efforts.

The next day, he visits McAlister at the hospital again and hears some good news. 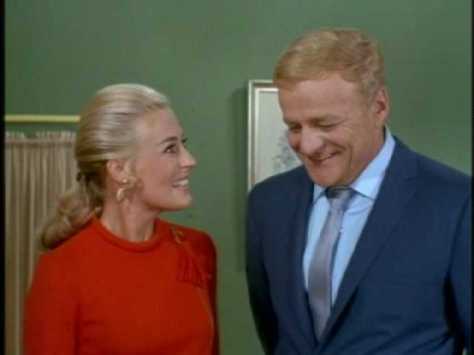 The expert from Johns Hopkins has predicted a full recovery.

While he’s at the hospital, Bill takes a call from work. The ambassador wants Bill to see him right away.

In D.C., Bill gets more good news. The collapse was not his company’s fault.

It seems that enemies of Matongo’s government sabotaged the project. But now, Matongo’s people are more determined than ever to see that bridge is completed.

Bill says they can talk about re-building soon, but first he has to take care of some family problems–including buying back a baseball and a gum-wrapper belt. 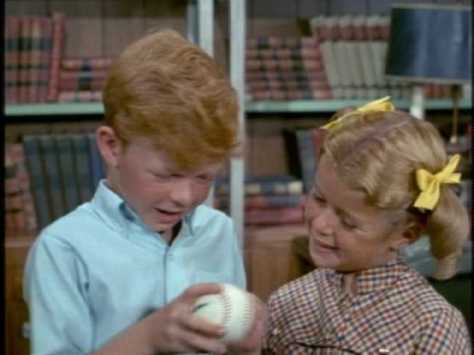 The kids are happy to get their treasures back.

And everyone is thrilled that another threat to their family unity has been averted. 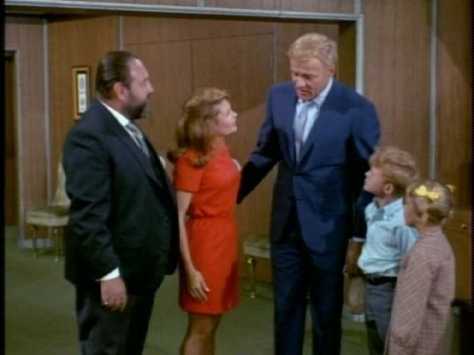 Bill says they can keep the apartment and adds that French will still be able to live with them.

“There was never any question,” French replies.

This episode is unusual, with its minimal jokes and its emphasis on business matters. I like it: Scenarios that threaten the family’s solidarity always make for compelling episodes, and Brian Keith’s non-verbal acting is excellent, especially in the final scene with the ambassador.

The show takes pains to present Bill as the most benevolent kind of capitalist imaginable–he treats his employees well, pays for their health care himself when they are injured on the job, and stakes his entire fortune on his company’s integrity.

We get references to Sharon and Aunt Fran. Jody’s signed baseball has been mentioned before, too.

Character actor McMahon made a film and TV career out of playing what his IMDb bio describes as “assorted New York characters – thugs, cabbies, henchmen, bouncers.” This episode was his last on-screen appearance; he died less than three years after it aired.

British actress Maura McGiveney was the daughter of vaudeville “quick-change artist” Owen McGiveney. Shortly after this episode aired, she appeared in the cast of one of TV’s biggest bombs—ABC’s one-episode wonder Turn-On.

Davis Roberts worked regularly as a TV character actor right up until his death in 1993.

William Boyett seemed to specialize in playing policemen and judges throughout his prolific career as a character actor. He had regular roles on Adam-12 and the 1950s cop show Highway Patrol. He also made frequent appearances on both the 1950s and 1960s versions of Dragnet. This is his first of six appearances on Family Affair.