This episode opens in an unusual setting–a boardroom.

Apparently, the guys around the table have bid on a construction project, and now they are finding out who gets it. 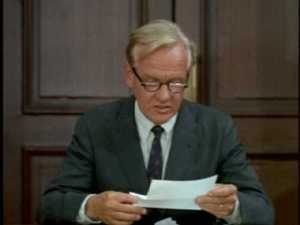 Except Henry & Associates bid $13,218,000. We learn that this is the third time in a row that Henry has underbid Bill by a very small amount. 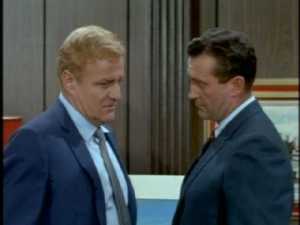 An associate suggests to Bill that Henry might be bugging the Davis offices.

Bill has known Henry for 15 years and doesn’t want to believe he would do such a thing. Always a good sport, he heads over to congratulate Henry on getting the contract.

Meanwhile, at home, the twins are playing with their friend Norman and his new toy. 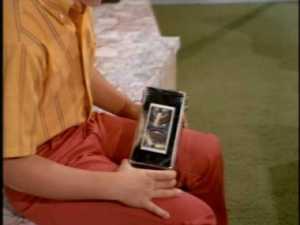 A tape recorder. Hmm…I think I might see a theme developing here.

Norman plays back a recording of Jody talking.

Buffy wants to try singing on tape, but she can’t think of a song.

The ever-patriotic Jody doesn’t have that problem.

Buffy overcomes her mike fright to do a pig imitation on tape, and then Jody does a bunny imitation. 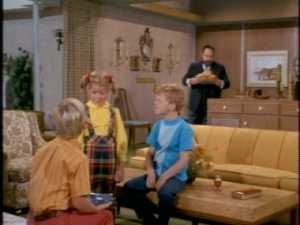 He’s apparently forgotten that audio tape is not a visual medium. Oh, Jody.

The entry of French into the room gives the kids a better idea: They want to get him on tape. As Buffy says, “He has a beautiful voice…just like in a commercial.”

(I’m not sure if that’s an in-joke, but Sebastian Cabot did do some commercials.) 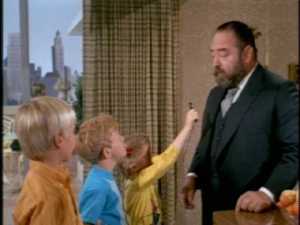 “Would you like to say a few words for our radio audience?” Buffy asks, and Jody helpfully explains that French’s voice would go in the microphone and get recorded on tape.

“Jody, I understand the principles of electromagnetic recording,” French replies.

Buffy suggests that they record him reading Winnie the Pooh, so they can listen to it at bedtime if French isn’t around. 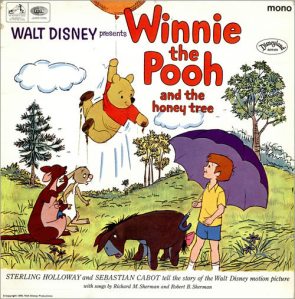 Now, THAT I’m pretty sure is an in-joke.

French reminds them that a tape recorder can’t tuck in a blanket or fluff up a pillow.

That’s his way of saying, “Ain’t nobody got time for that.”

Fortunately for the kids, another victim soon breezes into the room.

Answering a phone call from Sharon, Cissy informs her friend that she has big news…so big and private that she needs to take the call in her bedroom.

After Buffy hangs up the extension, Norman has a brainstorm.

He thinks they should sneak the recorder into Cissy’s room and capture her conversation.

Buffy and Jody know Cissy wouldn’t like the idea, but they don’t need much convincing to go along with it.

Entering the room under the presence of retrieving Mrs. Beasley, Buffy plants the recorder.

(The image above is so classically “teenage girl”–her posture, the pink phone. I like Cissy’s side-ponytails better than the side-bow look she’s been sporting frequently this season.)

While Buffy’s there, Cissy peppers a mystified Sharon with questions about a math problem, but once Buffy leaves we get the real scoop.

It involves a boy named Roger Lund and Cissy’s attempts to attract his attention. She’d tried getting her sweater caught in his notebook (?) and even wearing “sexy stockings” (!), but nothing worked–until today. Her winning move? Dropping her tuna salad in his lap.

(It’s a good thing for the whole family that Cissy is so wholesome. Imagine the eye-opening secrets a real teenager might have been keeping in 1969.)

That night at dinner, Bill asks Buffy and Jody how their day was, and they tell him they’ve been playing a “secret game.”

Bill says that if it’s secret, they can’t tell him about it. As a parent, I think I would pry into their “secret game,” but Bill is clearly distracted. 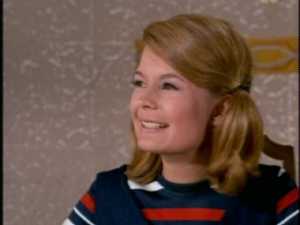 When Bill asks Cissy about her day, she gushes that it was “practically perfect.”

The twins agree that it was and start filling him in on all the deets–the new boyfriend named Roger, the tuna salad caper, and all. 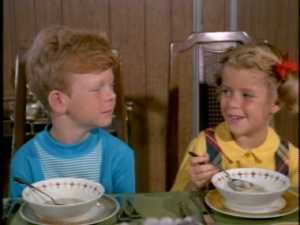 They sure are sly about their secret game, aren’t they?

Cissy’s annoyed, but she can’t pin down exactly what they did. They have French as a witness that they didn’t listen outside Cissy’s door or eavesdrop on the phone extension.

Cissy’s still pissed, and I don’t blame her.

The next day, Norman and his tape recorder make another appearance.

Norman suggests that they spy on French this time.

The twins are game. As Buffy says, “It’s fun hearing what you’re not supposed to hear.” 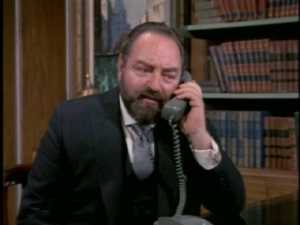 Unfortunately for French, they catch him in the middle of a delicate conversation.

He’s telling someone about a matter that is “not easily described without embarrassment.”

When Bill comes home a bit later, he hears French’s voice and calls to him.

He’s actually hearing French’s voice on tape, and both he and French head toward the sound’s source.

The kids are playing back the recording they made–a recording of French attempting to order a “beard snood.”

For an agonizingly long time, we listen as he describes his problem–waking up with his beard in “classic disarray.” He’s looking for something like a woman’s hairnet to keep his “hirsute adornments” in order.

…but he also seems to be enjoying this a little.

(The interplay of facial expressions between Keith and Cabot is wonderful.)

When Bill finally enters the room, he makes his feelings known.

Bill uses the old I’m-not-mad-I’m-disappointed-in-you line, and points out that they have invaded Mr. French’s privacy.

“Privacy,” Jody corrects him, pronouncing it with a short “i,” as French would.

(A cumbersome joke to explain in writing, but amusing on the screen.)

Buffy and Jody are properly abashed, but Norman is unrepentant.

He tapes his parents all the time, and they think it’s funny. “You people just can’t take a joke,” he says.

The next day, we find ourselves in Bill’s office. He has reluctantly brought in an expert to look for bugs, though he still doesn’t believe he’s being recorded.

Harris, the expert, calls this his “radio frequency indicator, although it appears to be a train case, with it’s lid removed and mounted on a stick.

As Harris walks around the office, “detecting,” the train case lid rotates.

Props to you, prop guy!

Pretty soon, Harris hits on something.

The bug is hidden in a desk drawer’s handle. 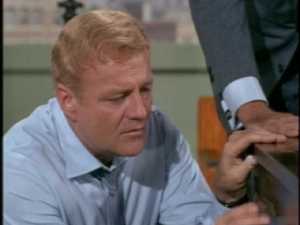 Before they remove it, Bill sends his nemesis a message.

Saying that he must not be much of an engineering if he has to resort to such a tactic, Bill expresses pity for Henry.

He delivers that line in his usual laconic style, but he shows some fire when he rips the handle off his drawer.

That recording device is out of commission, but Norman’s is still active. 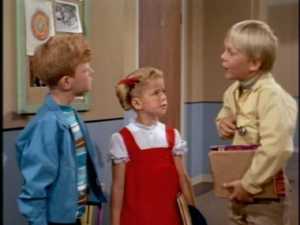 At school, he tries to interest Buffy and Jody in playing with it again, but they say they’re not allowed.

Norman accuses Bill of having no sense of humor, and he still denies that bugging is wrong.

“I say it’s okay with anyone as long as they don’t catch you,” Norman says, quoting his father. 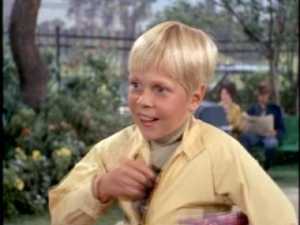 After school, in the park, Norman sees another chance to use his favorite toy.

The victims this time are Cissy and that dreamy Roger Lund.

They have a mushy conversation, and Norman gets it all on tape.

When Norman comes over later, Buffy and Jody reiterate that they can’t play spy with him anymore.

Norman says he just wants to play a recording for them, and they figure that would be okay.

Soon, Cissy arrives home and hears her own voice emanating from the bedroom. 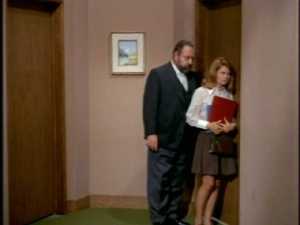 …and then a rare triple busting.

We hear some embarrassing sweet talk. When the subject turns to kissing, Bill finally prepares to intervene.

Before he busts in, Buffy and Jody start reprimanding Norman themselves.

(Thank goodness–that spares us a tedious sitcom misunderstanding, in which Buffy and Jody get punished for something they didn’t do.)

Bill, Cissy, and French continue to listen as Norman calls the twins “goody-goods” and again denies that bugging is wrong.

(That does sound rather goody-goodish.)

Norman rushes out, past his hallway audience, and calls back, “How come it’s all right for you to listen to us?”

That’s a pretty good deflection in the heat of the moment, but Norman is still a sassy brat.

Back in Bill’s office, Harris returns to try to sell Bill some spy equipment of his own.

He claims this thing can pick up a conversation half a mile away.

I have a feeling Harris got his training working for CONTROL. He should just install a cone of silence over Bill’s desk for sensitive conversations. 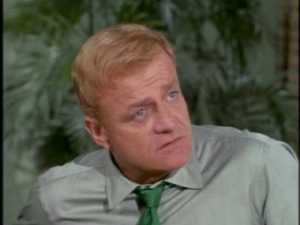 Harris says everyone is spying, but Bill refuses to join in.

If spying is the price of success, he’d rather quit and return to working as a first-class welder.

That evening, Bill is still brooding about the encounter and whether he made the right decision.

It’s so obvious he did make the right decision that I can only assume he is fishing for head-pats from French. French, of course, obliges: “Integrity, sir, is never out of date.”

To Bill’s chagrin, Norman drops by again, tape-recorder in tow. 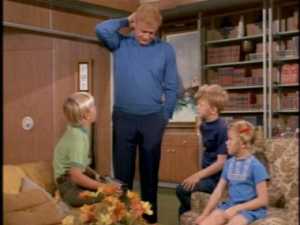 “Enough of that,” Bill says, but Norman says he goes by his father’s rules.

Bill says that in the Davis home, the kids have to follow his rules.

Norman still tries to convince Bill that bugging is harmless and fun. He made a tape of his parents talking before he left his apartment, and he insists on playing it for everyone.

It starts out with his dad saying, “Norman’s not really such a bad kid,” and goes downhill from there. When the possibility of consulting a psychologist comes up, Bill tries to cut off the tape, but Norman prevents him.

He listens as his parents decide how to break the news of their impending divorce to him.

Norman rushes off, leaving his tape recorder behind.

At bedtime that night, the kids are still feeling sorry for Norman.

The twins ask Bill how he knew that Norman would get hurt. Bill says he didn’t know, but when people do things that are wrong, someone often gets hurt.

After Bill and Jody leave the room, a comic exchange between Buffy and Cissy lightens the mood. 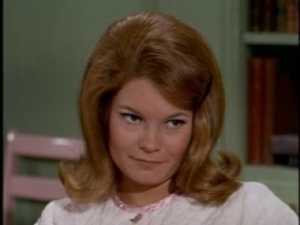 Buffy asks a bemused Cissy if she really dropped her tuna salad on Roger.

(Norman, meanwhile, went on to have a rich and fulfilling career with the NSA.)

Electronic espionage was a hot-button topic in the 1960s (as it is today), but people wouldn’t know the full extent of domestic spying for a few years. The FBI’s awful COINTELPRO program came to light in 1971, and President Nixon’s White House taping system became public knowledge in 1973. (Norman’s father and Nixon were kindred spirits–Norman says his dad records every conversation in his office with the consent of the other parties.)

Wonderful Frenchisms (“hirsute adornments!”) and the train-case technology are highlights of this episode. The ending is heavy-handed, but Norman is such a jerk that his comeuppance  is satisfying.

Why did Bill even let Harris in the door for his spy-gear pitch? And why doesn’t anyone mention that bugging is illegal? 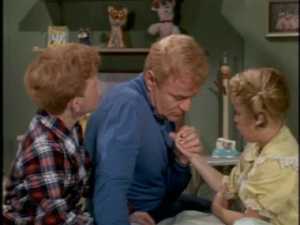 Bill’s bedtime sweetness for this week–a kiss on Buffy’s hand.

“You’ve just stumbled into a whole nest of squares.”–Bill

Bobby Riha had a regular role in the short-lived Debbie Reynolds Show.

Richard O’Brien’s character acting included many police officer roles, including a recurring one on S.W.A.T.