This is the first Family Affair episode whose original air date falls after my birth. I don’t think I was watching much TV my first few days, though.

We open in a nightclub, where a red-haired woman is singing.

Or at least lip-syncing awkwardly to what may or may not be her own voice.

Hey, it’s that lady who was on Match Game sometimes–presumably when Fannie Flagg wasn’t available. 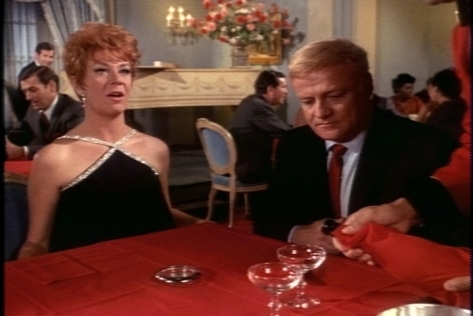 Here, her name is Julie Madden, and it seems she’s one of Bill’s squeezes. When she finishes her set and joins him, they reminisce about the times they’ve shared in London, Paris, Madrid, and Acapulco.

Unlike some of Bill’s girlfriends, she shows an interest in his kids. She wants to know if Jody still likes finger-painting and Buffy still has the “funny-looking doll with the glasses.” (Bill, who has strangely specific ideas of age-appropriateness, says boys give up finger-painting around age 6, and Buffy will probably give up Mrs. Beasley at age 10.) He encourages Julie to come and visit the kids soon.

The next morning at breakfast, Bill gives Cissy an autographed copy of Julie’s latest album. 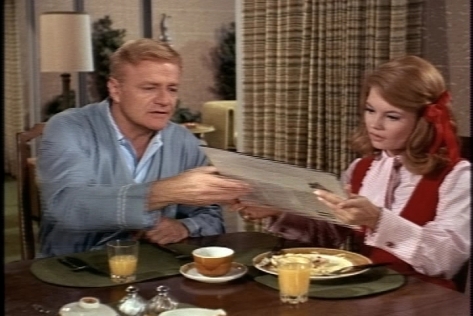 Cissy, who has entered her unfortunate side-bow period, observes with a trace of snarkiness that Julie has been making a comeback lately. Bill responds that he didn’t know she ever left.

Here’s the album, in all its “living stereo” glory.

Buffy is taken with the idea of being a recording artist and asks Bill if he would be proud of her if she was a famous singer. Unwisely, he says yes. (With “I’m always proud of you” he might have saved himself some trouble.) 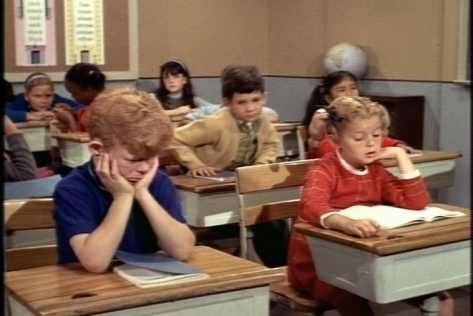 That day in school, Buffy is so excited about music class that she’s singing under her breath before the music teacher even arrives.

When the teacher does show up (for what she calls the children’s first music lesson–don’t you think they would have been having music class throughout the school year?), she announces that she’s forming a girls’ glee club. 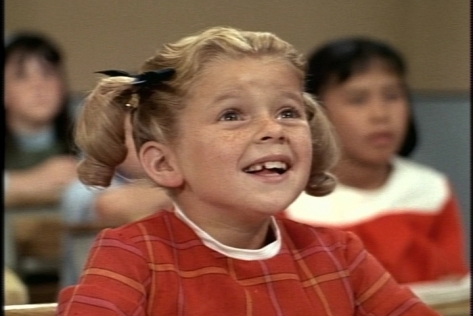 Buffy can’t wait to show off her skills.

Unfortunately, when the class starts singing “My Bonnie Lies Over the Ocean,” we find out that Buffy has no skills.

Miss Cummings’ face says it all.

In fact, she finds Buffy’s singing so offensive that she asks Buffy to step out into the hall with her for a moment. That’s never good.

Miss Cummings explains that Buffy’s singing is off-key, and that when one person sings off-key, the “harmony of the composition is destroyed.” She suggests that Buffy just move her lips while everyone else is singing.

A miserable Buffy gets through music class and, surprisingly, still tries out for the girls’ glee club after school. She’s unsuccessful, of course.

She asks French if he thinks Julie Madden used to “mix everyone up” with her singing when she first got started.

Tucking Buffy in that night, Bill notices how sad she is.

When he asks her to smile, this is the best she can do.

When she asks Bill if he still likes her, even though she didn’t make the glee club, he has a cute response: “Yeah. I even sort of love you.”

He tries to get her to shake off her defeat, but when she can’t, he promises to try to get her into the glee club. (That’s his second mistake in this episode.) 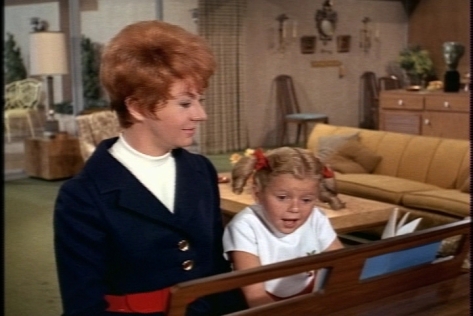 He arranges for Julie to teach her, but Buffy doesn’t improve with teaching.

It’s amusing to watch Anissa Jones try to sing as badly as possible.

When Bill comes home, Julie tells him that Buffy is a hopeless case.

It’s up to Bill to break the news to Buffy.

After he explains that everyone has different talents, and that lots of people can’t sing, Buffy seems to accept her limitations.

Well, that wrapped up quickly. What do we do with the 12 minutes we have left?

Actually, Buffy is still a bit upset, as we see at school the next day when she mopes on the playground.

Jody, in supportive brother mode, tries to comfort her.

He tells her that he can sing, and since she’s his twin, she should be able to sing, too.

When he demonstrates his singing, it attracts the music teacher’s attention. She seems strangely excited about singing that is passable at best.

She wants Jody to sing a solo at Parents’ Night. This not only adds salt to Buffy’s wounds but upsets Jody, as well. He doesn’t want to be a “sissy” and sing with the glee club girls.

With Buffy willing but unable to sing and Jody able but unwilling, Bill finds himself at a loss.

Bill tells Jody he doesn’t have to sing, but Bill would be proud of him if he did. As needy as these kids always are for approval, it’s no surprise that Jody gives in. He doesn’t really seem to mind much, since he’s grinning by the end of the scene. 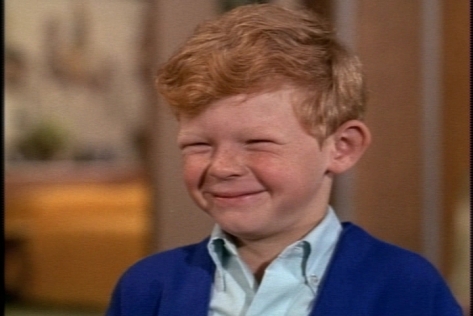 At least I think this is a grin.

Buffy is feeling better, too. The music teacher has given her a role in the Parents’ Night concert–as page-turner at the piano. 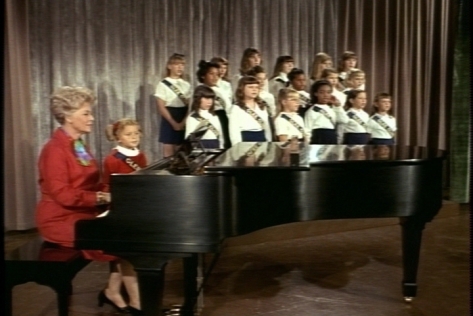 The night of the show, after the be-sashed glee club performs, Buffy introduces Jody for his solo.

He screeches out a tune called “Every Little Boy Can Be President.”

If you asked a little kid to come up with a song about U.S. presidents on the spur of the moment, it might resemble this annoying ditty. George Washington…Thomas Jefferson….Abe-Abe-Abraham Lincoln…cherry tree…log cabin. It ends with several shrill repeats of the question “Why not me?” I was asking “Why me?” by the end.

(It would be fun to think that seven-year-old Barack Obama saw this episode when it originally aired. Unfortunately, he was living in Indonesia at the time.)

I like the way Brian Keith looks proud but slightly bemused by Jody’s performance.

The episode ends with Buffy asking whether anyone ever made the cover of a record album by turning music pages.

This episode feels choppy, with everyone’s problems resolving more quickly and easily than they should. I suppose it was just an excuse for Johnny Whitaker to sing that dreadful song, which was released as a single.

We’ve heard Buffy sing before. It wasn’t great, but it wasn’t nearly as bad as her efforts in this episode.

When I was a kid, I would see people like Kaye Stevens on game shows and wonder what they were famous for. Well, according to her 2011 obituary, Kaye Stevens “performed a solo cabaret act at some of the most celebrated clubs and showrooms in the nation, including Caesar’s Palace in Las Vegas and the Plaza Hotel’s Persian Room in New York City.” She often performed with the Rat Pack, and she helped Bob Hope entertain the troops in Vietnam. She also had a five-year stint on Days of Our Lives in the 1970s. Later in life, she was active in Christian ministries.

Irene Hervey in her heyday.

Irene Hervey was the mother of another nightclub singer, Jack Jones. Hervey appeared in feature films such as Destry Rides Again in the 1930s, then transitioned into B movies and television. She had a recurring role as Aunt Meg on Honey West. A year after this episode aired, she received an Emmy nomination for a guest appearance on My Three Sons.

I’m really sorry that Johnny Whitaker’s song from this episode isn’t on Youtube. If you really want to hear him sing, though, there’s always this.