Written by: Austin and Irma Kalish. Directed by: Charles Barton.

When we look on in on the Davis family this week, we find that the kids have just returned from school. The girls soon head back out to visit a neighbor, but Jody stays to talk to Uncle Bill about his grades. It seems he got an A in penmanship but missed four words on his spelling test. Bill tells him to spend more time studying his spelling. 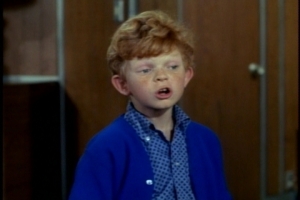 Jody has a better idea–he’s trying to do worse in penmanship. That way, the teacher can’t tell that his words are misspelled.

Meanwhile, French is concerned because the girls are spending so much time with their upstairs neighbor, Miss London. Bill only knows that she’s an unmarried older women with no children, and he assumes that the girls are helping her with household chores. Kids, Uncle Bill notes, will do housework for other people that they wouldn’t do at home even if they go paid.

Jody, who seems sharper than usual this week, asks how much Uncle Bill is willing to pay.

For that, he earns a hug and playful spanking.

And that’s about all we see of Jody this week because it’s time venture upstairs with the girls and meet the new neighbor:

Joan Blondell! Another one of those “I can’t believe she was on Family Affair” guest stars.

In Davis-land, she is Laura London, a Broadway star, and the girls are enchanted by her show business stories–like the time she played Portia in a musical version The Merchant of Venice. (Portia’s “quality of mercy” monologue became a conga number!) 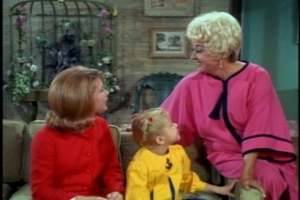 When she tells them that, as an actress, she has to watch her figure, Buffy proudly proclaims that she will watch her own figure, as soon as she gets one.

Soon the girls have transformed their living space into what French calls an “off-Broadway bedroom.”

They’ve even turned their puketastic bedspreads into a proscenium arch.

French is not amused, especially when Buffy demands an actress-style dinner–carrots and cottage cheese.

The next day, when he goes upstairs to fetch the girls, he gets a chance to meet Miss London, along with her maid, Ruby. It’s good news/bad news on the diversity front this week. The good news: We finally have an African-American character with a name who gets to utter several lines.

The bad news: She’s a “sassy” maid who says things like, “Come on in, who’s ever you are!”

The three have a funny exchange about whether French resembles one of Laura’s former husbands, Stonewall.

French returns to the Davis apartment filled with disdain for Laura, whom he considers course, loud, and uncultured. But when Bill hears that Miss London is Laura London, he admits to being a fan.

He recalls paying a week’s salary to see her on Broadway and re-enacts a quick, cute version of her Portia conga.

Bill doesn’t think French has anything to worry about, but he agrees to talk to Laura himself. 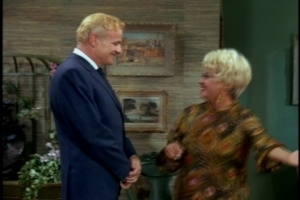 During their meeting, Brian Keith gives off Bill a convincing fan-boy vibe. I would guess that Keith liked Blondell because you can usually tell when doesn’t like guest stars.

Meanwhile, the girls are starting to lose their minds. Laura has praised their talent and encouraged them to pursue stage careers as a “sister act.” 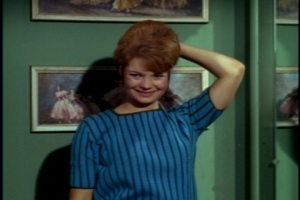 Cissy is experimenting with up-dos. (That’s actually a good call, I think.)

And Buffy is practicing her autograph, although she can only print it. She’s also thinking about changing her name.

The girls start neglecting their schoolwork and their friends, and French gets a call from Buffy’s teacher about the song Buffy performed during show and tell. It seems that one more chorus of the bawdy lyrics would have caused authorities to raid the school.

If you took a drink every time French rolled his eyes or Bill rubbed his head during this episode, you might not survive for next week’s Family Affair Friday.

Buffy thinks her teacher is just a square who couldn’t tell a “backdrop” from a “second banana.”

Soon the problem escalates to the point that Cissy wants to quit school and pursue stardom full-time. Between head-rubs, Bill agrees to watch Buffy and Cissy perform.

In Laura’s apartment, the Davis Sisters (Vicky and Venetia) perform “Let Me Entertain You” from Gypsy.

Mere pictures alone can’t really do justice to this scene. 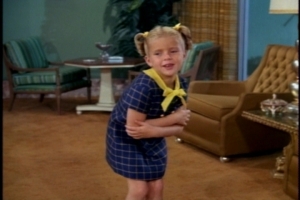 Buffy includes some choreography that is almost Toddlers and Tiaras-esque.

Bill decides to take Laura out to dinner to discuss the situation. 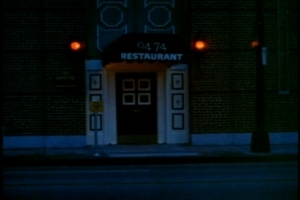 They go to his favorite night spot, natch.

Bill expresses his worry about the girls’ desire to quit school. Laura doesn’t see what the big deal is–she dropped out. 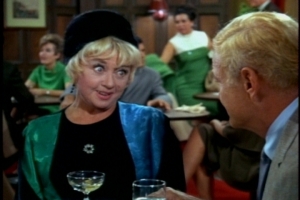 Eventually, he gets her to understand that taking the girls “out of their little world” would be detrimental.

With the girls the next day, Laura lays it on thick about the downside of stardom.

She talks about working so hard from a young age that she had “never been a kid–no laughs, no fun.”

It’s hard to watch that scene now without wondering if that’s how Anissa Jones felt about her childhood. 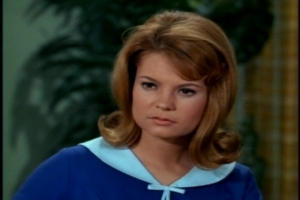 Laura’s sudden attitude change puzzles Cissy, and it causes the girls to do some reflecting.

Later, they talk to Uncle Bill. Cissy and Buffy still plan a stage career–but they will wait until after they finish school.

Hey, Jody’s back! And probably wondering what the hell everyone’s talking about.

Bill is so relieved to have this nightmare end that he offers to take the kids out to a movie. When French reminds him that it’s a school night, he rescinds the offer, causing Buffy to utter the line that must appear in every theater-themed classic TV episode: “That’s show biz!”

Then the kids leave the room in the most natural and normal way possible.

Hats off to the set decorators–every apartment in the Davis building is ugly in its own unique way.

Laura London: Joan Blondell. Ruby: Ernestine Wade. Blondell had a long career in films, mainly in “wisecracking friend of the leading lady” roles in light musicals. Some highlights from her career in the 1930s include Golddiggers of 1933, Footlight Parade and The Crowd Roars. She was once married to Dick Powell. Later, she had more serious roles in such films as Cry Havoc (fellow Family Affair alum Ann Sothern also starred) and the wonderful A Tree Grows in Brooklyn. She had regular roles in the TV series Here Come the Brides and Banyon and played Vi in 1978’s Grease.

Gypsy–my favorite musical–struck a chord with TV producers. Here are other examples of what happens when Sondheim meets sitcom.