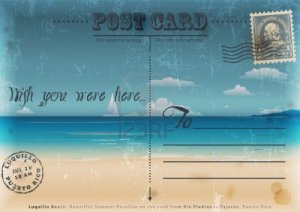 It’s summertime and school’s out, but you can still learn some valuable lessons from these summer-themed old-time radio shows.


“Randy’s a blooming idiot.”
Lesson Learned: What to do when he’s not that into you? Have you tried staging a mock wedding that turns out to be real? Apparently, it works wonders.
About Love Story: This short-lived series drew its stories from the pages of Love Story Magazine, a weekly romance pulp with an interesting history.
My Verdict: This makes for an amusing 15 minutes, though not for the reasons its creators intended.

“This blasted heat’s getting on my nerves.”
Lesson Learned: Make sure your husband has actually committed murder before you start trying to obstruct justice for him.
My Verdict: The acting is stagy, but this is a well-constructed mystery, with appropriate red herrings.

“All fat men aren’t good natured.”
Lesson Learned: Talking to yourself a lot? There is something odd about that.
Notable Performers: Henry Fonda’s naturally calm persona makes a nice contrast with the role he is playing, that of a man slowly cracking up.
My Verdict: I didn’t see the ending twist coming.

“What is it they say about summer romances?”
Lesson Learned: Summer loves grow cold in the fall. Sniff. (Alternate lesson: Advertising guys are kind of jerks.)
About Studio One: Fletcher Markle directed this short-lived anthology series that dramatized novels and plays.
Notable Performers: Burgess Meredith plays Clem, an ad man whose vacation romance with a young woman from a different social class is recounted from three perspectives—his friend’s, the woman’s, and his own.
My Verdict: This script by Markle was first produced on Columbia Workshop in 1946, then made the rounds of other anthology shows. Its popularity was well deserved; this is an understated, authentically human story with no corny elements.
Bonus Feature: This script was also produced for TV, in a 1953 production starring Dorothy McGuire.

“I sure didn’t expect to get undressed on a picnic.”
Lesson Learned: Don’t go on a picnic with Archie and Jughead. Just don’t.
My Verdict: A mildly amusing episode of this silly series. Are there ants at this picnic? Yep…plus cows, skunks, and snapping turtles.
Celebrity Name-Droppings: Jughead mentions Elsie the Cow, symbol of Borden Dairy since 1936.

Till Death Do Us Part