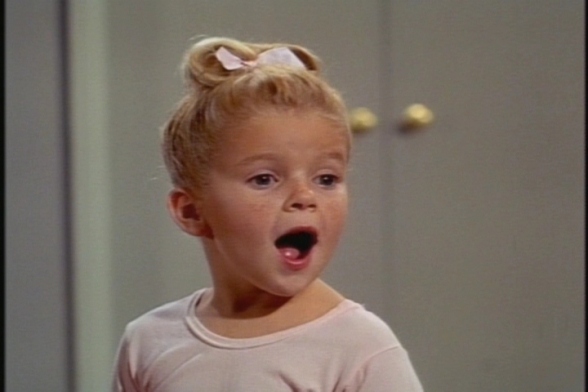 Today’s episode gives us lots of Buffy cuteness and a look at a very lucky lady–Brian Keith’s real-life wife. 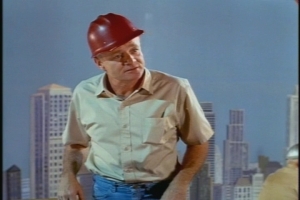 An underling conveys a message to him: His niece has torn her tutu. The worker thinks this means she suffered an injury–I wonder what body part he thinks a tutu is.

Now we know we’re in for a ballet-themed episode, so it’s no surprise that our next scene opens in typical ballet studio, complete with Russianish instructor. 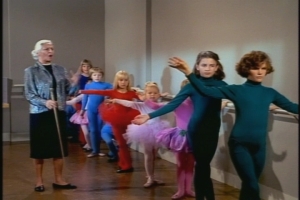 Pretty big range of sizes represented in this class.

After class, the instructor talks about an upcoming Little Red Riding Hood recital. 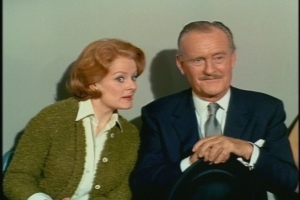 French is sitting with the ballet moms, one of whom confides that she expects her daughter Melissa to get the lead role.

(Melissa’s family lives in the Davis building–we’ve seen them before in Episode 7.)

The ballet teacher introduces a famous ballerina, Margo Dunbar, who will direct the recital and who has cast the roles. 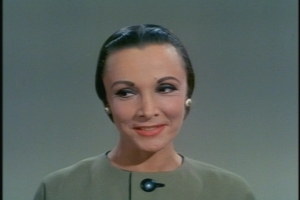 Margo is played by Judith Landon, Brian Keith’s wife. They married in 1954 and would divorce in 1969. I’m sure she had a lot going for her, despite whatever is going on with her eyebrows here.

She cast Buffy as Little Red Riding Hood and Melissa as the wolf. 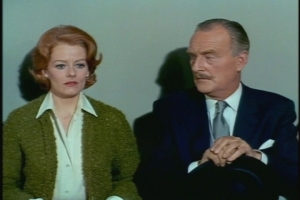 French talks to Miss Dunbar after class, and she discovers that Buffy’s Uncle Bill is the same Bill Davis she once dated in Venice (he tipped over the gondola they were riding in, which somehow kept her from performing Swan Lake that night). 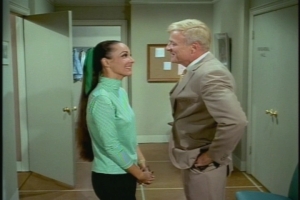 Uncle Bill must have enjoyed that Venice escapade. When he hears Margo’s in town he take the bold step of accompanying Buffy to ballet class himself the next day.

They are quickly on “honey” and “dear” terms, a situation not lost on Melissa’s mother. 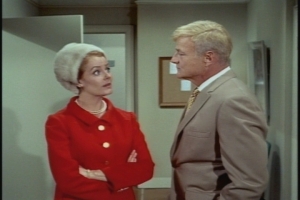 She jumps to the conclusion that the casting was rigged, of course. (Ironically, Buffy didn’t even want to play Little Riding Hood. She wanted to play the wolf.)

Margo visits the Davis home and tells Buffy how much potential she has as a dancer. 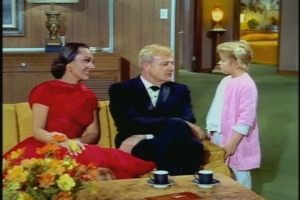 Bill and Margo tell Buffy she might become a ballet star, touring the world.

Buffy assumes they mean that she’ll have to start touring right away, which triggers her well-founded separation anxiety. Commiserating with Jody, she suddenly realizes the answer to her dilemma. 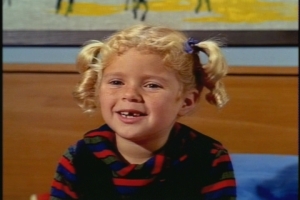 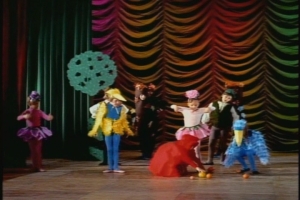 She starts by spilling her basket of goodies across the stage.

And after many other mishaps… 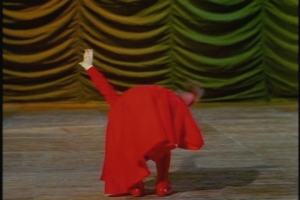 …she closes with a backwards bow.

Here are the Davis family reactions: 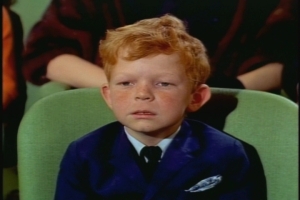 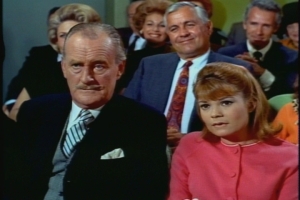 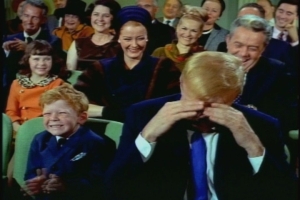 At home, the family commiserates, while an exultant Buffy confides in Mrs. Beasley. 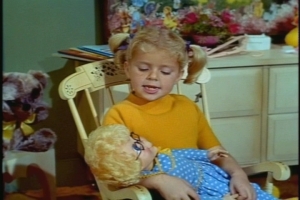 “Some of the kids said I was awful, and some said I was clumsy, and Melissa tried to bite me with her wolf teeth. It was perfect!”

It’s time for a sweet one-on-one talk with Uncle Bill, who assures her that she is home to stay. (After last week, you can’t blame her for needing reassurance.)

This is a cute episode. Buffy’s separation anxiety makes sense, and her bad ballet performance is fun. 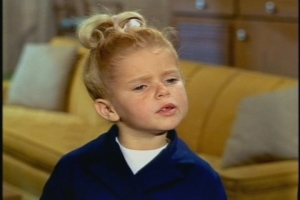 Another plus: A chance to see Anissa Jones in something other than her signature hair style. 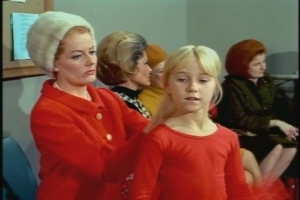 While Melissa’s parents haven’t changed since Episode 7, she has morphed from Pamelyn Ferdin to Cindy Eilbacher.

Cindy Eilbacher was a fairly prolific child and young adult actress. She was the daughter in My Mother the Car (Randy Whipple, who played her brother in that series, is a Family Affair standby) and appeared in many TV movies. She played April, Paul Williams’ first wife, on The Young and the Restless in the early 1980s and again in the early 1990s. Her sister, Lisa Eilbacher, was also an actress.

French says he enrolled Buffy in ballet as part of an “anti-clomping about the house campaign.” But Buffy began ballet in Episode 9, before Nigel French’s arrival. 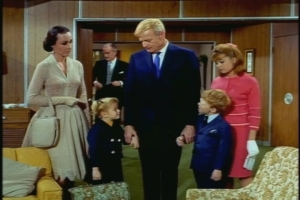 Uncle Bill: “Can you name me one other uncle who’s got a Little Red Riding Hood who always falls down?”