Welcome to another installment of Family Affair Friday! This week’s episode may not have the best script, but it does have an amazing guest star.

Nigel French hires a maid to help with a dinner party.

Hmm. That actress playing Adele the maid looks familiar. And those towels and that spice rack look so perfectly ’60s.

He quickly discovers that she’s inept and tries to fire her, but she plays on his sympathy. He ends up covering for her mistakes–and he does it so effectively that a party guest who lives in building hires her. 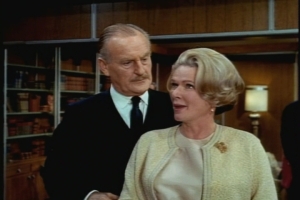 This is the party guest in question. The party scenes give us an unusual angle on the Davis apartment, which is actually a pretty complex set.

French is subsequently called upon to rescue Adele from many disasters, from dog-devoured dinners to overflowing washing machines.

That casserole dish is another cute ’60s piece. And Adele still looks familiar. Maybe she was one of those actresses who showed up on Dragnet repeatedly?

Meanwhile…doesn’t this show have some cute kids in it? 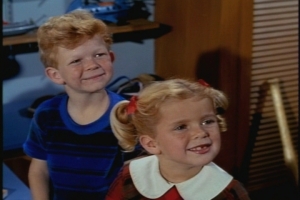 Oh, yeah, here they are. Let me take a moment to praise Johnny Whitaker–he has such a sweet and guileless quality, especially in these early episodes.

Buffy and Jody are having some trouble building a model dam for school. Uncle Bill offers to help. His idea of helping, unfortunately, is doing the whole project by himself at work. (Actually, he admits to letting his co-workers do most of it.) 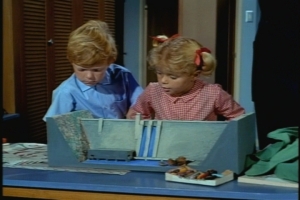 The teacher objects, of course.

French’s efforts to help Adele are similarly fruitless. Eventually, her employers discover her ineptitude. After they fire her, she tells off French, who regrets getting involved in the first place. 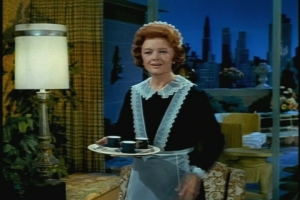 Now she’s gone and I still don’t know why she’s so familiar. Maybe I’ve seen her on Bewitched. I know I’ve seen a similar plot on that show.

Together, Uncle Bill and French decide the family motto should be “Don’t get involved.” (French wants to engrave it on his wall!)

Just then, Cissy enters the room and makes a spontaneous speech thanking Uncle Bill for his involvement, and bemoaning the lack of involvement the kids faced in Terre Haute.

Her speech works, though. (It also provides a bit of foreshadowing for next week’s episode.) Uncle Bill is so moved he decides to stay home for the evening!

Now let’s watch the credits to see who played Adele.

Oh my God! That was Myrna freaking Loy?!

Commentary: The first time I watched this episode as an adult, I really did spend the whole episode wondering how I knew the actress playing Adele. A familiar-looking guest star is a common thing on Family Affair. Usually, it just means that the actor in question made a bazillion ’60s TV guest appearances and played bit parts in dozens of movies.

Sadly, both the Adele role and the script are a waste of Loy’s talents. (Her performance is actually pretty flat, too–I think that’s one reason I didn’t immediately recognize her.) Every potentially interesting scene–from Adele’s flubs to the teacher’s reaction to the Davis dam–happens off camera. If they’d included those scenes, maybe I wouldn’t have spent all my time looking for interesting bits of set decoration.

Cute oven mitts. I think they match the dish towels.

Adele: Myrna Loy. Sheila: June Vincent. Ken: Carleton Young. What to say about the beautiful Myrna Loy? She started in movies in 1925 and played exotic sirens during the silent era. In the 1930s she began playing the sophisticated comedy roles that made her famous. She is best known as Nora Charles in the Thin Man series of films. In the 1940s she starred in the charming comedies The Bachelor and the Bobby-Soxer and Mr. Blandings Builds His Dream House and in the excellent World War II aftermath drama The Best Years of Our Lives. She continued working through the 1980s, mostly in TV movies, but Family Affair was one of few TV series appearances she ever made. Loy died in 1993.

One episode highlight–the cute exit Uncle Bill, Jody and Buffy make from Uncle Bill’s room. I wonder whose idea it was. Director William D. Russell was not usually given to such whimsy.

Adele: “I’ve learned my lesson–never listen to a man.”