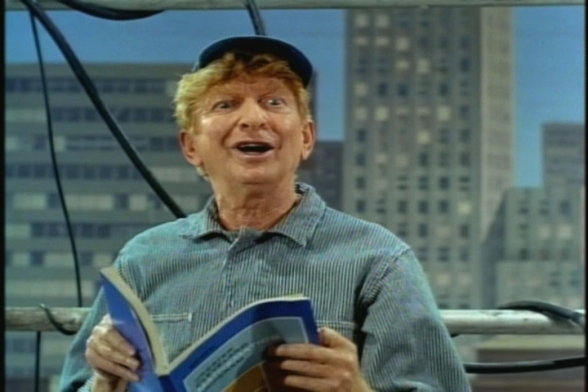 Sorry that I’m late with my Family Affair series this week–I was busy with my own adorable moppet yesterday. (Boy, would she hate hearing herself described that way.)

Coming home from school, Buffy and Jody announce proudly that they have been promoted to “upper first grade.” 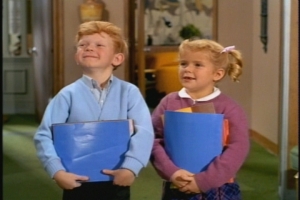 Of course, “upper first grade” isn’t really a thing. Their school seems to be using “lower first grade” as a way to orient a constant influx of new students–a realistic-sounding situation at an urban public school.

They are disappointed that Uncle Bill is not there to share their joy–he’s working on a project in New Jersey. 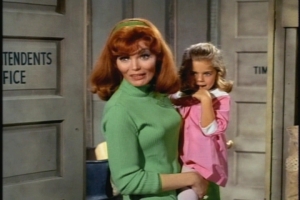 He’s also working on this Jerseylicious babe, who’s caring for her niece when Bill first meets her. She’s an aunt, he’s an uncle–what could go wrong?

Meanwhile, the twins exult in their new, advanced textbooks. 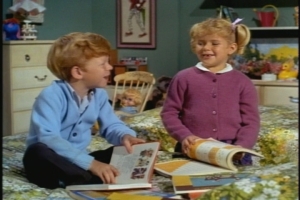 Buffy and Jody have a genuinely funny exchange about their reading books.
Buffy: “We got promoted from Dick and Jane, and I’m glad–all they ever did was run and play.”
Jody, in mildly mocking tone: “And watch Spot. ‘Oh, see Spot.'”
Buffy: “Oh, see Spot run.”
Jody: “Run, Spot, run.”
Jones and Whitaker seem to enjoy their chance to be snarky.

They soon find themselves stumped by “the new math,” however. Their engineer uncle could probably help them, but he’s spending all his time across the Hudson with Meg, who turns out to be a liberated, marriage-hating free spirit who has no interest in even hearing about the twins’ problems. 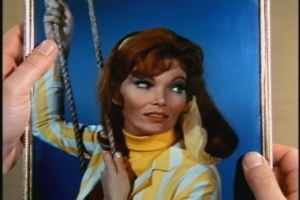 From this glamour shot of Meg, Uncle Bill correctly divines that she is an avid sailor. What it tells me is that she went to a cheesy portrait studio.

So where can Buffy and Jody turn for help? 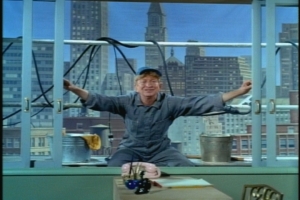 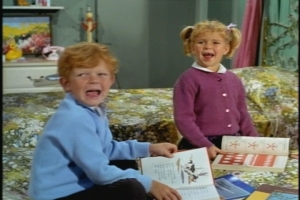 I would scream, too, kids, if that guy appeared outside my 27th-floor bedroom window and OPENED it. The fact that he talked with Winnie the Pooh’s voice would only make it more terrifying.

Actually, Buffy and Jody are squealing with delight at the sight of their “friend,” Mr. Frack, the window washer. Mr. Frack says things like, “The difference between dumb and smart is how much you know,” so viewers quickly perceive where he falls on the dumb-smart divide. Naive Buffy and Jody, however, accept his help with their math homework.

Uncle Bill’s still living it up with Meg (in a nightclub with Family-Affair green walls! Meg’s home has them, too!) and even plans to spend the weekend on a boat with her before he departs on a two-week work trip to the Yucatan. (Don’t worry about Meg’s virtue. The script takes pains to tell us that other people will be on the boat, too, and that the men and women will have separate sleeping quarters.)

The school alerts Uncle Bill to the deplorable state of the twins’ math homework, and while he’s looking for answers, he happens to run into their “tutor.” 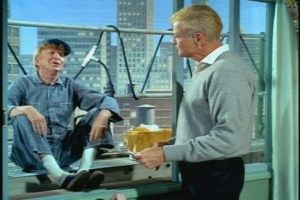 It doesn’t take Uncle Bill long to put two and two together. (Amazingly, this episode misses its chance to do a math joke like that.)

He relieves Mr. Frack of his “helper” role while sparing the man’s feelings. 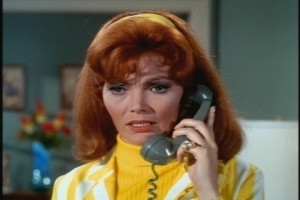 Meg, already dressed in her sailor suit, is sad to hear that Bill is cancelling their plans so he can spend the weekend helping Buffy and Jody with math.

He assures her they’ll get together again sometime. I’m glad he doesn’t blow her off completely, even though I think he should be looking for more of a Fraulein Maria and less of a Baroness Schraeder now that he has kids. 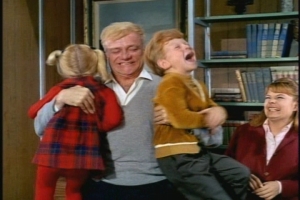 The kids, of course, are almost pathetically happy to learn Uncle Bill will spend the weekend with them.

This isn’t a great episode, but it has some high points. I love Buffy and Jody’s conversation about Dick and Jane. Mr. Frack and Meg are both interesting characters. I like the way this script shows that Bill’s priorities have changed without demonized Meg for having different priorities.
We also get another chance to see Brian Keith’s rapport with child actors. 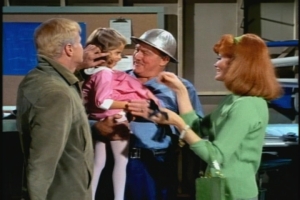 I like the obviously improvised tickle he gives this girl, who doesn’t seem comfortable in front of the camera.

We also get to see him save a scene with Buffy and Jody. 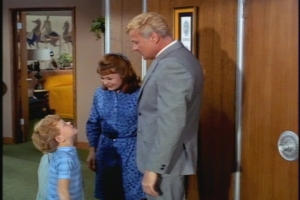 Johnny Whitaker has walked too far forward, blocking Anissa Jones, who has the next line. 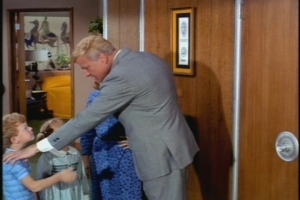 Brian Keith quickly moves Whitaker out of the way. 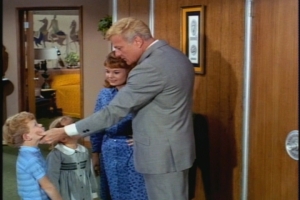 He then covers up the push with an affection rub of Whitaker’s face.

Mr. Frack: Sterling Holloway. Meg: Kipp Hamilton. Tim: Roy Roberts. Sally: Andrea Sacino. Holloway was the voice of Winnie the Pooh in many movies, including some that Sebastian Cabot narrated. He was also the Cheshire Cat in Alice in Wonderland, Roquefort in The Aristocrats, Kaa in The Jungle Book, Mr. Stork in Dumbo and Woodsy the Owl in many public service announcements. He had an extremely long career in films that spanned half a century and included such films as Meet John Doe and The Blue Bird. Notable was his role in 1945’s A Walk in the Sun. He also had a recurring role in The Adventures of Superman.

Hamilton’s most memorable TV guest appearance was as Pleasure O’Reilly in an episode of Bewitched. She seems to have quit acting shortly after this episode aired, around the time that her first husband died of a brain tumor.

Roberts also had a Bewitched connection–he played Darrin’s father. He had recurring roles in Petticoat Junction, Gunsmoke, The Lucy Show and The Beverly Hillbillies, among other shows.

Sacino was a voice in 1970’s special Santa Claus is Coming to Town. She appeared in several episodes of My Three Sons and had a regular role on a short-lived mid-sixties show called Many Happy Returns.

Uncle Bill is an experienced sailor. Buffy and Jody are learning Spanish at school. (This is another nice touch of realism for a big city school. In West Virginia, the only Spanish we learned before 8th grade was what we could pick up on Sesame Street. On the plus side, I don’t think the “new math” ever found its way to us.)

This article describes Brian Keith’s unusual work schedule, which explains why Uncle Bill was away so frequently. (The article also reveals his early ambition to be a sailor and his problems with math–interesting in the context of this episode.)