We open once again in the twins’ classroom. We’ve been here a lot lately, haven’t we?

While the teacher’s back is turned, Jody is fondling a baseball, which his friend Peter wants to see.

The baseball’s route goes through Albertine, who sits between the boys. 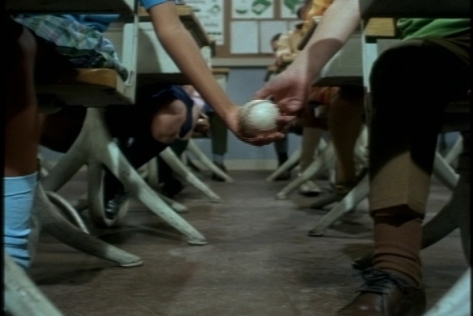 Unfortunately, Albertine drops the ball, which clatters to the floor. 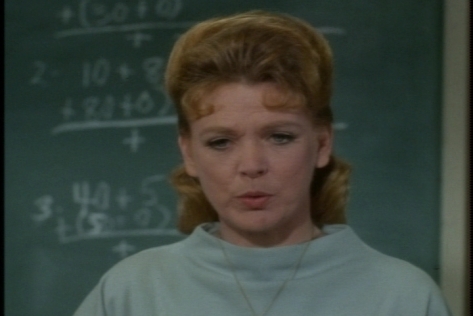 She’s clearly having a bad day.

Like the good boy he is, Jody confesses that the ball is his. After the crisis passes, Jody sends a friendly smile Albertine’s way, but she ignores him. He and Buffy exchange bemused looks.

This expression has meme potential.

After school, Jody retrieves his baseball from the teacher and explains its provenance: Willie Mays hit it foul at a Mets-Giants game Jody and Bill were attending, and Bill caught it. (Later, we’ll learn that he also got Mays to autograph it.) 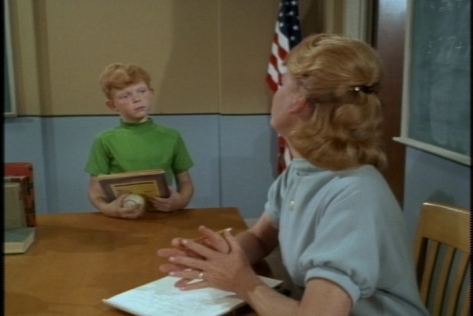 Miss Cummings must be a baseball fan because she decides to go easy on Jody.

Before he leaves, she asks him how the new girl–Albertine–is getting along. Jody says he doesn’t play much with girls, other than Buffy, but he’s noticed Albertine sitting by herself a lot.

When the twins arrive at home, they are surprised to see Albertine in the lobby.

She notes that she only has to wait alone because her father is out of town.

The next day at school, the twins join Albertine at lunch time.

Buffy is jealous that Albertine is eating “jelly bread.” The twins have to make do with roast beef. (I think the presence or absence of protein is a class indicator. Remember the “bread and sugar” gang?)

Albertine says her father, a world-champion chess player, taught her the game.

When they find Albertine in the lobby again that afternoon, the twins marvel that her mother attends so many parties.

They suggest that she come upstairs for a chess match with Mr. French, and Albertine agrees.

Buffy introduces her to Mrs. Beasley, and Jody shows her the bridge model he made.

When he mentions that Bill is overseas a lot, Albertine says her dad is, too…because he flies airplanes…and he was a hero in the war. Yeah, that’s the ticket.

“You know, the war,” Albertine replies.

Seeing Jody’s autographed baseball, she also claims that her dad is a big league player.

If you aren’t starting to feel uneasy about Albertine’s father, you haven’t watched much TV.

French and Albertine have their match. He’s surprised when she makes a move that exposes her queen.

I know nothing about chess, but that sounds bad.

Bill and The Bowed One come home in time to see the match’s suspenseful conclusion.

French is stunned when she declares checkmate.

The twins fill Bill in about Albertine’s chess champion father and his many achievements. Albertine clams up, however, when Bill asks his name. 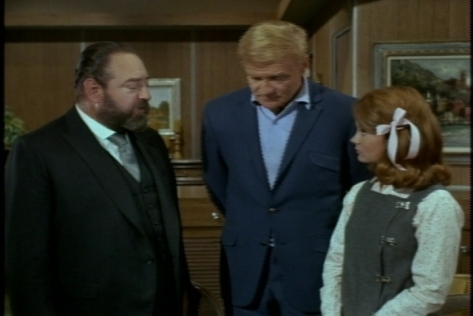 Trying out one of her psychology class words, Cissy speculates that Albertine is suffering from delusions.

As Albertine says goodbye to the twins, her tales grow even taller: Her family has a big car and a Japanese chauffeur, and her neighborhood is blocking off the street to celebrate her father’s impending return from out of town. She also says her father loves kids like Bill does–it’s touching that she picked up on that so fast.

The next day after school, Albertine leaves for home before Jody can give her his baseball–he wants her ball-player father to autograph it.

The twins convince French to swing by Albertine’s place on the way home. How they know where she lives, I have no idea. 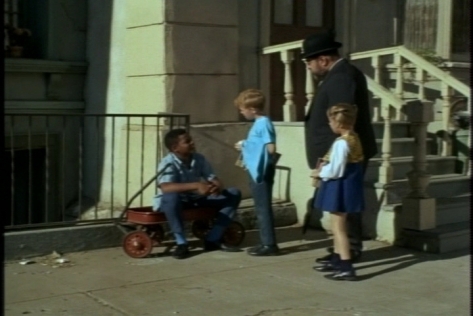 Once they are in the general vicinity, they ask the first black kid they see how to find Albertine.

He points out where she lives, but he is amused when the kids start bombarding him with questions about Albertine’s amazing father.

(It seems like French should have twigged to what was going on at this point and found a way to avoid the unpleasantness to come.)

“Albertine don’t have no father,” he tells them.

The twins refuse to believe that Albertine’s father abandoned his family a long time ago.

“Man, has old Albertine been laying it on you!” the neighborhood youth chuckles.

Because Buffy doesn’t speak jive, French has to translate this into “telling a falsehood.”

When poor Albertine emerges from her building, the boy mocks her cruelly.

He laughs about her “Chinese chauffeur.” He also says “ooo-eee” at one point. Must be a favorite neighborhood expression.

That guy’s a real jerk. He reminds me of almost every kid in my elementary school. 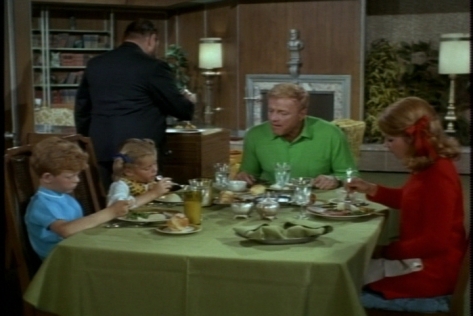 That night at dinner, the kids struggle to understand what happened.

Bill says Albertine wanted a father so badly that she made one up. He also suggests that they avoid mentioning the subject at school and just treat Albertine normally.

Buffy says that if she had to make up a father, she would make up one just like Bill and Mr. French. Aww. I saw the Bill line coming, but it’s sweet that she included French.

Albertine fails to show up for school the next day, but later the kids see her waiting in the lobby.

Albertine is unresponsive, and Cissy cautions that maybe she would rather be alone.

“Nobody would rather be alone,” Buffy says.

Jody, much too loudly, adds, “We don’t care if her father ran away.” Ouch.

That night, Buffy and Jody pour out their feelings to Bill.

This is an unusual camera angle.

They wonder whether Albertine couldn’t just adopt Bill, as they did. Bill tries to explain that he can’t do much to help Albertine, but eventually they convince him to try talking to her.

When Albertine sees Buffy and Jody at her door, she recoils in horror.

I know some Family Affair haters who would react the same way, for different reasons.

Albertine’s mother demands to know why Bill is at her door.

He’s understandably sheepish, admitting that the situation is none of his business, but explaining that Buffy and Jody have been worried about Albertine.

Mrs. Smith is shocked to learn that Albertine has been playing hooky from school for a week. Getting her daughter an education is very important to her.

Mrs. Smith reveals that her husband left the family because he couldn’t handle being unemployed while his wife earned money doing laundry. She also says that it was a doorman at a building where she worked who taught Albertine chess.

(For reasons that aren’t clear to me, she specifies that the doorman was a foreigner. Maybe he was Albertine’s inspiration for the Japanese chauffeur?)

Bill asks to speak to Albertine, and Mrs. Smith agrees.

Bill compliments the girl on her “garden,” but she says it’s just a kitchen–an old, dirty kitchen.

Bill says he understands how she feels about not having a father because Buffy and Jody don’t have a father or a mother. He talks about how unprepared he was for raising children when the twins arrived and how helpless he felt hearing them cry at night. All he could do was love them–the same way Albertine’s mother loves her.

Albertine doesn’t say anything, but she seems to think about his words.

The next day, Buffy and Jody come home from school in a good mood. Albertine came back to school and said hi to them.

When French wonders if that’s a major development, Bill says it’s a start.

This is a nice episode that handles potentially sensitive issues with grace. It’s one of many episodes exploring the diversity of New York City. These “Buffy and Jody meet the poors” episodes have the potential to come across as patronizing, but the show’s heart is clearly in the right place. The fact that Buffy and Jody have lost their parents gives them some kind of kinship with kids in other rough situations.

The show has really progressed in its use of African-American actors since Season One, when it was rare to see one, let alone hear one speak a line.

Jody’s bridge is a call-back, and we get another French reference to “the playing fields of Eton.”

No one here had a very long TV career. Mittie Lawrence’s most visible role was in Funny Girl as Barbra Streisand’s personal assistant. She’s most familiar to me, though, from an Adam-12 Christmas episode–the one where the kid wanted a dump truck. Lawrence was the life partner of prolific character actor Robert DoQui, who also made one Family Affair appearance.