Bill’s date this week is cute, but he’s not paying any attention to her. 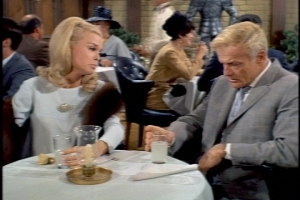 Eventually, she gets him to open up about his worries–he’s suddenly decided that New York is no place to raise kids.

Bill loves the city, but he thinks the “dirty air,” pushing and shoving, and three-block walk to the park make it a bad environment for his nieces and nephew.

His mood grows even darker on the way home. 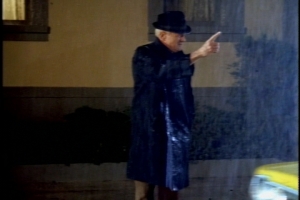 Having had its one annual snowstorm last week, New York is now experiencing heavy rain.

Unable to get a taxi, Bill is a sodden mess by the time he walks back to the apartment. 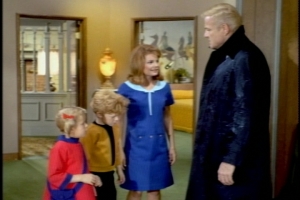 French doesn’t make things any better by calling the rain “invigorating.” I guess that’s the Englishman in him talking.

Observing her uncle’s reaction, Buffy says, “I think he’s getting another mood.”

Bill sends the kids off to do their homework.

Somehow, they end up in the kitchen bothering French instead. 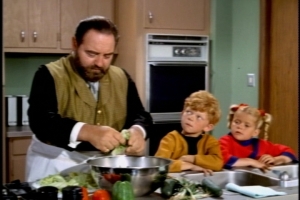 Giles French Cooking Tip: Always tear lettuce with your hands instead of cutting it with a knife, which can give it a metallic flavor.

Buffy and Jody wonder aloud why the metal bowl doesn’t have the same effect.

Then they wander off to find Bill, leaving French to ponder the metal bowl conundrum.

Buffy and Jody ask Bill if they can watch him make faces as he shaves. He obliges them, but he’s soon shocked to hear the foul language Jody has learned in the wicked city.

After Bill sends Jody off to fetch French, Buffy tells her uncle that she’s no longer taking Mrs. Beasley to the park. Buffy’s friend Pamela was nearly hit by a car the day before, and Pamela’s doll Gertrude suffered a smashed head. Buffy notes that Pamela is having a funeral for Gertrude when the weather improves.

“That should be fun,” Buffy notes brightly.

When French arrives, Bill sends Buffy to join her brother in the kitchen.

Bill interrogates French about where Jody learned such terrible language.

Of all the people he could blame–school friends, park ruffians–French chooses Scotty to throw under the bus. He does try to defend the doorman, though, by calling him “the salt of the earth” and adding that such language is “typical of city life.”

That was the wrong thing to say.

Just to make Bill’s terrible, horrible, no good, very bad day complete, Cissy barges in asking about the appropriate age to become engaged. Bill doesn’t care for her box-boy intended; he says the boy “looks like a refugee from the House of David.”

Cissy doesn’t get it and neither do I, but it seems to have something to do with the length of his hair.

After all this drama, Bill makes up his mind–he’s ready to chuck city life.

So, we’re off to Connecticut, which is having a very, very late fall, apparently.

“This is the only place to bring up kids,” Bill’s realtor assures him as they check out a lovely property. 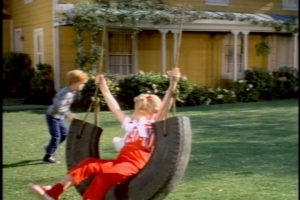 French notes approvingly that the place resembles the Duke of Glenmore’s weekend estate in Kent–although he does emphasize the word “weekend.” 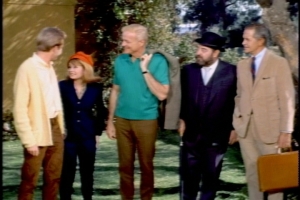 And countryside or no, Cissy doesn’t let any grass grow under her feet. She’s already got her hooks in the grandson of a neighbor.

French, sensing that Bill has made up his mind, tells Buffy and Jody that “this bird sanctuary is about to be our new home.” 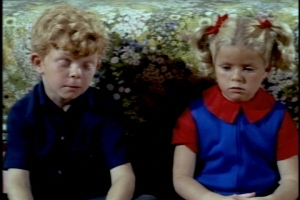 While the twins think the country is a nice place to visit, they don’t want to live there.

Cissy tells them they all need to go along with Uncle Bill’s wishes.

She reminds them that “no one has ever been as kind to them” as Uncle Bill, and that if he hadn’t intervened, they’d still be scattered. Actually, she’s going a bit overboard here. Surely their own parents were “kind” to them.

The twins agree to put on a happy face about the move, which becomes more difficult when Bill tells them they’ll be moving by the end of the week. How do you close on a house that quickly?!

The kids “happy faces” look like this, but they manage to fool Bill.

Buffy returns some borrowed toys to Pamela, who’s upset that Buffy will miss the doll funeral.

She was supposed to serve as “all the pallbearers.”

Jody says his goodbyes to Scotty, who leaves him with some words of wisdom.

“If you think life is tough now, just wait till you grow up.”

Cissy parts with her boyfriend, despite his pleas that they get married. She could get a job, too, and they could have “a real swinging time.”

Cissy manages to resist this offer. (Is his hair really any longer than Connecticut Guy’s?)

Meanwhile, French vents to Miss Faversham about the move. 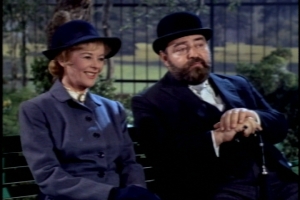 She makes the mistake of suggesting that he could give notice if he doesn’t want to leave the city.

French goes all “My Dear Miss Faversham” on her and says he owes Bill “a full measure of loyalty.”

Back at home, the Davis apartment is emptying rapidly.

This is the first African-American actor we’ve seen on the show for weeks. Too bad he doesn’t get any lines.

The kids are looking so miserable that even Bill starts to pick up on it.

Cissy explains that they are sad about leaving “the first real home we’ve had as a family,” a place where they’ve felt “warm and safe and loved.”

Once again, she’s forgetting their actual “first real home,” but she gets through to Bill.

He announces that the family is staying put.

Good thing that reversing a house purchase is not at all difficult. 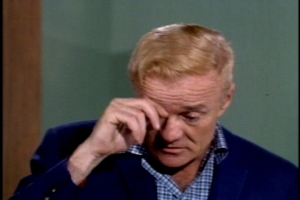 Bill must be wondering, though, what to do with all the Family Affair green paint he’d undoubtedly ordered to spruce up the country house. 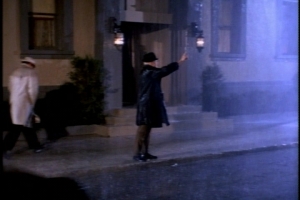 Soon, it’s raining again in the city, and Bill is searching in vain for a cab. (He should really think about buying an umbrella.)

But when he returns home to a happy family, and the Violins of Emotional Resonance ring out, he decides city life isn’t so bad.

This script has lots of cute dialogue, but it also has room for improvement. If, for example, Bill overheard the kids talking about some Terre Haute experiences they missed, his desire to leave the city would seem less like a wild hair. If he reminisced a bit about his own Indiana boyhood, his motivation would be more clear. And his change of heart at the end would be more plausible if the house sale hadn’t already gone through. 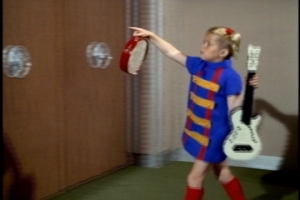 Random wardrobe observation: Buffy looks like a xylophone in this dress… 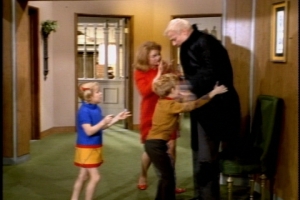 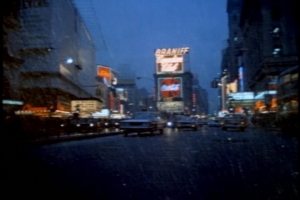 I like this rainy Times Square establishing shot, with the Braniff sign and all. This interesting page about Braniff says the sign went up in 1964 and was the largest moving display billboard in the world at the time.