This week’s adventure begins with Buffy and Jody greeting Scotty the doorman. Clutching Bill’s boots, the twins inform Scotty that their uncle is traveling to Maine for moose-hunting.

Aren’t their coats and hats cute?

Upstairs, Bill is haranguing poor Miss Lee by phone. He doesn’t want to be disturbed while he’s away. 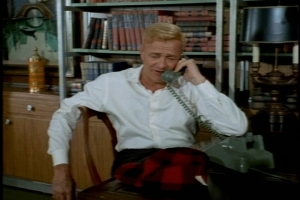 “Don’t mess up my vacation and I’ll bring you back an antler,” he says. I wonder what she mutters under her breath as she hangs up the phone. 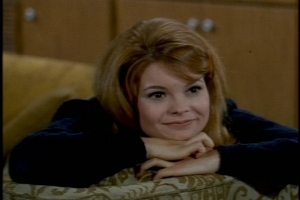 She asks Bill if she was wrong to accept two dates with Norton for the upcoming weekend–one for a movie and one for brunch.

Bill doesn’t see any problem with it.

He’s mostly just excited to get his plaid on and start killing some animals.

He even volunteers to finish his own packing because French has plans to spend the evening visiting his brother on Long Island.

He awakes to bad news the next morning, though. A blizzard has struck New York and trapped French on Long Island.

French seems upset about the situation, but I suspect he’s pleased to have his version of a “snow day.”

While he waits to hear if his flight is cancelled, Bill sends the twins off to make breakfast–an inexplicable lapse in judgment. 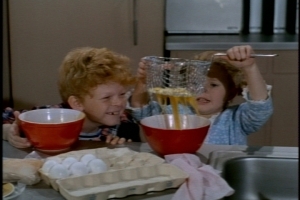 This scene is cute, especially when Buffy attempts to strain shell fragments out of the eggs. Johnny Whitaker’s giggle is genuine. (Also, I like those Pyrex mixing bowls.)

Cissy comes along in time to rescue breakfast, but her weekend soon takes a turn for the worse.

Cissy is smart enough to know that, as a TV character, she will only sneeze when a raging cold is descending upon her. She’s horrified that Norton Webberly might see her with a red nose. Bill tells her she won’t be going out at all, unless the family doctor approves. (Really–consulting a doctor over a simple cold?)

Bill’s upset, too, because all flights out of JFK are grounded. He doesn’t feel any better after phoning one of the colleagues waiting for him in Maine.

Charlie’s all, “Oooh, you’re having a blizzard? The weather up here is perfect.”

Since Buffy and Jody are snowbound, Bill allows them to invite a few friends over.

He regrets this decision right away.

French, reached by phone, proves that he’s earned his parenting stripes over the past year.

He suggests that Bill employ “the modern-day pacifier”–television. (Note that French’s brother likes Family Affair green as much as everyone else on this show.)

Bill sets the kids up in the den with Captain Hippopotamus.

As soon as he leaves, they switch the channel to a horror movie. I like that touch–these kids seem a little too old for Captain Hippopotamus.

Meanwhile, the doctor has ordered Cissy to bed. (Why can’t I find a doctor who will order me to bed when I get a cold?) She has to cancel her first of two dates with Norton, but she refuses to phone him herself. Norton has praised her “sexy voice,” and she doesn’t want him to hear the congested version. She enlists Sharon to do the dirty deed, instead.

To pass the time, she washes and sets her hair, only to find that her hair dryer is on the fritz.

My mom had a hair dryer like that when I was very little. I loved playing with it.

I never enjoyed hard plastic curlers, though. These huge ones look especially uncomfortable.

Bill, trying to fix the hairdryer, plugs it into the same outlet as the TV set. The kids think it’s cool when smoke starts billowing out of Dracula’s mouth–until the TV shorts out completely.

Bill also has to deal with Sharon, who never misses a chance to stir the you-know-what.

She’s let Cissy know that Norton is taking another girl to Radio City.

Bill practices some tough love on Cissy. He gets her to admit that she’s only just met Norton and is already hoping for “something they write great novels about.” He tells her that the relationship could be all in her mind, and that she’s not going to “be a great sensation” with every guy she meets. Surprisingly, this conversation improves Cissy’s mood.

While Cissy occupies Bill, the twins and their friends amuse themselves. Bill has already told them they can’t build a snowman on the terrace.

Seizing on a loophole, they haul snow inside and build their snowman in the living room.

Their snowman is actually a snow Mr. French. They are wondering what to use for his beard when Bill enters the room. Personally, I would have lost it right here. Buffy and Jody are old enough to know better. Bill reacts calmly, though he does order the twins to remove the snow and sends their friends home. 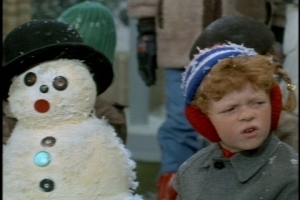 I guess he realizes that this special dry kind of snow will be easy to clean up.

Soon, Bill’s colleague in Maine calls with news. After buttering up a client all day, he’s landed their firm a big tunnel contract. He and the client are flying to White Sulphur Springs to finalize the paperwork, and he encourages Bill to meet them there with his golf clubs.

(Woo–a shout-out to my home state! Surely, they are referencing  The Greenbrier. Golf is not a four-season sport in West Virginia, though.)

Bill, who was anticipating a real vacation rather than a working one, finds Charlie’s news underwhelming. He decides to spend his time off at home.

A delivery man shows up with flowers and a nice note from Norton, so Cissy ends the episode happy.

When French finally returns, he finds that Bill is happy, too.

He says he’s experienced “the best change of scenery someone’s ever had with a couple of kids and a moonstruck teenager.”

It’s funny how infrequently it snows in the Davis version of New York.

This is a cute episode, and it’s nice that Bill ends up enjoying the little aggravations of home life. If he spent more time at home, however, I’m not sure he’d be so sanguine. Indoor snowmen and cranky teens are probably more bearable as a novelty than as an everyday reality.

I’ve mentioned before that bit-part actors seem to find a niche. Kellogg usually played guards or policemen. This is Victor’s second Family Affair appearance; Alberoni and Lukas, of course, are mainstays.