This week’s episode begins with French hustling the twins off to school.

In the elevator, they encounter a sad-looking boy clutched protectively by his mother.

Buffy and Jody, firing off a series of questions that embarrass French, learn that Stanley is new to the building and getting ready to attend his first day at their school. They are pleased to learn that Stanley, like them, is in second grade. (Whew! We’ve emerged safely from last week’s time warp.)

They can’t understand, however, why Stanley and his mother are planning to take a taxi to school, rather than walking.

The light begins to dawn on them when they see Stanley walk out of the elevator.

French explains to them that Stanley has a brace on his leg and encourages them to be friendly and helpful to the boy at school.

(Leg braces always intrigued me when I was a kid. I saw them a lot on TV kids but never on any real ones. Apparently, they were frequently used by victims of polio, which was no longer an issue during my childhood–or Buffy’s and Jody’s.)

Oh, and one more thing before we get to the kids’ school–we get a Scotty sighting in this episode!

At recess, Buffy notices that Stanley is sitting by himself and tells Jody that they should help him. Jody invites Stanley to play marbles with his multi-racial band of friends, but by the time he convinces Stanley to play, the other boys have moved on to leap-frog. Jody still encourages Stanley to join them.”If you fall, you fall,” he says, noting that all the boys fall sometimes.

I have a bad feeling about this.

With exquisitely bad timing, Stanley’s mother picks this moment to show up at school with Stanley’s sweater. 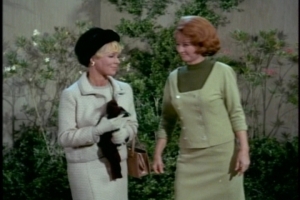 Now I’ve got a really bad feeling about this.

Sure enough, Stanley hits the grass, and his mother doesn’t take it well.

She bans Buffy and Jody from playing with Stanley again.

Well, that’s going to be awkward because meanwhile, back at the apartment building… 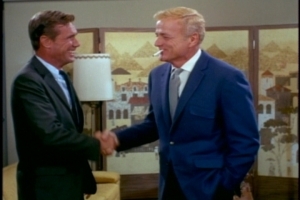 …Bill meets up with one of his many, many old friends–and this old friend happens to be Stanley’s father. (Incidentally, Bill smokes like a chimney throughout this episode.)

Doug invites Bill to stop by later to catch up with him and his wife Estelle. Bill’s visit is marked by pained glances between Doug and Estelle when the subject of children comes up. Sheesh, their kid has a leg brace, not that “elephant man” disease! Eventually, Stanley himself appears, and Bill notices how protective Estelle is of her son.

Stanley’s apartment has lots of Family Affair green…and what is that table/shelf thing protruding from the wall?

When he returns to his own apartment for dinner, Bill learns that Estelle has forbidden Stanley to play with Buffy and Jody.

A worried Bill tells French that this situation is bad for the twins as well as for Stanley–in the future, Buffy and Jody might try to avoid people with handicaps.

He decides to have a man-to-man, smoker-to-smoker talk with Doug.

Doug agrees that Estelle is overprotective, but he is reluctant to intervene.

Eventually, however, he agrees to let Bill take Jody and Stanley to the park for some kite-flying.

Bill couldn’t have come up with an activity that doesn’t require running?

Even before they leave for the park, the situation deteriorates. Stanley has some kind of male-ego chip on his shoulder, and he challenges Jody to a fight. Our sweet-natured Jody has no interest in fighting, but Bill encourages the boys to settle their differences through “Indian wrestling.”

We called it arm wrestling when I was a kid, and not for any PC reasons, I’m sure. We weren’t very PC about Native Americans back then.

Showing her usual flair for timing, Estelle barges in, having learned about the kite-flying outing and wanting to nip it in the bud. 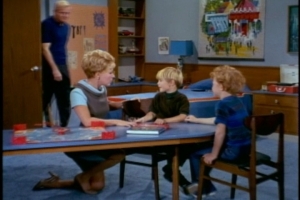 As it turns out, Stanley is an arm-wrestling wizard. When Estelle sees how proud he is to have beaten Jody, she realizes that he needs normal boy experiences.

Soon, the boys are flying their kites in Central Park. 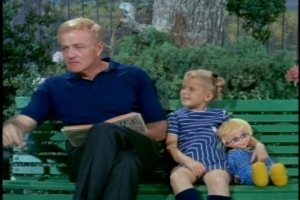 Buffy, who prefers to sit with Mrs. Beasley, Bill, and Bill’s second-hand smoke, expresses her admiration about the way Bill handled the Stanley situation. 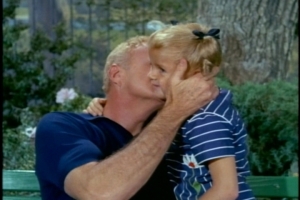 This is a nice episode, one of many in which Buffy and Jody meet a child who is different from them in some way. Uncle Bill’s opinion, that it’s as important for twins to experience friendship with Stanley as it is for Stanley himself, seems rather progressive. 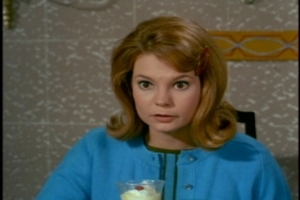 Another episode highlight: Buffy and Jody teasing Cissy about her latest boyfriend, Harold, a “tall, skinny guy whose bow tie wiggles up and down when he talks.”

Michael Freeman was a cutie and an okay child actor, so it’s surprising he didn’t get more work. His most interesting credit is “The Boy Pusher” in the 1973 TV movie Go Ask Alice. (I see the whole movie is available on Youtube. That’s got to be good for some laughs.)

Dubin was Punky Lazaar in several Partridge Family episodes.Recent titles in his filmography suggest that his career has gone in, um, a different direction lately.

Lupton starred in a 1950s Western series called Broken Arrow and a short-lived 1960s daytime soap called Never Too Young. He played Tommy Horton on Days of Our Lives from 1967 to 1980. He appeared in an episode of the Sebastian Cabot series Checkmate and in the 1972 film Napolean and Samantha with Johnnie Whitaker. 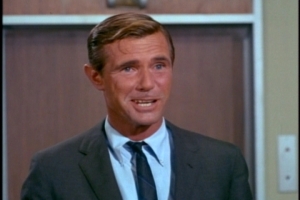 Forrest found modest film success in movies directed by Ida Lupino (who would guest star on two Family Affair episodes herself); the first of these was Not Wanted in 1949.

The length of Buffy’s pigtails varies from scene to scene–see below and note the length in relation to her ears. They are shorter in her scenes with Uncle Bill; Brian Keith’s abbreviated shooting schedule undoubtedly led to these scenes being shot at a time far removed from the episode’s other scenes. 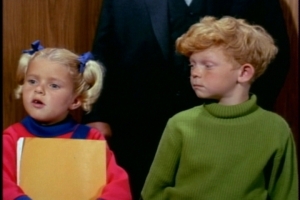 Less easy to explain is the way her hair bows change color from red to blue in between leaving the Davis apartment and entering the elevator. Freaky! 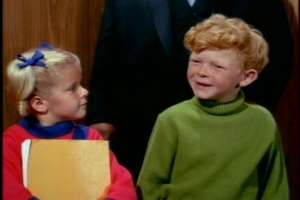 “Once in a while, she just stands there and looks at us and says, ‘Why didn’t I become an airline hostess?”–Buffy, describing her teacher.

I know I’ve been stingy with bonus features lately, but my husband bought me something yesterday that I just had to share.

This is one of the few Family Affair toys I didn’t have and one that I particularly wanted–I love Jody’s ridiculous expression on the box. Note also that Mrs. Beasley is wearing a red dress, and Cissy appears to be a 35-year-old woman.

On the inside, the likenesses are even worse.

All the characters except Cissy have separate top and bottom halves, as well as separate arms.

Wiseacre kids must have had fun with this feature, such as by giving Jody a skirt, Bill a weight problem, and French some tiny legs.

I actually prefer the Colorforms version of the Davis apartment to the real one. 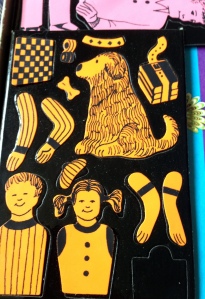 And Colorforms Buffy and Jody are lucky–they get a dog.