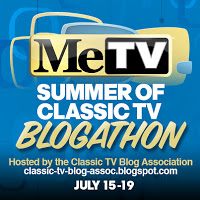 Attention classic TV fans: Don’t Miss Me-TV’s Summer of Classic TV Blogathon, starting July 15! All week long, a large collection of bloggers will be sharing their thoughts about great shows on Me-TV’s schedule, including That Girl, Bewitched, The Odd Couple, The Mary Tyler Moore Show, and many more. (Of course, I’m particularly interested in the bloggers who will be turning their attention to Family Affair.) I’ll be posting my entry, a look at Leave it to Beaver from Ward Cleaver’s perspective, on July 19.

Many thanks to the Classic TV Blog Association for hosting this event and to Me-TV for making so many classic shows available to viewers.

Now, on to Family Affair…

Written by: Hannibal Coons (Seriously? Apparently so, although his real first name was Stanley.) and Harry Winkler. Directed by: Charles Barton.

This week’s episode opens as Uncle Bill prepares for a date, blissfully unaware of all the trouble that’s about to rain down on him.

That trouble begins innocently enough, when Jody requests help with a bridge he’s designing for school. Revealing that he’s learned his lesson about such projects, Bill first seeks assurance that parents are allowed to help.

As Jody and Bill talk engineering, Buffy barges in with exciting news–her dance studio has picked her to try out for a television role.

Jody resents Buffy’s intrusion, while Buffy finds Uncle Bill less than enthralled with her news. (In fairness to him, it’s been established that he hates ballet.)

Neither kids has to worry about it for long, as Bill soon shoos them from the room in preparation for his date.

Buffy and Jody introduce themselves to the lady in question, who has some kind of tumbleweed attached to her head.

“At Uncle Bill’s age,” the kids observe, “men are just more interested in pretty ladies than in little kids.” Ouch.

Later that night, Buffy confides her troubles to Mrs. Beasley.

“I’m glad you’re not a man,” she tells the doll. “At least I have one friend.” Ouch again.

Cissy overhears Buffy’s comments and gets that concerned look on her face–that look usually bodes ill for Uncle Bill.

She waits up for him to return from his date and tells him that he needs to spend more time with Buffy.

Uncle Bill agrees to do so, but when Cissy changes the subject to her latest boyfriend, Bill pleads exhaustion and heads for bed. Great–now all the kids are frustrated.

The next day, Bill makes time to talk with Buffy and to watch her “buttercup dance.” But now Cissy, who was so concerned about her sister the night before, tries to monopolize Bill’s attention for their delayed boyfriend discussion.

By the way, doesn’t the girls’ room look much more spacious than usual?

Soon, Jody enters with a request for more bridge assistance, but Bill keeps his focus on Buffy, especially when he learns that the TV producer she’ll be auditioning for is a friend of his.

Bill calls his friend to put in a good word for Buffy. (Oh, that’s why the room looked so spacious–the desk had temporarily disappeared, as desks are wont to do.)

At school the next day, Ronny Bartlett questions why he hasn’t been able to meet Uncle Bill yet.

Teenage boys are always so anxious to meet their girlfriends’ parents.

Cissy promises that she’ll make the introduction after school, but it turns out to be a chaotic afternoon at the Davis apartment.

In Bill’s absence, French has tried to help Jody with the bridge and made a royal mess of it.

Bill finds Jody sulking and refusing to work on the project at all.

Before he can offer much help, Bill has another obligation–taking Buffy to her audition.

Buffy gives an underwhelming performance for the TV producer, who has to explain to Bill that she’s not ready for prime time.

Bill takes a dejected Buffy home, where he finds an equally dejected Jody, as well as Cissy waiting with a nervous Ronny. 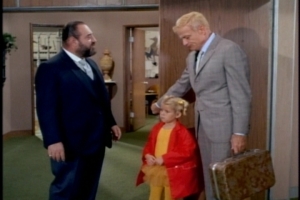 Random mystery: Buffy both leaves the apartment and returns to it in her leotard, so what’s in that awesome flowered suitcase?

Cissy springs upon Bill the news that she and Ronny are going steady and planning marriage in a few years. Now, from my study of old teen advice books, I know that parents considered “going steady” a fast train to nookie-ville, which explains Bill’s harsh reaction.

By the time Bill finishes his man-to-man talk with Ronny, fruit punch is spilling, the boy’s voice is cracking, and the “going steady” is over.

Cissy takes this development in the calm fashion that any teenage girl would. 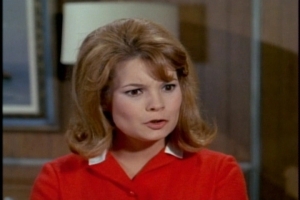 “You’ve ruined my life!” she screeches. “I love Ronny!”

By this time, Uncle Bill feels like the challenges of parenting have defeated him (and I’m feeling glad that I have only one child).

French, however, raises an interesting possibility–maybe parenting isn’t the problem. Maybe the kids are acting like little jerks.

Bill seizes on this theory with enthusiasm and calls all the kids into the living for for a talking-to.

Unlike real kids, the Davis kids accept that they’ve been making unreasonable demands on Bill’s attention, and everyone ends up happy.

These conflicts would arise in a real family situation, especially when the time Uncle Bill spends at home is so limited. I began the episode feeling sorry for the kids and ended it feeling sorry for Bill. It’s nice to see the kids have to take responsibility for their own behavior at the end.

This is the second appearance by Flanagan, best known for the TV version of The Ghost and Mrs. Muir. Oh, Me-TV–any chance you could resurrect that show?

Moore’s career included a regular role on Bachelor Father–a show with a premise similar to Family Affair‘s–and a part in 1963’s The Nutty Professor.

Fedderson, the son of executive producer Don Fedderson, would make many more appearances as Cissy’s date, usually named Gregg. He was the brother of Petticoat Junction‘s Mike Minor.

Uncle Bill once built a bridge over the Amazon.

“I do it better with my costume on–all fluffy and buttercuppy.”–Buffy, practicing her buttercup dance.