I’m ba-a-a-a-ck! I had a great vacation but I must have missed the Davis family–Brian Keith has appeared in my dreams the past two nights (and not in an entirely salacious way).

This week’s episode is an unusually violent one right from the very beginning.

The twins’ fight over the rules of checkers quickly escalates, as Jody threatens to “sock” Buffy.

Buffy runs to Uncle Bill, who is reclining in his chair and reading a book. (Somehow, I don’t enjoy many such moments as a parent.)

Uncle Bill explains that Jody must never hit a girl. (Jody wonders if that goes for kicking, too. It does.)

In true TV style, Uncle Bill’s words are put to the test the very next day.

When this girl approaches Buffy to join her for lunch and an exchange of schoolroom “tattles,” Buffy declines. She has to eat lunch with Jody, she explains.

Jody gives Buffy permission to desert him and settles down to eat his lunch alone. (Doesn’t he have any friends? I worry about that boy, sometimes.)

A decidedly undainty girl named Jeannie joins Jody and demands that he trade sandwiches with her.

We get our first insight into Jeannie’s troubled home life when we see what she’s brought to school for lunch.

Understandably, Jody resists trading, but Jeannie won’t take no for an answer.

After school, a ravenous Jody wolfs down a decent sandwich and explains the day’s events to Uncle Bill.

Bill is proud that Jody didn’t hit Jeannie, and Jody basks in his uncle’s approval.

The next day, Jody tries to avoid Jeannie by eating lunch inside with the janitor. She finds him later, though, and expresses her displeasure. 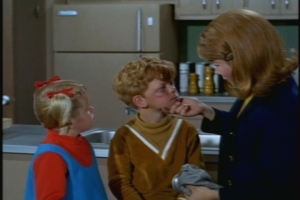 To her credit, Cissy steps in to protect her younger brother. She takes off for Jeannie’s neighborhood, a little slice of A Tree Grows in Brooklyn that exists somewhere between the Davis high-rise and the kids’ school. 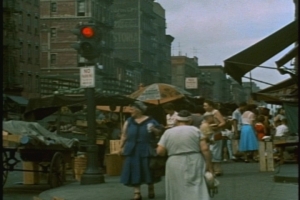 New York really is an amazing city, isn’t it? 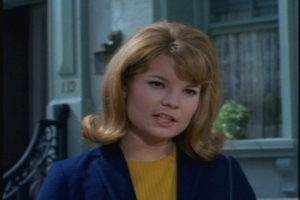 She tries to explain to Jeannie’s mother that Jody is in a difficult position because he knows it’s wrong to hit girls. We get a deeper insight into Jeannie’s home life from Mrs. Michaels’ reply–she says someone should tell her husband that rule. (According the laugh track, we should find that line funny.)

Finally, Jeannie’s mother tells Cissy to mind her own business.

Witnessing this confrontation makes Jeannie even angrier that usual. 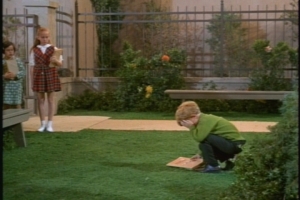 The next day, she decks Jody for no reason at all.

Uncle Bill decides it’s time to step in and talk to Jeannie’s father.

Unfortunately, he finds Mr. Michaels is no more ready to engage in reasonable dialog than his daughter is.

Afterwards, Jody is disappointed that Uncle Bill didn’t punch the guy. Bill explains that Jody should try to talk things out with Jeannie before she hits him again. This only results in an extortion scheme–Jody agrees to provide Jeannie with sandwiches and money to keep her off his case.

The ensuing fight goes by too quickly for me to capture any good images, but this is how it ends up.

Afterwards, Uncle Bill feels embarrassed and hopes to hide the whole thing from the kids. (He declines French’s offer to explain the situation to Jody through a lecture on the dangers of “craven appeasement.” I love French.)

Word spreads quickly at school, of course, and the twins report happily to their uncle that his forceful action has made Jeannie back down. They enlighten him a bit about the rules of the school-yard, where words aren’t as important as actions. 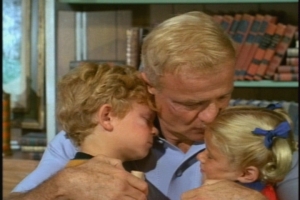 We have one of our requisite sweet endings. Sigh. Is it any wonder that I dream about this guy?

All’s well that ends well, except maybe for Jeannie and her violent, impoverished family. I’m guessing she’s in the women’s equivalent of Attica right now.

What old-school family sit com didn’t have a bully episode like this? In the ineffectual attempts of family members to find a reasonable solution, this reminds me of the Buddy Hinton episode of The Brady Bunch. (Elroy Schwartz, who wrote this episode, was the brother of Brady Bunch creator Sherwood Schwartz. He wrote several episodes of that series, but not the Buddy Hinton one.)

Flanagan, McClory, O’Malley. They should have aired this one on St. Patrick’s Day.

Flanagan was Candice in the TV series The Ghost and Mrs. Muir. (That’s a show I’d love to see again.)

Claire Wilcox was active as a child actress throughout the 1960s, but she dropped out of sight after a couple of Partridge Family appearances.

Jody only likes sardines that are “naked”–lacking heads and tails.