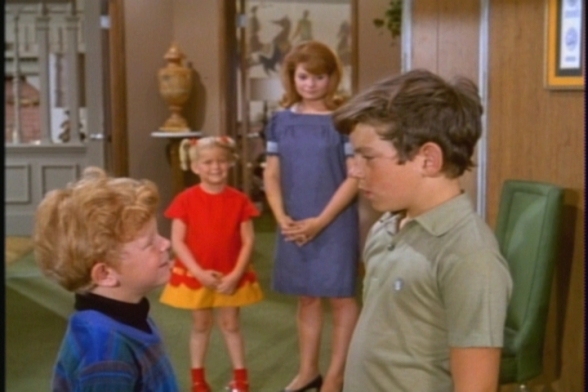 Welcome back to Family Affair Friday! In this week’s episode, Cissy tries to fix second-grader Buffy up with a boy in sixth grade, while Uncle Bill sexually harrasses a work associate.

Yeah, this is a pretty weird episode.

Our episode opens in the park, where Jody is playing football with a group of boys.

Here’s a shock–Jody is actually dressed appropriately for this activity!

The Barry Williamsish lad on the right is Andy, the charismatic leader of the football crowd. Andy makes a big impression on Jody–and on someone else. 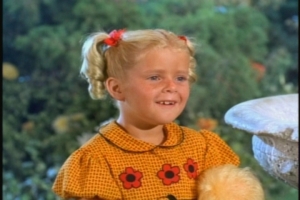 Uh-oh. Are we hearing what French will later call “the first faint yappings of puppy love”?

While retrieving an errant football from Buffy, Andy remarks that she is “cute.” That’s a strange thing for a sixth-grade boy to say about a doll-clutching second-grade girl, so I’m going to assume he meant “cute” like a kitten or a puppy or a baby.

Buffy takes the remark differently, however. That evening, with Andy in mind, she indulges in a Cissy-style primping session. 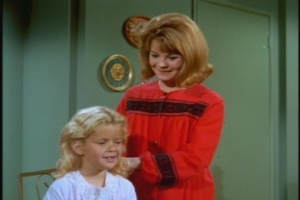 Buffy confides in Cissy about her secret crush, and they share a sweet sisterly moment.

Then things get weird: Despite knowing that her sister’s crush is in sixth grade, Cissy actively encourages Buffy to pursue this “romance.” 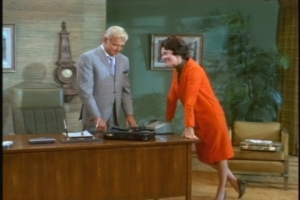 This gives him the chance to make lots of cringe-worthy remarks like “I know there’s a woman somewhere under that shell” while he attempts to turn every business meeting into a date.

Back at home, Buffy and Cissy convince Jody to invite Andy over to the apartment. Cissy then helps Buffy get ready for the big meeting. 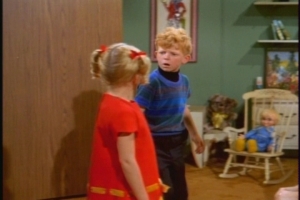 When Andy arrives, Buffy almost chickens out of trying to impress him–until Cissy chides her. 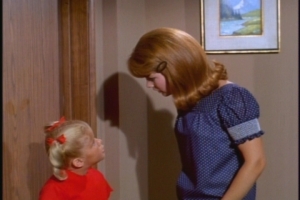 “A woman has to be aggressive,” says Cissy, who apparently failed to notice that the woman in front of her is a little girl.

Luckily, Andy can tell the difference between a woman and a little girl, and he quickly takes an interest in the nearest thing to a woman in the Davis household–Cissy.

He starts showing off to entertain Cissy and ignores Buffy–and poor Jody, who’s just trying to do some male bonding.

The ensuing scene is quite a switch for Cissy–she’s usually the one in the Face-Down Position of Despair.

Uncle Bill soon has to deal with his own disappointment.

Roped into a romantic terrace dinner and unable to get Bill to focus on work, Miss Lowell finally tells him that she’s engaged.

Chagrined, Bill realizes that he should have listened to her earlier protests that she wasn’t interested. Ya think?

To his credit, he takes responsibility instead of asking why she didn’t tell him this several non-date “dates” ago. My theory is that in the sexist 1960s work climate, she felt she had to maintain an illusion of romantic availability to get men to hire her at all. Either that or there was no fiance and she was just desperate to get Bill off her back.

(Now, personally, I wouldn’t fight too hard to discourage Uncle Bill’s advances. But, then again, I’m not Catwoman or Miss America 1955.)

After taking Miss Lowell home, Uncle Bill returns to the darkened apartment and finds a distressed Buffy on the couch. She fills him in on her crush, and they commiserate about heartache.

This is a sweet scene, but it would work better if we actually saw Uncle Bill and Buffy talking together. Instead, it’s just a series of alternating closeups. Because of Brian Keith’s shortened shooting schedule, the two halves of this conversation were presumably filmed at different times.

The dialogue in this episode is good. The Uncle Bill story is dated, but you have to expect such things in a show that’s almost 50 years old. The idea of Buffy having a crush is cute. The problem with this episode is the bizarre role Cissy plays. The writers could have avoided this problem so easily, too. If Cissy didn’t know Andy’s age until he showed up at the apartment, everything would make a lot more sense.

Anissa Jones gives a good performance here–being older than her character might have been an advantage to her, considering the subject matter. And I always love scenes where we get to see her hair down.

Lee Meriwether, Miss America 1955, is well known for parts on TV series like Batman and Barnaby Jones. She played Catwoman in the 1966 Batman movie. More recently, she played Ruth Martin on All My Children. And, hey–she’s on Twitter! I’m totally following her now.