Welcome to another installment of Family Affair Friday!

As our episode opens, Bill Davis is bringing a lot of work home with him.

French knows that working from home is a bad idea–the kids have just started their spring break. 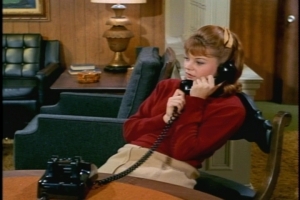 Cissy, meanwhile, is getting many phone calls and listening to the generically bouncy instrumental music that passes for rock and roll in 1960s sitcoms.

In fact, the kids are so unruly that at one point French has to tell a ping-pong-raquet-wielding Jody, “You will be in dire straits if you touch your sister with that weapon.”

Keep in mind: This is only the first evening of the kids’ vacation.

When an old friend of Bill’s calls to recruit the kids for a one-week spring break camp, Bill needs no convincing.

Soon he’s gazing dreamily into space as he contemplates a kid-free week.

His camp director friend shows up the next morning to claim the kids, including Cissy, who’ll be serving as a counselor.

“This is the part that’s the hardest–taking the kids away from their parents,” the camp director says, as French and Bill struggle to suppress their glee.

Uncle Bill, of course, doesn’t plan to spend his whole week working. He’s anxious to get his date on. It’s amusing how averse all his old girlfriends are to domestic life. As he begins to miss the kids more and more, he subjects a series of women to dull parental bragging.

He foists a Cissy composition on date number 2. 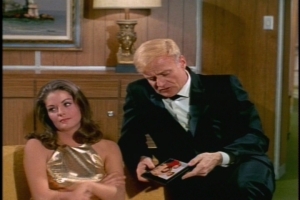 After each failed date, Bill marvels at how much the ladies in his life have changed. 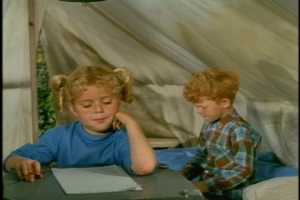 The kids are having fun at camp, but Buffy is struggling over a letter to Uncle Bill. She’s just not sure what she should say.

As the week goes on, Bill and French become increasingly concerned at the silence from camp. A camp, incidentally, that doesn’t have a phone. I think Bill has good reason for concern, especially since he didn’t research this camp in any way before packing off the kids.

For one thing, the camp seems to have placed 6-year-old Buffy in a tent by herself.

The peace and quiet in the Davis apartment soon becomes oppressive. 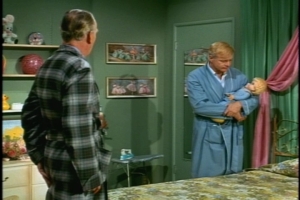 Uncle Bill is reduced to wandering into the girls room and cuddling Mrs. Beasley.

Mrs. Beasley! French and Bill get a simultaneous brainstorm–taking the doll to Buffy would be a good pretense for visiting camp and making sure the kids are okay.

Just as they’re ready to head to camp, however, the kids make a surprise return.

Yes, the camp let some of its campers leave early without informing their families that it would be doing so. I can see why the camp director has to call old friends up one by one to recruit customers.

When Bill asks the kids why they didn’t write, they note that they didn’t receive any letters. Chagrined, Bill and French realize that they spent so much time worrying that they forgot to write. 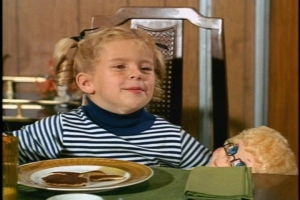 Everyone is happy to be back together. Now, bring on the breakfast.

Uncle Bill’s early excitement about sending the kids away is pretty funny, if uncharacteristic. So is the kids’ pre-camp bad behavior, which is so over the top that I don’t really blame Bill for jumping at the camp opportunity, despite the kids’ history of separation anxiety and abandonment fears. Well, I don’t blame him too much.

We also get an interesting peek into Uncle Bill’s social life. Apparently, Giles French has aided him in many seductions by preparing midnight suppers and playing music that each woman thinks of as “our song.” 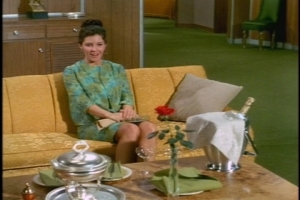 Each woman gushes about the details the French remembered. Bill fails to inform them that it’s a different French who’s setting the mood for romance now.

French has some enjoyably droll lines, such as, “Conversation ensues when one plants one’s person upon a park bench.”

In one scene, Bill and his date argue about the characterization of a child in the play they just saw. Bill feels that the seven-year-old character has been portrayed as excessively infantile. Coming from a Family Affair writer, this dialog is ironic.

Borden was in the cast of the 1978 miniseries Centennial, in which Brian Keith also appeared. She played Barbara Baxter in the final season of Hazel.