Welcome to this delayed edition of Family Affair Friday! I’ve emerged from my camping adventure unscathed, if unrested, and ready for another installment of Davis family fun.

As the show opens, the twins are getting on everyone’s nerves.

Jody makes one his anti-girl cracks, which Cissy doesn’t appreciate. She orders him to get lost. Meanwhile, doesn’t Mrs. Beasley look forlorn? Maybe she senses what’s coming next.

Jody leaves the girls’ room, but not before swiping Mrs. Beasley. Much running and screaming ensues. 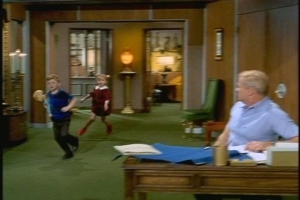 The chase is on.

The caper comes to a halt when the kids reach Uncle Bill’s desk, where they knock down his plans for “the longest bridge in Venezuela.” 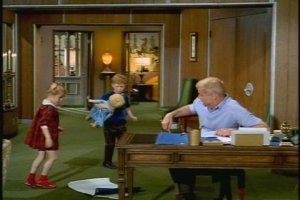 Mr. French has had it, so he lowers the boom: No TV for two nights.

And that includes Captain Hippopotamus. (The name of the twins’ favorite show is clearly based on Captain Kangaroo, but the show itself, as Buffy describes it, sounds more like an adventure serial.)

Almost immediately he begins to doubt his disciplinary actions–was he being too harsh? Nigel is definitely the sensitive French brother. Punishing Buffy and Jody was a favorite activity for Giles French.

The next day, French takes the twins with him as he purchases a wedding present for fellow butler Withers. In response to the kids’ questions, French explains why marriage is such a happy occasion. (French’s real feelings on the subject seem to be less positive, however–he fears Withers is giving up his career for “what may be a matrimonial disaster.”)

Could have been worse for Withers–French could have bought that hideous bird thing. (Note that the store walls are our favorite shade of green.)

The marriage conversation gives the twins a brainstorm–never a good thing. They are determined to find a Mrs. French! 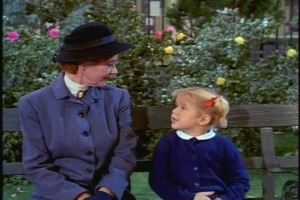 The twins try to play matchmaker between French and Miss Faversham. French, however, jumps to the conclusion that the twins want to replace him with Miss Faversham because he’s been too tough on them. 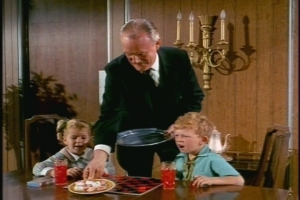 TV before homework and cookies and punch before dinner–yes, Jody, this is shocking.

Uncle Bill steps in and asks the kids why they don’t like French. Shocked, they reply that that they love him and that he’s their best friend besides Uncle Bill himself and Cissy. (Guess they’ve forgotten the other Mr. French–or the Frenches have merged in their childish brains.)

Soon, however, French catches the kids inspecting his room to see if Miss Faversham would like it.

Luckily, Cissy gets wind of their ideas and fills in Uncle Bill, who gets the whole scheme out of them. French is touched to hear how concerned the kids were about his happiness.

The three have a sweet talk about marriage, and Uncle Bill explains that each person must find happiness in his or her own way.

Interestingly, Uncle Bill also expresses his own determination to marry one day. Jody, on the other hand, is a budding confirmed bachelor.

The concluding talk is definitely the highlight of this episode. Structurally, the plot is unsatisfying, with an abrupt resolution.

Random observation: Uncle Bill was having a bit of a wardrobe malfunction with his tie here.

What would Giles French think of the kids’ attempt to fix Miss Faversham up with his brother? 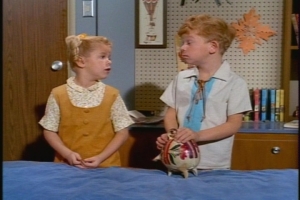 Random literary observation: Some of Jody’s books look like Hardy Boys and Nancy Drew volumes. Did boys read Nancy Drew in the ’60s?

This French has the same day off as his brother–Thursday. Nigel French mentions his brother in this episode. At least he remembers him.

Buffy, who could perform multiplication in the past, cannot subtract 6 from 15.

Jody: “How are we gonna get them married, Buffy? We can’t even get them to play checkers.”