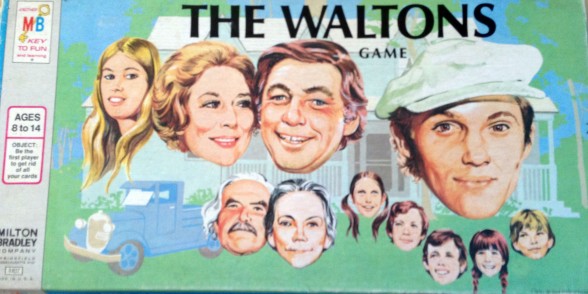 This week, my series on vintage board games is taking us to Walton’s Mountain.

The Game: The Waltons Game

Game Box: The colors are drab, which perhaps befits the Depression setting. The actor caricatures are good, as such things go. John Boy’s head is the biggest–frequent Waltons viewers will appreciate how fitting that is.

Object: “Be the first player to get rid of all your cards.”

Game Play: Like the H.R. Pufnstuf Game, this is a card game masquerading as a board game. All the cards are dealt at the beginning of the game; playing one card each turn, players try to complete puzzles featuring Waltons characters.

Game Board: The board, which features pictures of common Waltons settings, serves as a place to complete the puzzles. (The top puzzle, strangely, includes a non-regular cast member.)

An example of a completed puzzle. Anachronism alert: It’s very unlikely that a conservative 1930s farm wife would have had pierced ears.

My Thoughts: I’m surprised I didn’t own this game as a child because my family loved The Waltons. Watching the show together was a big weekly event, and it spawned a running joke that persists to this day. During the early seasons, the show’s end signaled my bedtime. My parents always tried to hustle me off to bed as the final scene faded to black, but I wasn’t having it. Didn’t Earl Hamner’s voice always announce, “Stay tuned for scenes from our next episode?” I would argue that I needed to see “the scenes.” My parents still bring this up when my own daughter is stalling at bedtime.

A John Boy card can be used to compete any puzzle. Of course it can.

Bonus Feature: Although we loved the show, my family also loved laughing at its corniness. I remember how amused we were by this Waltons parody on The Carol Burnett Show.  I don’t think we ever referred to the series as anything other than The Walnuts from then on. (The sketch more than lives up to my memories. Vincent Price and Joan Rivers as Ma and Pa Walton? Awesome!)