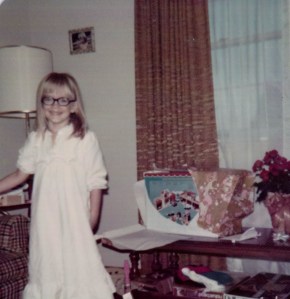 The gift I’d wished the hardest for in 1974–the Fisher Price Play Family Village.

My parents captured many Christmas morning photographs when I was young, but this one from 1974 is a little unusual. Most of our Christmas photos are candids taken in the midst of our present-opening frenzy. In this one, I’m pausing to pose in front of a half-unwrapped gift. The smile on my face shows how happy I was to uncover that gift–the Fisher Price Play Family Village.

Fisher Price began producing the Village in 1973. At age 6, I longed for it as intensely as I would long for the Barbie Star Traveler a few years later. I’d loved Play Family toys since I was a toddler, and the Village was the ultimate play set, with a fire station, police station, dentist’s office, apartment, restaurant, theater, garage, and more.

I’ve been wanting to acquire a Village for years, but finding a complete one at a price I was willing to pay proved difficult. Finally, about a month ago, I was able to add this toy to my collection.

I wanted to share a few pictures of it, simply because its colorful lithography and smiling people make me happy. As much as I enjoy nostalgia, I try not to fall into the trap of pining for a simpler time. In 1974, our country was dealing with Watergate, continued involvement in Vietnam, and an oil embargo–things were anything but simple. But a toy like Play Family Village transports me to a time when my parents still stood between me and the outside world’s troubles, and daily life seemed almost as uncomplicated as a walk down Play Family Main Street.

The gift I’d wished the hardest for in 1974–the Fisher Price Play Family Village.

This half of the village includes the fire station, dentist’s office, and theater.

The box–a little worse for wear after 40 years, but aren’t we all.

It must be hard to practice dentistry without hands.

Off to save a cat from a tree!

She’s smiling because he hasn’t given her the bill for her car repair yet.

Life isn’t entirely perfect in the Village–but when frowning ne’er-do-wells strike, smiling police officers throw them in the slammer.

This guy would never “go postal.”

Someone’s had her doughnuts this morning.

It must be hard to deliver mail that’s bigger than you are.

The “entrance” to the Village’s finest dining establishment.

The theater is featuring an animal act today.

8 thoughts on “It Takes a (Fisher Price Play Family) Village”