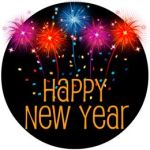 This is the first installment of a two-part New Year playlist. I’ll post the second part on New Year’s Day. Best wishes for a happy and healthy new year!

“The Happiest Person in the World”


Family Theater, January 8, 1948
“Everyone could be happy if they would think happiness into their lives.”
Story: Time is a newspaper, and City Editor Father Time has to break in a new reporter. He gives cub reporter 1948 an assignment to find the happiest person in the world—an assignment that teaches the new year about human nature.
Notable Performers: Life of Riley star William Bendix plays Father Time, while The Great Gildersleeve’s Walter Tetley plays baby 1948.
Referencing Radio: Bendix mentions his own show.
My Verdict: The performers make this entertaining, and the story keeps you guessing about the moral that it’s building to. Actually, it seems to me that the story fails to support the stated moral, which is quoted above. At one point, I thought they were making the point that happiness stems from giving, which made sense. For the characters in this episode, though, happiness stems from external validation, and you can’t just “think” that into being.

The Great Gildersleeve, December 24, 1944
“Be a good boy if you can, but have a good time.”
Story: Gildy rings in 1945 with Leila, but his Delores troubles aren’t over.
Musical Notes: Harold Peary sings a love song…but it’s a good episode anyway.
Interesting History: There’s a reference to 1943 as the year of penicillin and sulfonamide. Penicillin did come into widespread use around that time, but my brief research seems to indicate that sulfa was available earlier.
My Verdict: The jokes seem sharper in this episode than in many Gildersleeve offerings. I like Birdie’s comment when Gildy asks her about preparing an intimate supper: “I fix the supper, Mr. Gildersleeve. The rest is up to you.”
I must be a total nerd (big surprise!) because the lawyers’ club’s mock trial of the old year sounds fun to me. Unfortunately, my New Year’s Eve will be more like Peavy’s.
“Puckett’s New Year”

Gunsmoke, January 1, 1956
“A man’s gotta make a change once in a while, ain’t he?”
Story: Buffalo hunter Ira Puckett heads to Dodge to kill the man who left him to die in a blizzard. Matt, who doesn’t want to see the old man hang, intervenes.
My Verdict: A Gunsmoke rarity—an episode with no deaths! Puckett is an endearing character, and I like Matt’s efforts to keep him out of trouble. I feel bad for Kitty in this episode—her New Year’s reflections are sad, and Matt sure isn’t going to intervene to help her.

The Jack Benny Program, December 31, 1939
“What this world needs is a few less people who are making less people.”
Story: This episode follows Jack on New Year’s Eve, as he leaves the broadcast early. He’s in a funk because Gladys cancelled their date.
Interesting History: This episode tosses off many topical references. Jack mentions social security; President Roosevelt signed the Social Security Act in 1935, but monthly checks started going out in January 1940. “It can’t happen here” is a Phil punch line; it was also the title of a 1935 Sinclair Lewis novel about fascism. Mary mentions the movie Gone with the Wind, which had just premiered earlier in December.
Celebrity Name Droppings: Mary is attending Ginger Rogers’ New Year’s Eve party. Don is planning to take in Sally Rand’s show; you can do the same through the magic of Youtube.
Musical Notes: Dennis sings “All the Things You Are,” and I actually enjoy his performance, for a change.
Jell-o Hell No Recipe of the Week: Strawberry Jell-o combined with pineapple juice, egg whites, and crushed ice to create pineapple snow, a “foamy rose pink” dessert.
My Verdict: This episode’s unusual structure provides laughs for listeners, if not for poor Jack. Comic highlights are Gladys’ surprise appearance and Phil’s response to “In just a few hours the old year will pass right out.”

Our Miss Brooks, January 1, 1950
“Liberty? You can take shore leave!”
Story: Connie takes a job babysitting Mr. Conklin’s nephew on New Year’s Eve; she needs the money to attend a party with Mr. Boynton. Of course, things don’t work out the way she planned.
Celebrity Name Droppings: Famed lion tamer Clyde Beatty gets a mention.
My Verdict: Connie’s attempts to woo the clueless Mr. Boynton are always a hit with me. I love the record scene, in which they express their feelings through contrasting song titles.