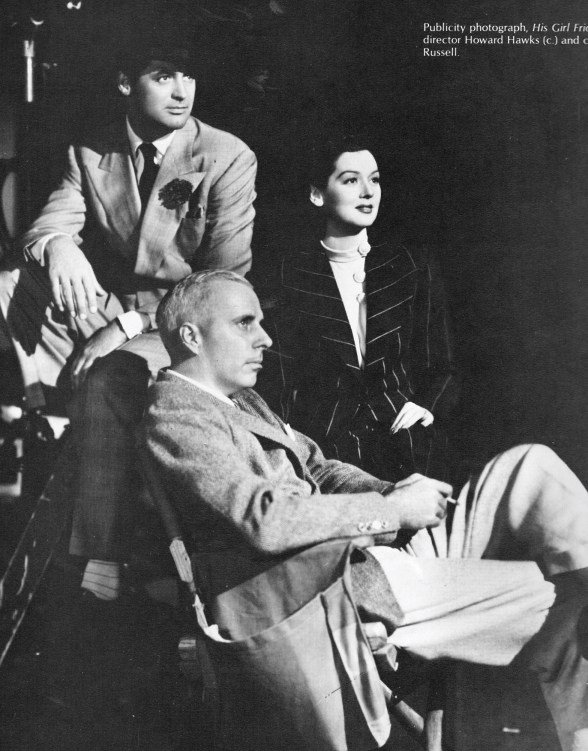 My husband balked at re-watching my favorite movie with me this weekend.

“How can you not love this?” I asked, a few minutes into the film.

“It’s just so much…talking!” he sputtered.

His Girl Friday is, indeed, all talk. Its characters talk so much, so quickly, that their words overlap, ringing out into a musical counterpoint.

Words attracted me to His Girl Friday the first time I encountered the movie, during my teenage years. As I flipped channels, this exchange captured my attention:

Walter: This other fellow–I’m sorry that I didn’t get a chance to see him. I’m more or less particular about whom my wife marries. Where is he?

Hildy: Oh, he”s right on the job, waiting for me out there.

Walter. Hmm…Do you mind if I meet him?

Hildy: Oh, no, Walter. It wouldn’t do any good, really.

Walter: Now, you’re not afraid are you?

Hildy: Afraid? Of course not!

Walter: Then, come on! Let’s see this paragon. Is he as good as you say?

Walter: Well, then, what does he want with you?

The Front Page, a 1928 Broadway hit written by Ben Hecht and Charles MacArthur, is His Girl Friday’s source. In the play, star reporter Hildy Johnson wants to escape the seedy world of journalism by marrying and finding “respectable” work. His managing editor, Walter Burns, thwarts him at every turn as the two collaborate on a bombshell story—a prison break by condemned murderer Earl Williams.

In His Girl Friday, Director Howard Hawks transforms Hildy Johnson into a woman, a change that raises the stakes considerably. Hildy’s choice between journalism and respectability is also a choice between a career and a traditional feminine role, and a choice between two very different men—her insurance-salesman fiancé Bruce Baldwin and her ex-husband, Walter Burns.

Two kinds of people populate His Girl Friday’s world. The journalists make up one group—a fast-talking, irreverent group. Walter Burns is this group’s apotheosis; nothing matters to him except the power and pleasure he derives from words. On the other hand, we have earnest people like Bruce; Earl Williams and his friend Molly Malloy; and prospective “city sealer” Joe Pettibone, who blows the lid off the mayor’s plan to execute a mentally ill man. These people speak slowly, mean what they say, and become lost in the journalists’ layered ironies and wise cracks.

In the end, though, Hildy can’t escape Walter and the lure of word craft. Words are weapons in their sparring, but also bind them in moments of shared delight that Bruce can’t comprehend. (Consider his delayed reaction, in the restaurant scene, when Hildy sees through Walter’s lies about another reporter. Bruce’s confusion produces contempt in Walter and embarrassment in Hildy.)

As James Walters wrote in the Journal of Film and Video:

“The film makes clear Hildy and Walter’s delight in controlling language, their near-delirium in playing together with the pace, tone, and rhythm of words. Their fluent use of language connects them with a world in which the ability to use words dictates a person’s status and in which, as in Molly’s case, an inability signals a person’s collapse…Indeed, there is a truthfulness in their shared vocal rhythms and patterns, as though their profound affinity emerges naturally and unavoidably whenever they are together.”

Choosing Walter’s world means giving up a lot, from little courtesies accorded to ladies, to society’s respect, to hopes of home and family and “a halfway-normal life.” For Hildy, however, giving up the mental exercise that Walter and writing provide would be a more bitter sacrifice.

His Girl Friday influenced my own choices, propelling me toward journalism school and a writing career. One day, in my college newspaper offices, the managing editor mentioned a Cary Grant movie she’d watched the night before.

“Have you ever seen His Girl Friday?” I asked.

Hildy became a heroine ahead of her time when she announced, “I’m no suburban bridge player. I’m a newspaper man.”

Final Fun Facts: Hawks pioneered the overlapping dialog style that distinguishes His Girl Friday, but Grant and Russell made

some delightful contributions to the script as well. Grant’s ad-libs include Walter’s description of Bruce as looking like “you know, that fellow in the movies…Ralph Bellamy.” Rosalind Russell, in her autobiography Life is a Banquet, described her secret hiring of a comedy writer to punch up the script. He added such bits as her murmured “slap happy” and her hand-signal-of-warning, both in the restaurant scene.

Note: His Girl Friday is available for streaming, free, at Hulu, and for free downloading and streaming at Internet Archive.