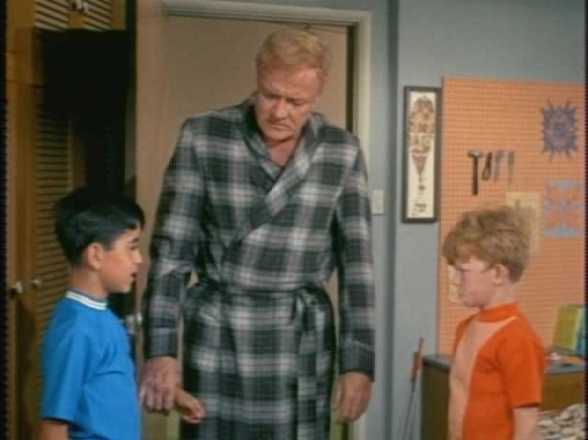 Written by: Austin and Irma Kalish. Directed by: Charles Barton.

French has just retrieved the Davis family mail and found a letter for Jody. 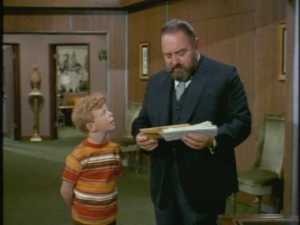 It’s from Bolivia, so Jody assumes it’s from Uncle Bill.

French thinks not, since it’s addressed to “Senor J. Davis.” Jody is excited to realize that it’s from his penpal Paco, the son of Bill’s Bolivian associate.

Jody tells French that the letter says Paco is having a nice time and the weather is good. 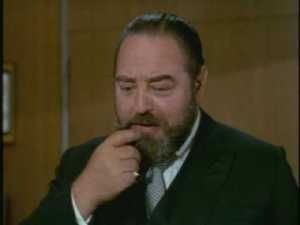 French wonders how the boys can communicate since Jody “has trouble enough reading English.” 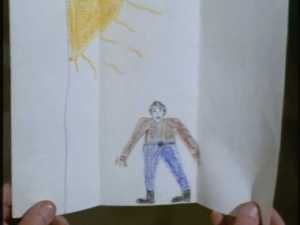 It turns out that they express themselves through pictures.

Jody hurries off to his room and starts to answer Paco’s letter right away.

While he’s drawing, Buffy comes in to borrow a red crayon. It seems Mrs. Beasley is going on a date and needs some lipstick.

Jody can’t spare the red crayon–it’s a crucial part of his “reply” to Paco.

Like Paco’s picture, Jody’s is also meant to convey that he’s having a nice time and the weather is good.

In our next scene, an excited Paco has received Jody’s letter and is showing it to his father and Bill.

“That’s Jody all right,” Bill says, adding wistfully, “at least as far as I can remember.”

His Bolivian project has apparently been a long one, but he is preparing to go home the next day. Paco and his father are staying another day and then flying to Paris.

When Senor Mendez laments the fact that the two pen pals won’t get a chance to meet, Bill has a brainstorm: He can take Paco home with him, and Senor Mendez can pick him up in New York on the way to Paris.

(Can you imagine what a nightmare it would be to make these complicated travel arrangements? Luckily, that’s never a problem in the Davis universe.) 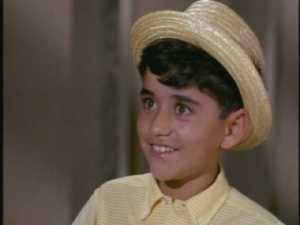 Paco is thrilled by the opportunity to meet Jody and quickly agrees.

Bill only tells the family that he’s bringing home a surprise, so they are indeed to surprised to find what Jody calls “a living surprise” at their door. 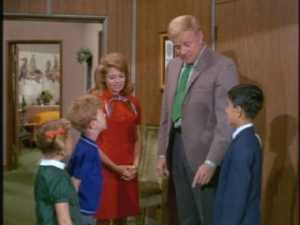 Bill explains introduces Paco to the kids and tells them that their guest doesn’t speak any English.

Fortunately, Bill is fairly fluent in Spanish, as we remember from the “Lost in Spain” episodes.

The writers don’t seem to remember those episodes, though. 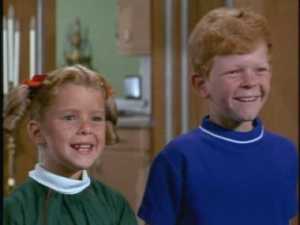 The twins, who spent weeks studying the language in Spain, can’t speak a single world of it.

Cissy credits her scant knowledge of Spanish to her school classes, without mentioning her experiences abroad.

And French can now speak at least a little Spanish, though the whole “Lost in Spain” plot hinged on his inability to do so.

Things get off to a good start between Paco and Jody. 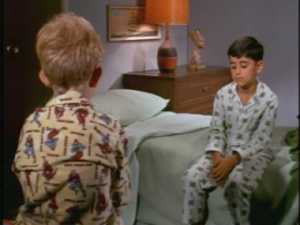 By bedtime, though, an awkward silence has settled in.

Bill looks in on the boys and asks Jody if they are having trouble communicating.

At Bill’s suggestion, Jody tries to tell Paco about his turtle. 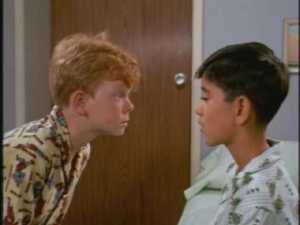 “No, his name is Dinky,” a frustrated Jody replies.

They do manage to share a nice moment right before going to bed. 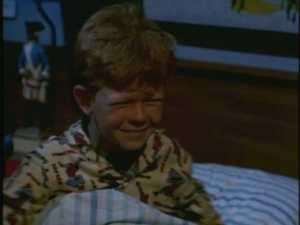 The next morning, Jody wants to make up for lost time and do some bonding with Uncle Bill.

They start to catch up, although Jody warns Bill that he probably doesn’t want to hear about Jody’s spelling grades.

When Paco comes in and starts talking with Bill in Spanish, Jody’s mood turns glum. 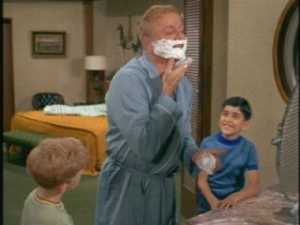 He feels left out as Bill laughs at Paco’s amusing observations.

For example, Paco notes that Mr. French doesn’t shave. He also says that the bridges Bill builds, though not as tall as New York skyscrapers, would seem tall to a fish.

Jody gets tired of having the jokes translated for him and leaves the room.

Later, Cissy takes the three kids to the park.

Jody is still acting petulant and complains that Paco won’t know how to play their games.

“All kids play the same games,” Cissy asserts confidently–and, as we shall see, wrongly. 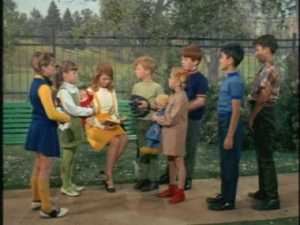 Paco’s an interesting novelty to the twins’ friends, who soon gather around.

One girl is excited to learn that he’s from South America–“farther away than New Jersey, even.” Meanwhile, Jody and his friend Peter have this conversation.

I think Jody might have a future in Republican politics.

The kids get even more interested when Paco displays a toy he brought from home.

Peter wants to play with it, though Jody tries to drag him away.

Cissy says the toy was an invention of the Incas. 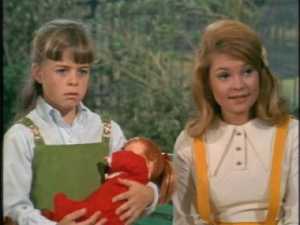 Bess Lindstrom, here, interprets that as “inkers.” She was much smarter on The Mary Tyler Moore Show.

Jody, refusing to even try it, says, “Who wants to play with an old toy from the inkers?” 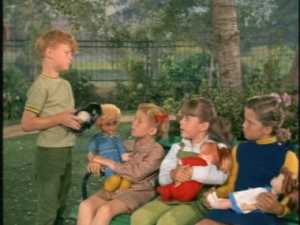 With nothing else to do, he tries to interest Buffy and her friends in a game of baseball.

When they say they have to take care of their dolls, Jody suggests using the dolls as bases.

Sensing that her brother is stressed, Buffy pulls him aside and reminds him that Paco’s father is coming to get him that very evening.

Back at home, he is only too happy to help Paco pack.

Don’t get too excited, Jody. Paco’s dad has just called Bill to explain that he will be delayed.

Senor Mendez tells Bill to send Paco back to Bolivia, but Bill won’t hear of it–four children is no more trouble than three, so he will be happy to have Paco stay on.

Paco isn’t happy about this news. Talking to his father, his face goes from this…

And, of course, Jody isn’t happy either when he hears Paco is staying. 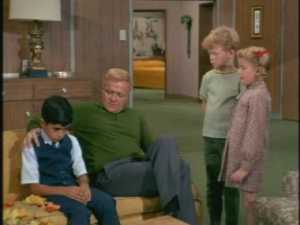 “For how many days?” he asks his uncle.

That’s a good question and, strangely, one that Bill didn’t ask Paco’s father when they were talking on the phone. Nevertheless, Bill says it might be a week. 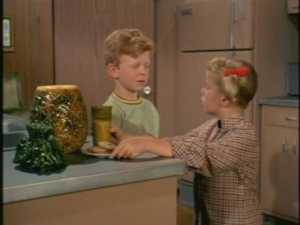 Later, while the twins are getting a snack, Buffy pledges her loyalty to a downhearted Jody.

They have to stick together, Jody agrees, adding “Brother and sister can’t come apart.”

But when Buffy takes cookies to Paco and finds him crying, she can’t help trying to cheer him up.

She introduces him to baseball–or at least playing catch.

Paco catches on quickly and begins to enjoy himself.

But when Jody sees this happy scene, he feels betrayed. 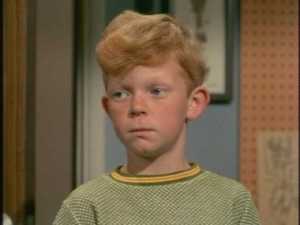 She explains that she had to be nice to Paco because he was crying. Jody is unsympathetic.

(It’s too bad Free to Be You and Me won’t come out for another three years. Both Jody and French need to hear this Rosey Grier song.)

Later, Jody is on the terrace feeding Dinky (or Senor Dinky, as Paco calls him–I love that!) 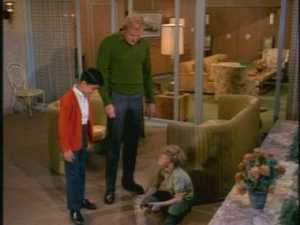 Uncle Bill stops by with Paco and offers to take both boys out for ice cream.

This is how upset Jody is: He turns down ice cream…because he needs to practice his spelling.

As Bill and Paco walk away and Paco calls, “Adios,” Jody mutters, “Adios, yourself.”

Then, he nuzzles Dinky. Eww!

The next morning, Bill is exulting about the way the kids are getting along. 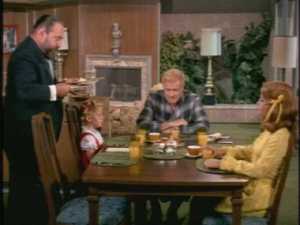 There’s an international language of children, French agrees. They understand each other instinctively.

At that moment, though, Paco and Jody are actually coming to blows. 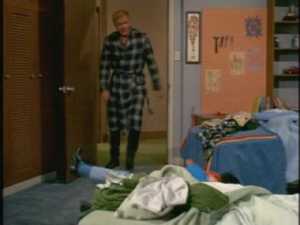 Hearing the noise, Bill rushes in to break up the fight.

He speaks privately with Jody, who vents about how Paco has been getting all the attention. Having another boy around means no one cares about him, he pouts.

Bill chides him for feeling sorry for himself and asks him what he would do if he was in Bolivia with Paco’s family.

Based on his recent experiences, Jody says that he’d tell Paco’s family to pay lots of attention to Paco.

Using what I hope is reverse psychology, Bill offers to send Paco home right away.

If it was reverse psychology, it works beautifully. “I don’t want him to feel not wanted. It’s a terrible feeling,” Jody says in a nice, subtle callback to the Davis kids’ traumatic experiences.

Bill orders Jody to say he’s sorry about their fight. Jody says he really is sorry about it…Paco was winning. 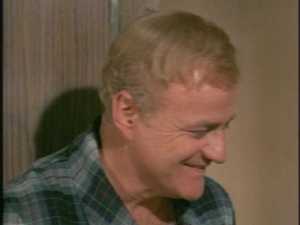 By the time Paco’s father does come to collect his son, the boys are getting along fine. 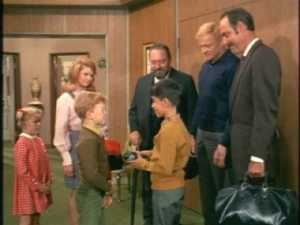 Jody calls Paco his amigo, and Paco calls Jody his friend. They even exchange gifts.

Jody doesn’t want Paco to leave. Senor Mendez encourages the Davises to visit them in Bolivia someday. (When Buffy asks Bill if they really can go to Bolivia, he gives one of those “Oh, maybe,” responses that are parent speak for “Don’t hold your breath.”)

Even after Paco leaves, his influence lingers–Jody ends the episode by calling his uncle “Tio Bill.”

They really should have aired this episode before the “Lost in Spain” three-parter to avoid inconsistencies about the family’s Spanish fluency.

Jody’s behavior is terrible in this episode, but it’s kind of fun to watch since it is so different from his usual unselfish demeanor. He always has taken a special pride in his father-son connection with Bill, so it makes sense that having another boy around would make him feel threatened.