We start this episode with a brief review of previous events, which culminate with Buffy and Jody alone on a bus in Spain. 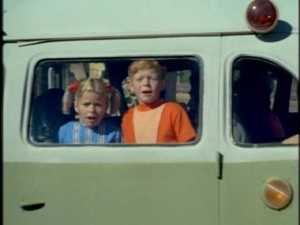 Mr. French is desperately trying to explain the situation to a woman at the bus station, but the language barrier interferes. 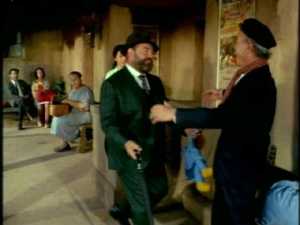 He’s relieved to see a familiar face, Tio Dichoso, but he realizes once again that Tio Dichoso’s grasp of English is quite limited.

Meanwhile, when the bus stops to admit a passenger, Buffy and Jody try to get assistance from the driver.

He can’t speak their language, but his irritation comes through loud and clear.

The dejected twins return to their seat.

This shot features some nice shaky camera work, which conveys both the motion of the bus and helplessness the kids feel. 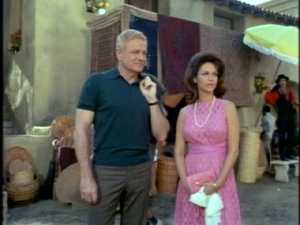 Blissfully unaware of all that is happening, Bill is enjoying a Sunday afternoon with his Spanish senorita, Ana.

She’s taken him to her favorite place in Barcelona, a market area where gypsies recite sappy love poetry.

Bill’s Spanish comprehension is impressive–he can correctly translate such words as “murmur” and “flame.”

He says the poem–which ends with, “Love is a tear”–is very said.

Cissy’s also off having fun with a new love interest.

She’s excited to see that this youth hangout is just like ones at home.

Ricardo sees some friends but declines to join them, even though Cissy says talking with his friends would help her improve her Spanish.

Of course, talking with his friends would also probably reveal the secret Ricardo has been keeping.

When the twins’ bus reaches Sitges, they disembark.

The driver demands their tickets and can’t understand their explanation that Mr. French has them.

Instead of showing any concern for these kids, who are alone and clearly out of place, the angry driver stalks off.

Back in the marketplace, Bill is buying flowers for the “senorita hermosa.”

The flower seller wishes him good luck. When Ana translates the sentiment, Bill says he understood it.

Come on, Ana, he knows “murmur” and “flame”–don’t patronize him!

In the cafe, Ricardo is introducing Cissy to churros, which she soon realizes are similar to doughnuts.

Ricardo says dunking them is mandatory–“a king set the fashion.”

I’ve read several articles on the history of churros and haven’t come upon a reference to this. Can anyone shed any light? 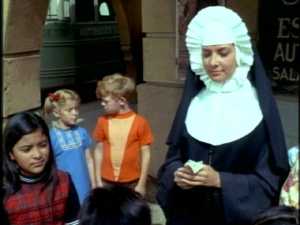 Meanwhile, Buffy and Jody see a nun with a friendly face and hope that she can help them.

She’s apparently supervising a school trip, and Buffy and Jody get swept up with the other children. Soon they are on another bus.

Realizing that the nun doesn’t speak English, Buffy says they’d better get off the before it takes them someplace else.

“It looks like we’re already someplace else,” Jody sighs. 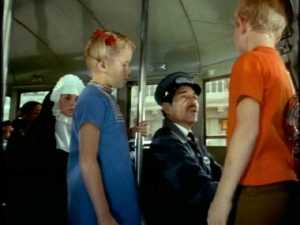 When they try to get off, the uncomprehending bus driver orders them to their seats.

Back in San Juan, French is relieved when Tio Dichoso’s bilingual friend arrives.

The interpreter calls the Sitges station and learns the twins’ bus is there.

The driver remembers the kids, but when he and the station manager look for them, they come up empty-handed.

The belongings they left on the bus are the only trace of Buffy and Jody.

The translator breaks this alarming news to French, who insists on going to search for them himself.

“Don’t you understand?” he cries. “The children were in my charge. Mr. Davis entrusted me with their care.”

It will be three hours before another bus leaves for Sitges, so the translator offers to drive French.

When we next see Buffy and Jody, some time has passed. 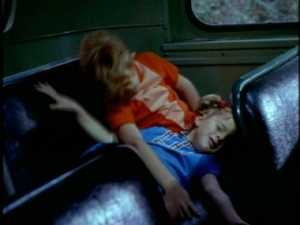 It’s growing dark, and they have fallen asleep.

When they wake up, the driver has stepped away from the bus and left them alone.

Having no idea where they are, the twins get off the bus and look for help.

They try knocking on the door of a nearby building but don’t get an answer.

“I don’t like this place,” a nervous Buffy tells her brother. “It’s too, too…you know?”

The twins decide to walk on.

I guess no one ever told them that when you’re lost it’s better to stay in one place. 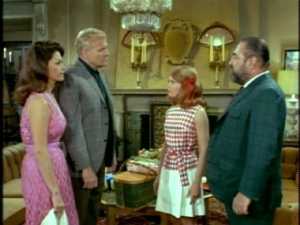 Back in Barcelona, Bill and Ana return from their date to find Cissy and French looking grim.

Cissy breaks the news that the twins are lost, and Bill is alarmed to learn that it’s been nine hours since the Sitges bus took them away.

A fearful and remorseful French says these have been the worst nine hours of his life.

He adds that the area around the Sitges station has been searched thoroughly.

(This scene is confusing. French does not mention that he went to Sitges himself to look for the kids. He must have done so, though, because he now has the picnic basket they left on the bus.)

A shaken Bill decides that they should notify the Barcelona police, and Ana makes the call for him.

As night falls, Buffy and Jody are getting tired, hungry, and even more scared.

When they come upon a church, they hope that perhaps a minister is inside.

Jody rings a bell, but no one answers.

The twins decide to enter the church anyway. 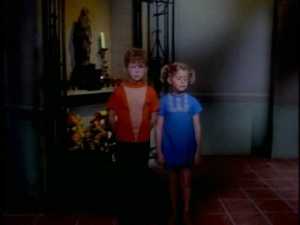 Looking around, they see no one at first.

Then they see something that terrifies them…

I don’t blame them–I’d be scared, too.

As the figure comes closer, their eyes grow wider.

Then they take off running at quite a clip.

Eventually, they stop and determine that “it” isn’t following them. When Buffy asks what “it” is, Jody says he thinks it’s “something there aren’t any of.” 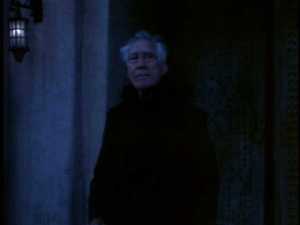 Unfortunately, they miss seeing that the apparition is just a man, who might have been able to help them.

Meanwhile, an officer from the Barcelona police has shown up at Bill’s place.

On the plus side, this guy can speak English. On the minus side, he’s really annoying.

He discourages Bill from going to look for the kids, saying that he should leave the matter to professionals.

He cheerfully notes that lost children are not uncommon, and that a family in the countryside is probably caring for the kids and keeping them safe.

Bill tries to emphasize the situation’s urgency–these kids are only seven years old and can’t speak the language.

Geez, they’re still seven? They were six two and half years ago!

Never has Bill had better cause for one of his head rubs.

In the countryside, Buffy and Jody’s travels bring them to a farm.

In an awkward bit of dialog, Jody recognizes a structure as a barn because he has seen a picture of one in his geography book.

Looking inside, they discover that the barn has an occupant. 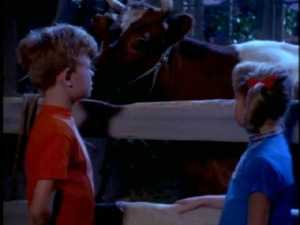 Buffy wonders if cows hurt people, but Jody tells her she is thinking of bulls. 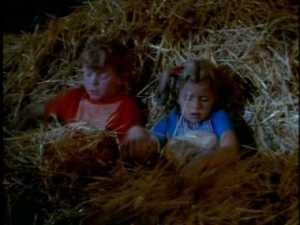 Jody finds a place for them to sleep and tries to reassure his sister that the barn probably only seems spooky at night.

They are both sure that Uncle Bill will find them in the morning.

They day’s events have left them wary enough that they hide themselves under the hay before going to sleep.

When dawn breaks, the farmer’s wife enters the barn to milk the cow.

She doesn’t notice the kids, who get up as soon as she leaves.

Hungry and thirsty, they hope to get milk from the cow, but Jody doesn’t know ‘how to turn it on.”

When they hear someone coming, the twins scurry back to their hiding place.

It’s the farmer, who only stays for a minute.

When he leaves, it becomes clear that Buffy is at the end of her rope.

Sobbing, she wonders what will happen if Bill never finds them.

As the episode closes, Jody tries to comfort his sister.

I’ll offer commentary on this whole three-parter when I blog about Part 3. Look for that installment on Tuesday!

Whew–that’s a big cast. Most of these performers made their livings playing Hispanic bit parts in movies and television, especially in Westerns.

Ruben Moreno’s most visible film role was as Dustin Hoffman’s father in Little Big Man. He worked as a director and screenwriter as well an actor and is especially well remembered as an acting coach. A former student has set up a Facebook tribute page. Some sources say Moreno was a two-time Academy Award nominee, but I am unable to verify that in the official Academy Award database.

Lenore Stevens was once married to actor Richard Mulligan.