When we look in on the third season of Family Affair, French is bringing everyone “to-mah-to” juice, and Cissy is looking like the cat who at the canary.

On second thought, she’s looking more like the canary.

She’s just gotten her hair styled at the beauty parlor. Seeing Cissy’s results inexplicably inspires Buffy’s desire to go to the beauty parlor, too. When Bill says she’s too young, she asks why Jody gets to visit the barber by himself.

Yep, it’s because she’s a girl. Bill admits it’s not fair, but he sticks to his decision.(Someone must cut Buffy’s hair, though. I guess that’s another job French gets stuck with.)

The next day at school, Buffy is still pining for greater independence when she meets Lana. a new girl in class. We quickly find out that Lana comes from a different social sphere than the Davis kids.

She has a single mother who used to be a maid and now works as a manicurist. She also wears a key around her neck, to let herself in her apartment after school.

(As an aside, Buffy’s sandwich is meat on whole wheat. Ew. At least it’s better than meat on white, I guess.) 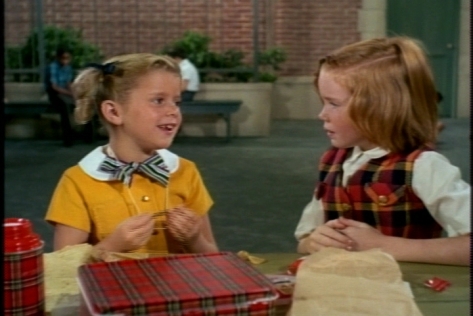 The key fascinates Buffy, who sees it as a shiny symbol of freedom. She even gets Lana’s permission to wear it for the rest of the day.

That night, Buffy asks Bill if she can have a key to the Davis apartment. When he says she’s too young, she complains about being treated like a baby at age 7. (Wow these kids are aging slowly.)

She again asks why Jody gets more freedom; apparently, he gets to stay at the playground by himself after school while Buffy goes home with French.  Bill says little girls need more protection. 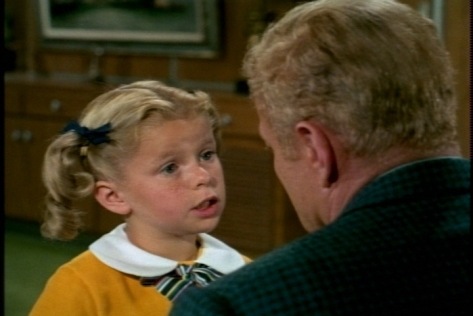 Sure, Uncle Bill. Bad things never happen to little boys who wander around the city alone.

Buffy also wants to change her name. Lana has started calling her Ava, an alternate name Lana’s movie-fan mother considered for Lana. (Note to the IMDb: Ava is NOT Buffy’s real name.) 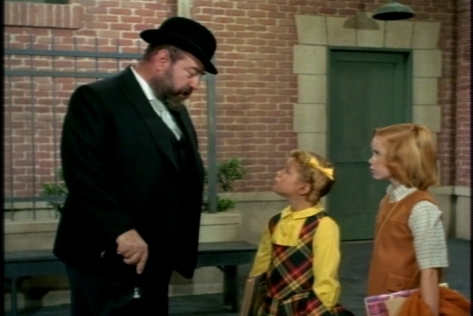 The next day, Buffy and Lana are walking out of school together when French arrives to pick Buffy up.

In an amusing exchange, Lana wonders why French dresses so funny, and Buffy explains that he’s English.

Lana’s slum is on the way the home, so French invites her to walk with them.

Buffy congratulates Lana for having “her own TV,” which is weird since it’s in the living room. Maybe she’s just trying to be polite. Lana wants Buffy to come over after school the next day, and French says he’ll ask Mr. Davis.

At home, of course, French is all hell-to-the-no.

She has little supervision and is “hardly a suitable companion for a young gentlewoman,” he says, going so far as to call Lana “a street urchin.” Now, I don’t like French’s snobbery, but I wouldn’t let my 7-year-old go over to her house without at least getting to know her mother and making sure a responsible adult would be present at all times.

Bill, though, says sure. I guess little girls don’t need that much protection.

French and Jody drop the girls off in Lana’s mom-less apartment the next afternoon.

Lana’s mother does make a brief appearance, stopping at home after work to dress for a date. 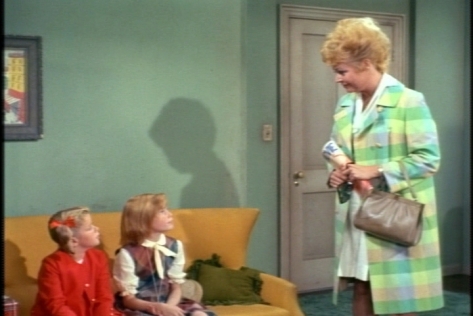 The girls have to shop for and prepare their own dinner.

They choose frozen pizza and soda, which seems pretty realistic.

They play dress up in Lana’s mom’s shoes, and Lana does “Ava’s” hair. 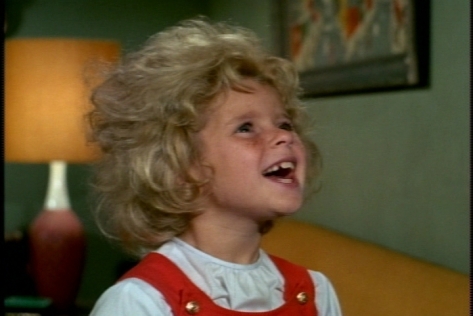 The resulting hair-do is the visual highlight of this episode. Buffy looks like she wandered away from the Grand Ol3 Opry.

When Bill comes to retrieve Buffy, he finally groks to the fact that Lana is home alone. When she asks if she can have a sleepover with Buffy the next night, he agrees. 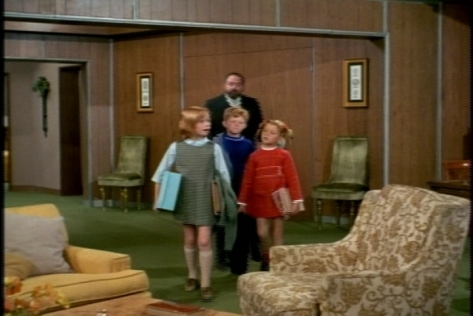 She’s also taken aback by the many rule French lays down: Homework before fun, playing instead of watching the afternoon movie, no running in the house. 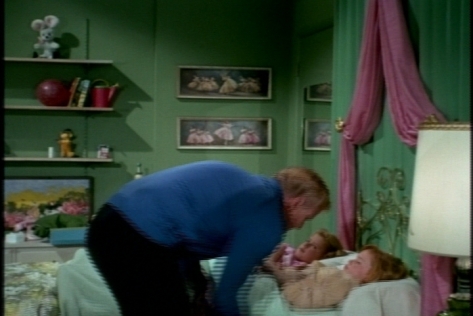 At bed time, she allows Bill to tuck her in, pretending that it’s another house rule, when it’s clear that she just wants the adult attention.

When Buffy takes Lana home the next day, Lana breaks down. 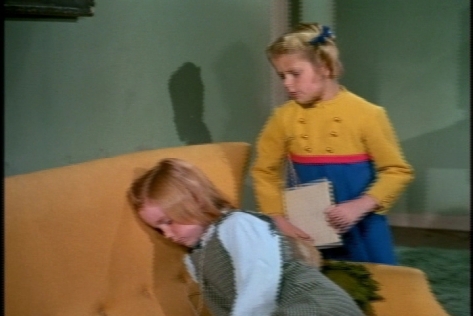 Laying it right out there, Buffy asks if she is crying because she lives where she does instead where Buffy lives.

Lana says it’s not that–it’s because Buffy has so many people to “boss her around.” Lana’s all-too-aware that freedom can spring from a lack of caring. Buffy tells her that when she feels like being bossed around, she should call on the Davises.

Soon, Lana is doing just that. For example, she phones French to see if she can watch a horror movie on TV. His reply: “Certainly not!”

And Buffy’s learned to accept her family’s rules without chafing, so I guess all’s well that ends well. Somehow,  I still feel sad, though.

I thought the “latch-key” phenomenon dated from the 1970s, but the term originated during World War II. I personally loved having a key and letting myself in at home, but it didn’t happen until I was about 10, and I wasn’t left alone for hours. I’m of two minds about whether the Davis family should have done more to improve Lana’s sad situation. On the one hand, a scene with Bill talking to Lana’s mother about the problem might have been hard to take. Bill keeps himself busy with work and dating, so the only real difference between him and Lana’s mom is the ability to pay for high quality child care. On the other hand, Lana seems to be suffering from some pretty serious neglect. I’ll be interested in hearing what other Family Affair fans think.

The gender-based treatment of Buffy and Jody is a new thing. In the past, the twins’ level of freedom has varied dramatically from episode to episode, but it has always applied equally to both kids. 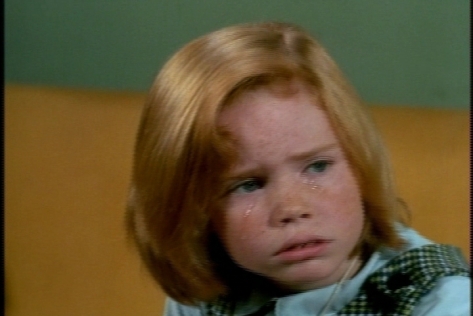 Neher appeared previously on Family Affair under the name Susan Benjamin. From 1969 to 1971, she had a regular role in another Don Fedderson single-dad series, To Rome with Love. A commenter directed me to this segment of the pilot that’s available on Youtube–check it out!