Buffy and Jody, rushing into the apartment after school, find a surprise–Uncle Bill, who’s taken the afternoon off.

Jody tells his uncle that he’s purchased a Venus flytrap seed from a classmate. 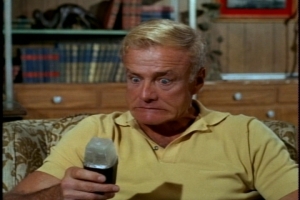 Uncle Bill’s reaction to this news is priceless.

Buffy explains that she contributed to the purchase, although she prefers plants that just sit around looking pretty, rather than chowing down on things. 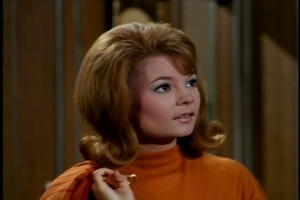 As this conversation winds down, a gloomy-looking Cissy enters the apartment.

She perks up when the phone rings, but it turns out to be a call for Buffy. A classmate named Leonard has been calling Buffy and breathing into the phone instead of talking.

Heavy-breathing phone calls in second grade? Leonard has a creepy future ahead of him, I think.

When Uncle Bill asks Cissy what’s bothering her, she makes the surprising claim that nobody likes her. 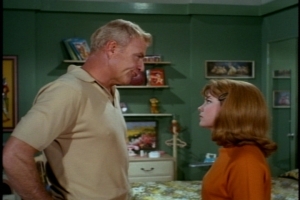 Bill pooh-poohs her concerns, but Cissy insists that boys don’t notice her.

Her best friends Trish and Laura have better luck, she says. Trish has three older brothers and can talk about sports knowledgeably. And Laura’s secret? She’s pretty, Cissy says. (I bet Trish would really enjoy hearing this conversation. I also wonder why Sharon doesn’t rate as one of Cissy’s BFFs.)

The only boy who notices Cissy is Wendell, a boy nobody notices.

Bill suggests that Cissy invite a few classmates over for a get-together soon, so she can get to know some boys in a relaxed environment.

Cissy is anything but relaxed on the day of her party, though.

(Those paper cups are cute, although I’m surprised French would put out paper cups.)

As it turns out, Wendell is her only guest. They have an awkward conversation about books. Wendell carries books around with him to read on the way to school, between classes–and at boring parties.

Cissy may not care for Wendell, but his reading habits have totally won me over.

When Cissy wonders aloud where the other boys are, Wendell suggests that they may have come down with same virus that “Trish and Gail” have.

(The actress who plays Laura on this episode has previously appeared as a character named Gail.) 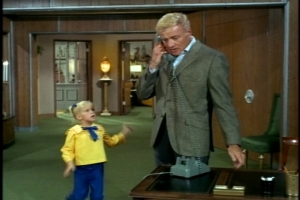 When Bill returns later, he find the phone off the hook, with Leonard breathing into it.

Cissy’s feeling sorry for herself, and she’s not buying Bill’s assurances that she’s smart, good-looking, and mature.

He decides that they should call in experts to help solve Cissy’s problem.

Thus we have the obligatory teenage-girl-with-a-book-on-her-head scene.

This modeling expert advises Cissy to refrain from smiling 99 percent of the time–this will make her rare smiles “an event.” Yes, everyone knows that a sullen look is a guy-magnet. (While I think her advice sucks, I do like the modeling expert’s outfit.)

The other experts behind Exteme Makeover: Cissy Edition include: 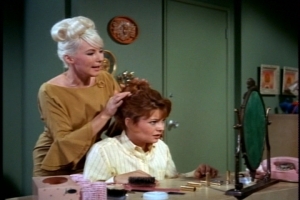 A hairdresser who tells Cissy to change her style as often as her moods shift.

A drama coach who supplies Cissy with affected quips and insincere compliments to tongue-tied boys about their “strong, silent” ways. 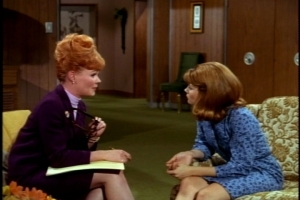 And a psychologist who advises Cissy to avoid associating with attractive girls–even if they happen to be her friends!

His final helper is a fashion expert, as you can tell from her hat.

She rejects a drab outfit that only an uncle could love on Cissy.

Unfortunately, she also rejects this outfit. 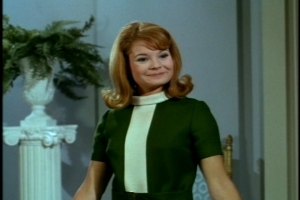 In fact, I think she’s worn this before, although I’m too lazy to go back and check.

When Cissy debuts her new look for school the next day, she makes a big impression on the twins, who think she looks like a princess.

Personally, I find her “sultry look” almost as disturbing as Leonard’s breathing. 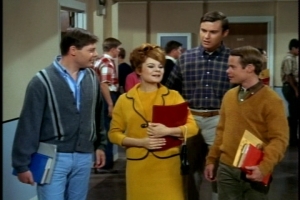 It’s a little hard to understand how, amid late 1960s youth culture, these boys find the middle-aged-business-woman look so captivating.

Wendell isn’t captivated, of course–he’s all “I don’t even know you anymore!”

Wendell’s reaction bothers Cissy, which is also hard to understand, since she never seemed to like him in the first place. She also grows weary of keeping up the sophisticated repartee.

Back at home, Jody gets a shock when he realizes he’s been scammed–his Venus flytrap is really an onion.

The next day, Cissy goes back to her old look.

She’s tired of trying to keep up the Venus flytrap front when she’s really an onion, she explains. Bill denies that she’s an onion, but he’s relieved that she’s back to normal.

Buffy’s relieved when Bill assures she won’t have to go through the expert makeover process when she’s older. 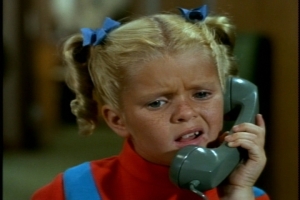 As she notes, she’s already got enough trouble with Leonard–he’s progressed from breathing to hiccups.

What a weird episode. Maybe it would have worked better early in the first season, when Cissy could have felt insecure about fitting in with city kids. By this point in the second season, we’ve seen her have as much success with boys as any 16-year-old really needs to have. If this episode had aired earlier, it might have also helped to explain Bill’s unfamiliarity with helpful parenting phrases such as “Be yourself” and “Your real friends will like you for who you are.”

One plus for this episode–during the drama coach scene, French gets to play a teenage boy and utter such words as “groovy.”

I love the opening sentence of Herbert’s IMDb bio: “Charles Herbert was a mildly popular 1950s child actor with a trademark sulky puss and thick, furrowed eyebrows, who was known for his inquisitive kid besieged by alien beings, including a robot, human fly and several house-haunting ghosts.”

He appeared in such movies as Houseboat, The Fly, 13 Ghosts, and Please Don’t Eat the Daisies.

Aubry, Borden, Lea, and Mountford are all Family Affair veterans. As noted, Mountford had appeared twice as Gail, so it’s strange that her name is Laura here. Even more strangely, she will appear as Sharon in an upcoming season-two episode and will later appear as a character named Anita.

Oaky Miller now goes by the name Chuck Harris and works as a personal manager.