For this week’s game, we return to the more innocent 1970s, when kids had no access to violent video games–just violent board games like this.

Based Upon: The TV show S.W.A.T., which revolved around a police “special weapons and tactics” unit. Although its run barely exceeded a year*, the show spawned a number one hit song and a 2003 movie.

Game Box: The box features scenes from the TV show. Oddly, though, the box doesn’t mention that the game is based on a show. Maybe Milton Bradley hoped the game would have a shelf life that transcended the program’s run. Gun Count: 6.

Game Board: The board includes more photos from the show, plus a colorful logo and some cartoony urban settings, including a diner, a construction site, and a park. Gun count: 8.

A closer look at part of the board

Object: Be the first S.W.A.T. team to capture the culprit.

Game Pieces: Each player gets a truck and two matching cardboard pawns. The pawns can ride in the truck–sweet.

An all-plastic pawn is supposed to be the culprit, but my game doesn’t seem to include one. The previous owner did include some other random pawns in the box, including some castle-shaped plastic pieces that bear drawings of beefeater types. 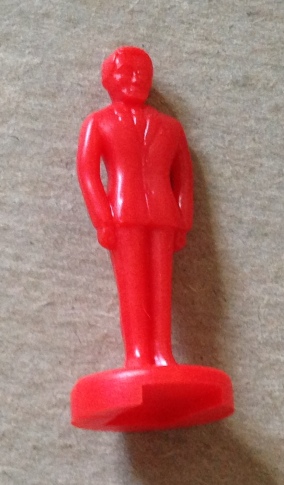 I guess this guy could be the culprit, but he looks quite trustworthy.

Game Play: A spin of the wheel determines which numbered space the culprit will occupy. Each player rolls two dice–marked with the numerals 1, 2, and 3–and directs his truck around the track. Certain spaces provide entry to the board’s middle footpaths. When he lands on one of these spaces, a player can remove his team members from the truck. On his next turn, he rolls both dice and moves each of his team members by the count of one die. He captures the culprit by landing both his pawns on the red dot near the culprit’s hideout. To complicate things, the culprit changes hideouts after each game round.

Planet of the Apes