“Trouble with you thinker types is you are always so SURE people will act the way you think they should logically act. I gather you aren’t really in favor of teen-age hanky-panky, but you believe the boy must exercise as much restraint as the girl. I agree: This would be just peachy keeno, but life isn’t like that. Males are the conquerors and females, the limit setters. I doubt you moderns can ever eliminate this double standard, and if you do, Heaven help the men! When they are no longer the aggressors, they may become slaves, for many women won’t stop at ‘equality.’” 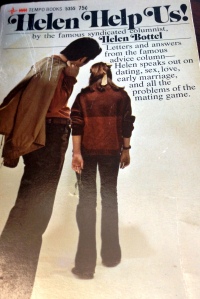 This girl NEEDS help. A creepy guy is following her around and staring at her. (I think he’s trying to figure out her hairstyle.)

About this Book and Its Author: If mid-century advice columnists were colas, Abby and Ann would be Coke and Pepsi. Helen Bottel? She was RC. Her syndicated column, “Helen Help Us,” ran for 25 years in about 200 papers that were apparently too cheap to spring for one of the bigger names.

Bottel entered the advice game on a dare from husband and began writing a column in her local Oregon paper in 1958. Not lacking chutzpah, Bottel sent her work to King Features Syndicate within three weeks of starting her column. Remarkably, they snapped her up.

Her column wasn’t specifically aimed at teens, but she acknowledged that they were her most frequent correspondents. In this 1970 collection, the letters are exclusively from teens and young adults, and Bottel concerns herself mainly with helping them resist the society’s growing sexual licentiousness. Judging from the letters, it’s an uphill battle; most of them seem to be from girls who “gave in” and regretted it.

Actually, the letters are weirder than most of the advice Bottel gives, and the predicaments the writers find themselves in disabuse one of the notion that they date from a more innocent time. Correspondents include a 16-year-old who’s seeking a divorce from her abusive husband; a high school girl who’s dating an alcoholic 13 years older than she; a girl whose 15-year-old friend “ran away to be with the hippies” and ended up pregnant and with a case of VD; and a 19-year-old guy who’s attracted to a 14-year-old girl (“I’m not going to tell you she is mature in looks and mind because she isn’t, but I feel she has the basic personality traits I look for in a girl.”)

Bottel’s own background was troubled, according to a 1986 People magazine article. Her father deserted the family when she was two, and her mentally ill mother died when Bottel was 15. A caring foster mother put her on the road toward success.

She sometimes used the slangy, quip-heavy style that Ann and Abby relied upon in their early years. Generally, she seemed sincere in her efforts to help, however. All those who wrote in—more than 3,500 per year–received a personal response in the mail.

She gave up her column in 1983, explaining, “I was tired of being the third person in a two-person market.” At around the same time, she attracted the attention of the Japanese newspaper Yomiuri Shimbun, which gave her a fresh outlet for her advice and whose readers relished her American perspective.

A Note About My Edition: This 75-cent Tempo paperback wasn’t bound with great care. From page 56, it skips to page 89. Then, after page 114, it goes back to page 89 and starts from there again. I’m missing 33 pages of potentially weird wisdom!

Extreme Weirdness Alert: Bottel’s book includes a bizarre letter from a girl who befriended a male TV star’s daughter. When the girls returned home 15 minutes past curfew due to a flat tire, the TV star was angry and got into an argument with the letter-writer, who ended up throwing a hairbrush at him. He, then, took the hairbrush and gave her “a real hard spanking.” This letter doesn’t entirely ring true, unless the TV star was Pat Boone.

Quotes from Helen Help Us

“You can’t turn a boy on and expect him not to catch on fire.”

“With immaturity, poverty, jealousy, distrust, an overdose of ‘family,’ and a slight case of mental illness against it, this marriage has as much of a chance for success as the Penguin against Batman.”

“You kids and a ‘real formal’ adult ball would go together like the Monkees and a minuet.”

“One girl’s wet blanket is another girl’s comforter.”

To an 18-year-old male whose parents won’t let him date: “Nothing will solve your problem faster than the draft. The Army may not be the easiest way to cut apron-strings, but it’s the most effective.”

“If a girl doesn’t stand on ‘Three slaps and you’re out,’ she may REALLY strike out on the fourth pitch.”

“Work on your looks and personality so that fellows will see the sparkle first and discover the sympathy as an added dividend. Change that ‘anxious-to-please’ smile to a friendly grin. Put a swing in your walk and a gleam in your eye. Let men know you’re a female-type girl. That’s all it takes.”

“…males being males, and females being forever feminine, ‘equal rights’ will always be shot full of loopholes.”

“Wild parties make you ‘in,’ all right—TROUBLE!”

“This ‘Pill for All’ bit is something like letting girls visit in men’s dormitory rooms. Much drumbeating, but where it’s allowed, who visits? Almost no one.”

“A kiss shouldn’t make promises a girl doesn’t plan to keep, and if it’s lacking in ‘technique,’ so much the better. As I’ve said before, a kiss is like a salesman’s spiel: If it’s too perfect, you suspect he’s had so much practice he couldn’t possibly be sincere.”

Other Weird Words of Wisdom Posts You Might Enjoy:

“Take It on the Chin, Gal” Edition

4 thoughts on “Weird Words of Wisdom: A Swing in Your Walk and a Gleam in Your Eye Edition”