Welcome to this Easter weekend edition of Family Affair Friday! Best wishes to everyone who is celebrating the holiday.

This week’s Davis family adventure opens upon a gushing Cissy.

Her facial expression in this capture just cracks me up.

She’s telling a friend about a brilliant and successful male of her acquaintance. Uncle Bill assumes she’s talking about a boyfriend, but when she hangs up, she tells him that he was the subject of her conversation. She’s impressed by the huge, gaudy trophy he’s received for “best achievement in construction engineering.”

Bill is irritated to learn that Buffy and Jody are attending a Punch and Judy show with Mr. French. It’s Thursday, Mr. French’s day off. 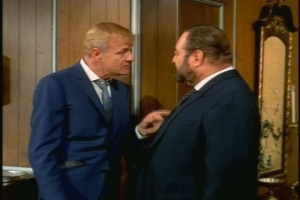 When they return, Bill gives French a talking to about letting the twins cajole him into giving up his day off.

Bill agrees, but he adds that the kids shouldn’t run everyone’s lives. To make his point, he informs the twins that he will be too busy to read to them after dinner.

“You kids have got to stop thinking about yourselves all the time,” he tells them. Making himself unavailable on a day when French has already assumed extra child-care duties seems like a strange way of getting this point across. (After this conversation, French heads off to make dinner. Maybe “day off” meant something different in the ’60s than it does now.)

The twins take Uncle Bill’s comments in stride and head to the den to watch Captain Hippopotamus. Cissy is already in there, trying to find a home for Uncle Bill’s trophy. (The den is a good idea. The trophy won’t make the room look any worse.)

After Cissy leaves, the twins decide they will make Uncle Bill an award for being the world’s best uncle. Jody borrows some modeling clay from his friend Peter, and they get to work on the award that night. 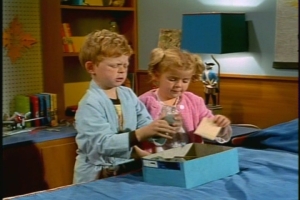 Buffy’s job is making the card, while Jody is sculpting a model of the earth. Since this is basically a big ball, it’s surprisingly how long it takes them to complete this project.

Of course, they have to deal with many interruptions. For example, Uncle Bill comes in to continue his lesson on consideration for others. He informs the twins that he will not be taking them to the zoo over the weekend. 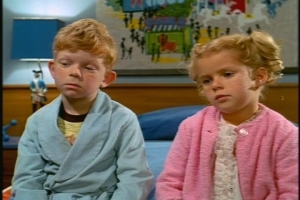 Buffy and Jody are not impressed.

Actually, they don’t really care. They’re just eager for him to leave so they can get back to working on their project.

The next morning, Jody is doing a lot of scratching at the breakfast table. A concerned French mentions the issue to Uncle Bill, who agrees that a trip to the pediatrician is in order. Bill’s not worried enough to take Jody himself, of course–that’s French’s job. 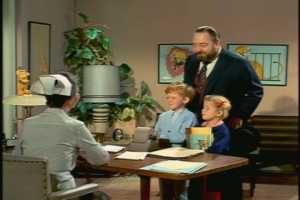 Their doctor’s lobby is cute, but surprisingly empty. They don’t even have to sit down and wait–they walk right in.

The doctor says he will have to run allergy tests on Jody. Unfortunately, he also causes a lot of trouble by suggesting that itching is frequently caused by trauma or frustration.(I can see now why his office is so empty.) 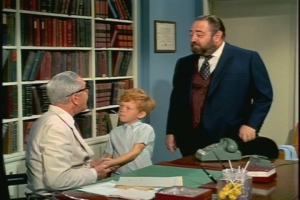 French passes along the doctor’s suggestion to Uncle Bill, who immediately decides that his refusal to take the kids to the zoo caused the rash. He reverses his decision about the outing, which dismays the twins–they want more time to work on their project.

At the zoo, Bill is perplexed–Jody is still scratching, and Buffy starts doing it, too. (I know thing were formal in 1960s, especially in big cities, but isn’t Jody’s suit a little much for the zoo? Even Uncle Bill ditches his tie for the occasion.)

Later, at the apartment, the pediatrician drops by with a likely explanation for the problem–an allergy to modeling clay. It seems he’s been treating the Davises’ neighbor Peter for the same problem. (What the heck was in that clay?)

When Uncle Bill asks the twins if they’ve been playing with Peter’s modeling clay, they make an earnest denial. The doctor, however, notices something.

Uncle Bill is angry and sad that the twins have lied to him for the first time. Soon, however, the twins present him with their finished award.

Uncle Bill grows misty reading the card: “To the bestest, nicest, terrificest uncle in the world.”

They didn’t lie to him; they were working with the clay, not playing with it, the twins explain innocently.

I always enjoy shows in which parents punish kids for something that turns out to be selfless behavior–this is just like the “Father of the Year” episode of The Brady Bunch. I guess it’s my inner child that still likes to see authority figures have to eat their words.

Dr. Felsom: Oliver McGowan. Miss Dana: Templeton Fox. Here’s a coincidence: McGowan was in the “Father of the Year” episode of The Brady Bunch. He’ll appear again as a doctor on Family Affair. Templeton Fox was the mother of Fleetwood Mac guitarist Bob Welch.

“Young ladies of breeding do not say ‘bopped.'”–French

Photoplay, August 1969 (Normally, I crop out the ads, but the one atop the fourth page intrigues me so. “Delayed menstruation”? Hmm.)