Welcome to this delayed edition of Family Affair Friday. The delivery of my new laptop has been delayed indefinitely, so I’m writing this post under difficult conditions. I hope I don’t do a ba-a-a-a-a-a-d job.

The real Mr. French is back! 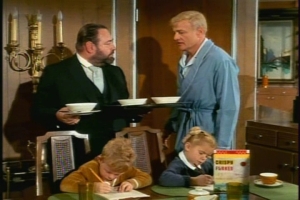 At first glance, he seems to have gotten a little sloppy, leaving the Crispy Flakes box on the table like that. Don’t worry–the box is actually there to inspire Buffy and Jody.

The twins are entering a Crispy Flakes contest because they want to win a houseboat (nice prize!) They have to describe why they like the cereal in 10 worlds.

Uncle Bill leaves to spend a couple of days working in Tampa, and that Crispy Flakes is must be one efficient outlet because they name their winners before he gets back!

The hairiest man alive calls the Davis household to announce that Buffy and Jody won a prize. (Seriously, check out that arm. Ewwww.)

Next thing you know, there’s a delivery man at the door.

Oh, how I missed those Cabotian reactions.

Jody and Buffy fall in love with the lamb, of course. I don’t blame them–it’s adorable!

Poor French is left to consider practical matters, like where and how to keep the lamb.

Uncle Bill, reached by phone, doesn’t offer French much guidance. It’s easy to take things like lambs in stride when you’re hundreds of miles away.

By the way, his Tampa work space looks a lot like every other out-of-town work site he’s visited.

Buffy and Jody name the lamb Snowball and do their best to take care of it. An old-school wooden playpen, borrowed from Miss Faversham, becomes its new home.

When Uncle Bill returns to New York, he tells French that he plans to donate the lamb to the Children’s Zoo. His first attempt at breaking the news to Buffy and Jody fails, however.

Well, it would take a strong man to overcome such cuteness.

May I digress from the plot for a second? Would it be so difficult for Uncle Bill to carry his own suitcase to his room when he returns from Tampa? French has been up to his neck with kids and lambs, for God’s sake.

That night, it becomes apparent that the Snowball situation is unworkable. Left on the terrace, a lonely Snowball engages in some pitiful bleating.

Uncle Bill’s neighbors are not exactly sympathetic to the lamb’s plight–or the Davises’.

The only thing that quiets Snowball is the reassuring presence of Mr. French. Guess who has to sleep on the terrace? 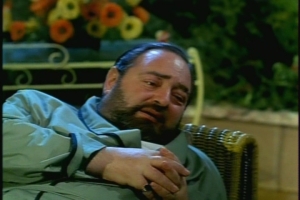 Here’s French, questioning his life choices. Bill couldn’t have brought him a pillow and blanket? He’s going to wake up with wicker marks on his face.

The next morning, Buffy and Jody take Snowball for a walk before anyone else gets up. I did wonder where Snowball was, um, relieving himself. But I also wonder whether two six-year-olds should be wandering the streets of Manhattan with only a lamb for protection.

They don’t even have the lamb for long. “Snowball runned away,” as Buffy says during one of her stupider moments.

Uncle Bill becomes concerned when the kids are still gone after two hours. He gets a call from the Humane Society, which picked up Snowball in the park. The dejected twins return to the apartment a few minutes later, but they are glad to hear that Snowball has been found.

Uncle Bill takes the kids to see Snowball at the very Family-Affair-green Humane Society. Now, how and why the Humane Society has that little farmyard set-up in the middle of their floor, I can’t imagine.

Uncle Bill tells the kids how lonely Snowball has been for other lambs, and he gently guides them into embracing the Children’s Zoo ideas as their own. His parenting skills are really growing!

I love the lamb and the tender way Buffy and Jody care for it. Buffy even gives Snowball Mrs. Beasley’s blanket to sleep with. It’s also fun to see Sebastian Cabot again.

He’s barely accepted his role as a nanny–he’s far from ready to be a “lamb nanny.”

In the world of television, Olan Soule appeared in everything…absolutely everything. Trust me.

Annette Cabot, playing the Wolfman’s secretary, is the daughter of Sebastian Cabot.

Cissy refers to the Velvet Vultures. (She calls them “the epitome of folk jazz.”)