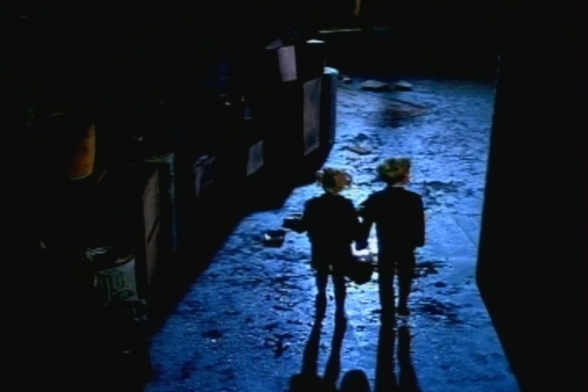 Welcome to another installment in my weekly Family Affair series.

Ted Gaynor and his wife are leaving on a cruise, and Uncle Bill, the Davis children and Mr. French are all seeing them off. 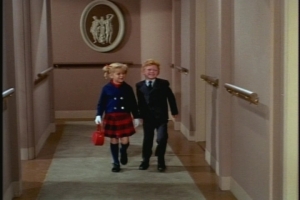 You can tell from the twins’ wardrobe that this episode will have a high cuteness quotient. Look at Buffy’s outfit: The purse! The knee socks! The little white gloves!

While French and Cissy are elsewhere, Buffy and Jody hear Uncle Bill inviting “everyone” to dinner. He is talking to some clients who have joined him at the Gaynors’ bon voyage gathering, but the twins assume that the invitation includes them.

They run off to tell French and Cissy that they’ll be leaving the ship with Uncle Bill. This news delights French and Cissy–he wants to meet Miss Faversham for a poetry reading and she wants to attend a Velvet Vultures concert with Freddy. 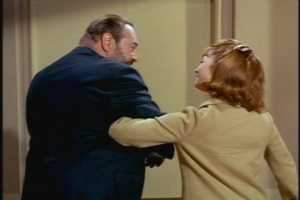 These two are so relieved to escape child-care duty that they fail to question the plausibility of Bill inviting Buffy and Jody to a dinner with clients.

After French and Cissy leave the ship, Buffy and Jody quickly realize that Uncle Bill has departed, too. Disembarking alone, they watch the ship sail away and then ponder their next move. 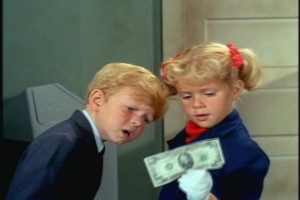 At this point, the twins find a $20 dollar bill. Bright children might realize that this money could help them get home. In this episode, however, Jody and Buffy (who has previously been shown doing multiplication) are so dim that it takes them a while to realize that a 2 and 0 together make 20.

Thinking of a story in which Abraham Lincoln walked three miles to give back a nickel, the twins determine to find the money’s owner. Two exceptionally naive six-year-olds wandering around lower Manhattan waving money–no potential for trouble here. 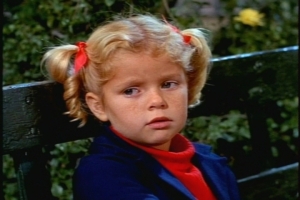 Before long, the kids are hungry and tired.

Luckily, as the ship was pulling away from the dock, Mrs. Gaynor spotted Buffy and Jody standing alone. Eventually, she convinces her skeptical husband to contact Bill and check on the kids. 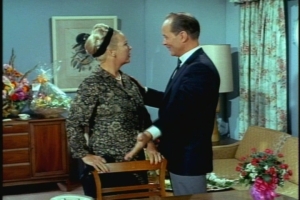 We’ve seen Ted Gaynor several times, but this is our first look at Mrs. Gaynor. Ted totally seems like the kind of guy who would dump her for a younger model.

Over a three-hour period, Uncle Bill tries to call home but gets no answer. 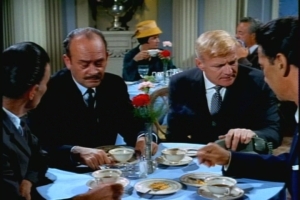 Concern about what’s happening at home preoccupies him when he finally goes out for dinner with the clients he talked to earlier.

Finally, he calls Scotty the doorman and learns the French returned from the ship alone and then left the apartment again at 3:30.

(Here’s what I don’t get–French must have left the ship by around 3 p.m. at the latest. Didn’t it seem odd to him that Uncle Bill was going to “dinner” at that hour?) 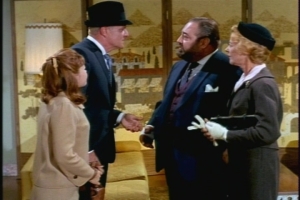 By the time all the adults meet up again, panic has understandably set in. 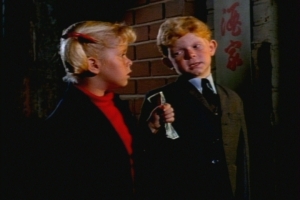 Meanwhile, darkness has fallen and the twins are scared–so scared that it occurs to them that getting home should really be their first priority, rather than finding the money’s owner.

At last, the kids meet a kindly stranger who helps them find their apartment. 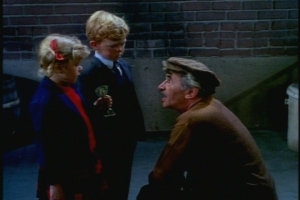 How he manages to get the twins home is a mystery, since they don’t know their phone number or their address or even the name of their street, except that it has a 6 and a 2 in it. Sheesh–and they let these kids wander freely around their own city block! Uncle Bill isn’t kidding when he makes all those speeches about not knowing the first thing about parenting.

Somehow, the twins do make it home, to everyone’s relief. Buffy offers her benefactor the $20, and Uncle Bill encourages the reluctant man to take it as a reward. He also promises the man, who is a stone mason, future work opportunities. 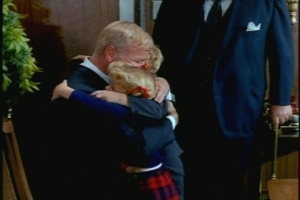 Uncle Bill reassures the kids that he’s not mad at them. If I were him, I would be pretty pissed at French–he should never have taken off without confirming the children’s arrangements.

Implausibilities and inconsistencies aside, this is a favorite episode of mine. It’s scary to watch Buffy and Jody wandering the big city on their own. It’s also touching to watch Jody comforting a scared Buffy. 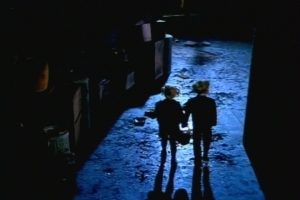 I like this dark alley shot–it’s a change from your usual Family Affair atmosphere. 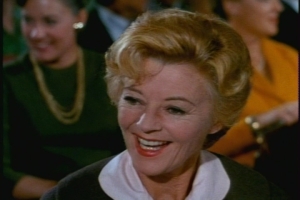 Vic Tayback’s policeman from Episode 8 returns. We also get Scotty, Ted Gaynor, the Velvet Vultures, a Freddy mention, and a (fuzzy) reference to the Davis address.

“Maybe New York is a foreign country.”–Jody, after he tries to communicate with a French couple in the park.

(Actually, New York was like a foreign country to me when I watched this show as a kid. Episodes like this fascinated me because they gave me a glimpse, admittedly distorted, of how city kids lived.)