Welcome to another installment in my weekly Family Affair series. I’m sorry that it’s late. My husband had to use our laptop last night for actual work–the nerve!

Something’s bothering Cissy. What could it be? 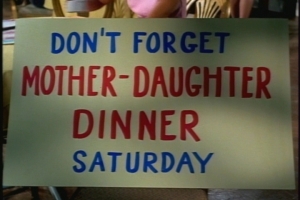 If being an orphan isn’t bad enough, she has the least tactful group of friends ever. This is only a slight paraphrase:

Friend 1: Is your mother coming to the dinner, Cissy? Oh…right, sorry.”

Friend 2: Don’t worry, we have a father-daughter dance in the spring! Oh…yeah, sorry.”

Cissy even has to listen as the girls complain about their own mothers.

And, to make matters worse, some of her sketches will be on display at this dinner she can’t attend. Did you know Cissy is an artist? Well, she is, as we’ll see shortly.

She hides the reason for her sadness from Uncle Bill, but he knows something is bothering her and wants to help. He spends a lot of time worrying and lamenting his lack of parenting skills. How concerned is he? On his one evening home between two business trips, he actually cancels a date to spend time with Cissy. 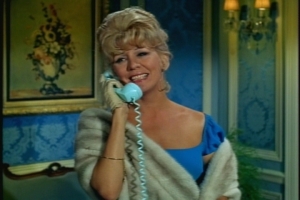 As it turns out, Cissy has a date of her own, so Bill tries to mend fences with an unforgiving Miss Cantelli. God forbid he should spend his evening with Buffy and Jody. Hey, they’re not having a major emotional crisis this week.

The next day, as Bill prepares to head for the airport, he’s still clueless about what’s bothering Cissy. Even his suggestion of retail therapy doesn’t help. Cissy’s response is one that few teenage girls have ever uttered: “I have more clothes than I need.” 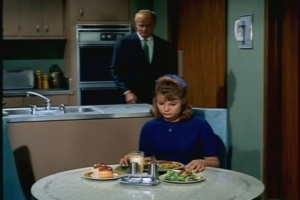 She’s so upset she doesn’t even touch this hearty meal French has prepared for her.

At the airport, he meets Miss Cantelli, who’s willing to make nice with him if he apologizes and joins her for dinner.

They should have saved this episode for St. Patrick’s Day. Green is everywhere.

Just then, however, he runs into Cissy’s friend Gail, who fills him in about the dinner.

My God, what’s that on Gail’s head? It’s not even the same color as the rest of her hair.

Bill quickly enlists French’s help to maneuver Cissy to the airport, where he spends some quality time with her without letting her know that he knows about the banquet.

Cissy is very impressed by this “fancy” airport restaurant.

They have a warm conversation, and at one point Uncle Bill offhandedly refers to her has his daughter, rather than his niece.

Cissy is so moved that she dashes off this sketch of Uncle Bill in about two minutes.

Watching this scene warms even the cold, cold heart of Maria Cantelli, who was angry about being rebuffed for a second time.

This is another nice Cissy-Uncle Bill episode; the part where he calls her his daughter is especially touching. Occasionally, though, Kathy Garver’s admiring-niece portrayal strays uncomfortably close to girl-with-a-crush territory.

When Cissy was 12, she wanted to be a nurse.

This episode makes specific reference to the death of the kids’ parents.

Ted Gaynor gets a mention.

“If Cissy marries Freddy, will he be our brother or our uncle?” Buffy 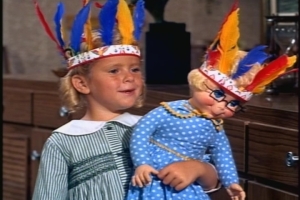 Random twin image: Buffy and Mrs. Beasley, who are playing cowboys and Indians with Jody.