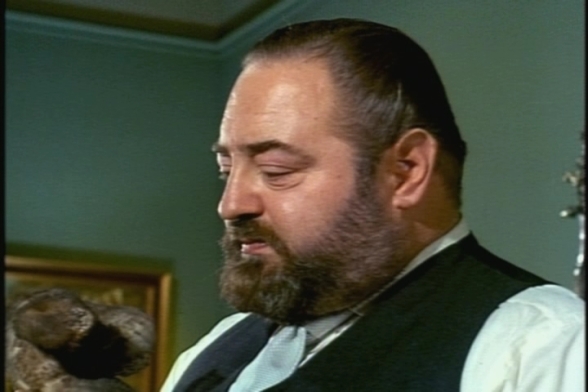 I apologize for the lateness of this week’s entry in my Family Affair series.

Cissy’s attempt at a composition about Mr. French leads her to the conclusion that people are truly unknowable (rather a pessimistic thought for a TV teen).

At least Cissy’s classmates find her composition interesting.
Well, maybe that one in the front left does.

Her teacher challenges her to find out more about Mr. French, and Cissy begins a great deal of snooping.

All she gets from French’s frenemy Withers is a description of French as “opinionated, stubborn, aloof, difficult, and stiff-necked.” Oh, and apparently French becomes unhinged if you mention “Old Bertie.”

So what does Cissy do next? Confront Mr. French about Old Bertie, of course. 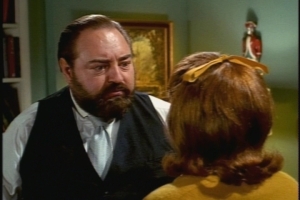 French’s reaction is painful to behold. You’d think this might stop Cissy, but no…

She really crosses the line by pretending to check his credit references with an old lady he secretly visits every Thursday. When Cissy confesses her true identity, Mrs. Allenby tells her the sad truth: Mr. French was once in love with a girl who died in the London blitz.

And “Old Bertie,” a name that provokes a strong reaction in French? It’s a stuffed dog he won for his girl and the only trace of her he found after the blitz. Cissy vows to keep the secret and refrain from violating the privacy of others.

It’s painful to watch Cissy nosing around in the life of someone who so clearly values privacy (and what kind of teacher would turn a student into a junior Kitty Kelly?).

The teacher in question. Between her and the teacher we’ll meet next week, I’m wondering if public school was such a good idea.

Sebastian Cabot does a wonderful job conveying hurt and indignation when Cissy confronts him with the name “Old Bertie.” Cissy really goes over the line by pumping Mrs. Allenby for information, but watching her realize that she really would rather not have known the sad truth is gratifying. 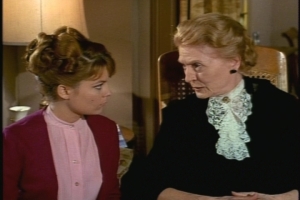 It’s wonderful to get some back-story on Mr. French, and a scene between him and Old Bertie and Buffy and Mrs. Beasley is sweet.

Mr. French was born in the West End of London. His father and grandfather were both butlers. He has worked for Uncle Bill for nine years–they met when Uncle Bill was working on a project in London. Mr. French’s first name is Giles, and his day off is Thursday.

Cissy: “It kind of scares me…I mean, trying to get personal with Mr. French.”

An article about Sebastian Cabot from Photoplay, October 1967.