Welcome to the latest installment of my weekly Family Affair series!

Later, Jody accompanies French to an Italian grocery and witnesses his friend Pepino being spanked for breaking a window.

Pepino gets tough love from his father, a character who apparently escaped from Life with Luigi

When Jody expresses his confusion, Papa Umberto explains that he punishes his son out of love.

Pepino himself seems less convinced about the spanking=love argument.

Suddenly, Uncle Bill’s patience begins to seem like indifference, and Jody tries to provoke a spanking. 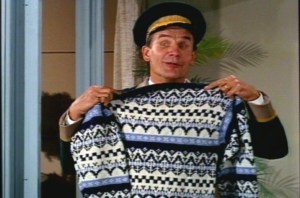 Jody’s second transgression is disturbing the chess game Mr. French is playing by mail. But what finally sets Uncle Bill off is his worry when Jody runs away at night (though Jody never actually leaves the building).

Uncle Bill delivers a stern–though not physical–punishment but promptly begins to doubt himself and relent. Finally, he realizes where Jody’s coming from and gives the boy a punishment and a gentle spank (“for thinking for one minute that I don’t love you”).

Preparing to lay the smack down.

This episode shows why Brian Keith’s Uncle Bill is such an ideal father figure–affectionate, playful, understanding. In these early episodes, Uncle Bill is warm and demonstrative with Jody in a way that seems unusual and refreshing for a 1960s TV father and son.

Johnny Whitaker is also adorable in this episode, especially in the scene at the end when he’s waiting for his spanking with closed eyes and gritted teeth. 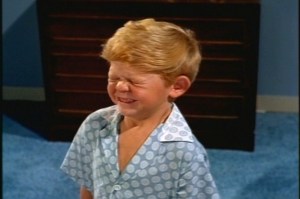 Is this cute or what?

Uncle Bill’s self-doubt with regard to parenting is realistic and continues the theme of adjustment which has been building all season.

Okay, this is a Jody episode, but how about a little random Buffy cuteness?

“I wish I could get Uncle Bill to love me enough to sock me.”–Jody

“When he socks me, half of it will be yours.”–Jody to Buffy

“An apology is the act of a real man when he knows he’s wrong.”–Uncle Bill

So manly and rugged and yet so gentle and loving with kids…sigh.

This might be a little hard to follow. TV Radio Mirror April 1969 featured two articles that both had a split focus on Brian Keith and Diahann Carroll. The “TV Kids” article is worth reading, especially for the description of interaction between Keith and Johnny Whitaker.

(The other headlines on this magazine cover are ridiculous, and why did they use a cover photo that showed Anissa Jones at such a disadvantage?)

9 thoughts on “Family Affair Friday: Season 1, Episode 12, Love Me, Love Me Not”