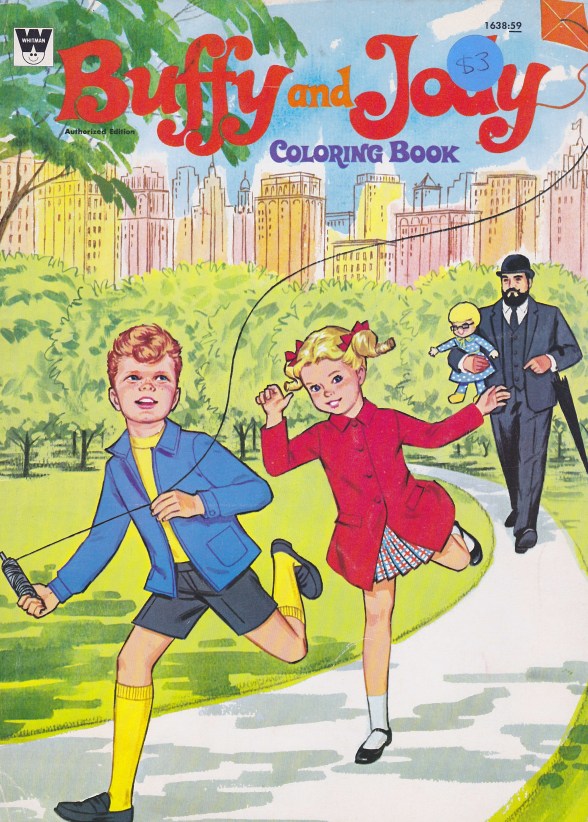 I’m back this week with a full installment of my Family Affair Friday series.

The school vice principal, Miss Bryant, tells Uncle Bill that Buffy and Jody are completely dependent on each other and should be placed in separate classrooms. Uncle Bill resists at first, saying that being orphaned, separated for a year, and then shipped to a new home in strange city might be enough adjustment for the time being. Ya think?

All the stress drives Uncle Bill to his cigarettes, and sets him to whining about the challenges of sudden parenthood.

He takes the twins to child psychologist Edith Morse, who agrees that the twins need to develop individual interests.

If Dr. Morse was so smart, would she really choose the ugly Family Affair green for her office walls?

They are separated at school and shepherded into separate past-times, but they remain united in their imaginative play.

At recess, Jody pretends he’s traveling in a spaceship. 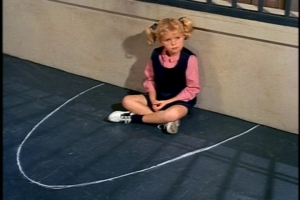 Jody does find a friend, Peter.

It’s surprising that Jody found a friend first. He’s usually portrayed as the less competent twin, in every way.

Buffy’s attempts at friendship fail, however, and she’s morose.

Finally, the kids concoct a case of the measles to avoid school altogether. 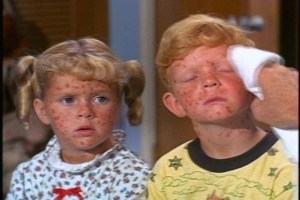 Uncle Bill decides to trust his instincts and reunite them.

At the beginning of this episode, I was indignant at the experts who wanted to split up twins. By the end, Buffy’s complete inability to function without Jody did seem worrisome.

She would appear on one more episode of Family Affair. Randy Whipple appeared in no less than 11 episodes. He also played one of Jerry Van Dyke’s kids in My Mother the Car. 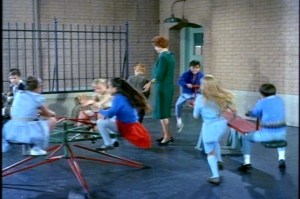 PS 724 has a really crappy playground.

Jody’s turtle gets another mention.

Uncle Bill actually takes the kids to the park himself–twice!

In honor of the U.S. presidential election this week, I present a photo that unites Family Affair and the American presidency. This Associated Press photo shows Anissa Jones getting up close and personal with President Lyndon B. Johnson during a Christmas Seals event on November 12, 1968. I can’t decide if this photo is sweet or creepy.

The caption reads: KISS FOR TV STAR–President Johnson kisses Anissa (Buffy) Jones, 10-year-old television star, after receiving the first sheet of Christmas Seals today at the White House. The President who is holding the Seals in his hand, also received from Buffy a rag doll which the junior actress named “Mrs. Beasley.”