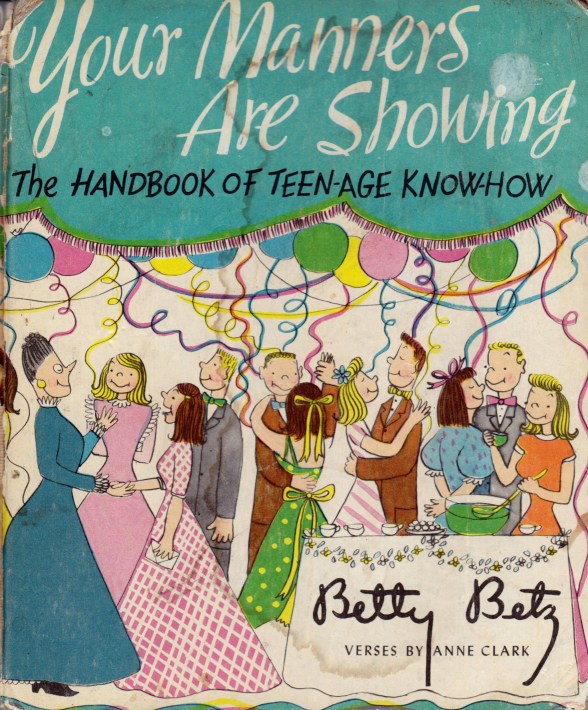 This is the latest installment in my Weird Words of Wisdom series.

“As mother used to say, ‘Be pretty if you can, witty if you must—and pleasant if it kills you!’”

Your Manners are Showing: The Handbook of Teen-Age Know-How, 1946
By Betty Betz

About This Book: Your Manners are Showing differs from most vintage teenage advice books in one key way—it shows teens how to behave with copious illustrations by Betty Betz. Verses by Anne Clark accompany the pictures; in between the illustrations, Betz provides short chapters on topics ranging from money to “vice” (drinking and smoking). Etiquette in verse actually strikes me as a pretty handy aid for mastering tricky concepts, like who gets introduced to whom.

About the Author: Where do I begin? Betty Betz journeyed from Hammond, Indiana, prom queen to 1940s and ’50s queen of all media. She was a Midwestern swimming champion, and her high school classmates named her Most Popular Girl in their school of 1,800. She attended Sarah Lawrence College and earned a guest editorship at Mademoiselle, which became the first magazine to publish her drawings. She went on to work for Esquire and Harper’s Bazaar. Eventually, she began to specialize in teenagers, writing a syndicated advice column for them and publishing several books. Her illustrations of teenage life turned up on everything from stationery to scrapbooks to jewelry boxes.

She was married briefly to Josef Lanz, the Austrian fashion designer who popularized the dirndl dress, a 1940s teen wardrobe staple. His family owned Lanz of Salzburg, which still exists, producing mostly nightgowns.

In 1956, she married her second husband, Frank McMahon, whom Time described as an “oil-rich Calgary wheeler-dealer.” She raised two daughters and settled down into a life of charity work and Palm Beach socializing. Betz died in 2010.

Among the other highlights of her brief career:

For the most part, I’ll let Betz’ illustrations (and Clark’s verse) speak for themselves. I can’t resist including a few quotes, though.

On tipping: “At least ten percent of the total bill is a sufficient tip, but never leave less than ten cents per person.”

On saying goodnight: “There’s no excuse for a couple to stay out past midnight except for special parties, so make those good-nights short and sweet. Dawdling on the doorstep doesn’t get you anything but a razzing from the neighbors, and a black mark from the girl’s folks.”

On fashion for boys: “You’re no Percypants if you are particularly particular about which tie you wear with what suit, so give your clothes combos a little more thought…The best clothes for men are the traditional ones which never go out of style, so if (a salesman) tries to sell you Seabiscuit’s blanket for a sports jacket, tell him to give it back to the Indians.”

On shoes for boys: “If they’re scuffed with run down heels they label you right in the jerk department, so keep your booties laced and polished. When you buy shoes, get the strong and sturdy type which look more manly and last longer than the ‘cute and fancy’ styles. If it’s a dressup party, don’t wear your saddle shoes or moccasins, and never wear rubber soles for dancing.”

On fashion for girls: “If you think you can wear that dress three years from now and still adore it, it’s a good buy. But if it’s a poorly made ‘gag-rag,’ then don’t waste your money.”

On shoes for girls: “Exaggerated heelless or toeless siren sandals are downright unattractive on young legs, so avoid them.”

On girls’ accessories: “A neat purse, immaculate gloves, fresh handkerchiefs and simple, becoming hats are the classic equipment of fastidious and fascinating femmes.”

On where girls should turn for dating advice: “Say, your mother should know a little bit about it, since she managed to snare herself a pretty nice husband, and probably over some pretty high competition, too.”

Acceptable gifts for boys to give girls: Books, records, candy, flowers, a compact, or “your best photograph (unautographed, please).”

Traffic advice that cracks me up: When crossing streets, boys should walk on the side closest to traffic, “so that if there’s any mishap, he gets hit first.”

Wow! A Password?!: “There’s a password, ‘cabbage,’ which is used every time a boy doesn’t take the curb side of the sidewalk when he’s walking with one or more girls. Actually, there’s no need for a password, because every young man should automatically take the outside place without even thinking twice.”

On smoking: “If you like the taste of tobacco and your parents approve, there’s nothing harmful about smoking in moderation.

On drinking: “Light wines and beer are your best bet if you must drink something alcoholic. My favorite is a ‘Sherry Cobbler,” which sounds like a grownup drink, but actually is a plain lemonade with a little wine added.”

Recommended non-alcoholic drink if you want to appear to be drinking alcohol: A “Horse’s Neck”—ginger ale, with a slice of lemon peel.

On conversation: “My Mommy done told me that as long as I wasn’t really a brain-box, I should develop my ear for listening.”

And a final thought: “The trouble with etiquette books is that they’re like dentists…you never pay any attention to them until you’re in agony, and then often it’s too late.”